Dallas Stars forward Rich Peverley collapsed on the ice, and everybody at American Airlines Arena went silent – as did I.

I remembered reading about how Peverley had heart surgery for an irregular heartbeat earlier in the offseason, and was hoping this incident wasn’t cardiac related. Reports would later surface Peverley, then 31 years of age and in great physical shape, had a cardiac episode and had to be resuscitated with a defibrillator. The whole thing hit me hard.

I’ve always had heart problems. I was born premature, at just over three pounds, and had many cardiac related surgeries. As a baby I had an irregular heartbeat and had a balloon installed to repair a hole in a valve. Growing up, there were limitations to how much I could physically exert myself, but I had a fairly regular childhood.

Fast forward to 2012, I kept passing out randomly and spending nights in the hospital. Doctors would tell me they weren’t sure the exact reason why it was happening, so I was set up with a specialist. That specialist told me to have a routine minor surgery, electrophysiology study and ablations – where they’d stick a wire up my groin, and shock my heart to test how it would react to the stimulation. During that surgery, my heartbeat went dangerously high and I had to be shocked on the table. It sucked. It was the worst pain I’ve ever felt, bar-none.

After the surgery, my doctor moved forward with installing a defibrillator (technically an implantable cardioverter-defibrillator) in my chest. I ended up spending almost an entire month in the hospital. 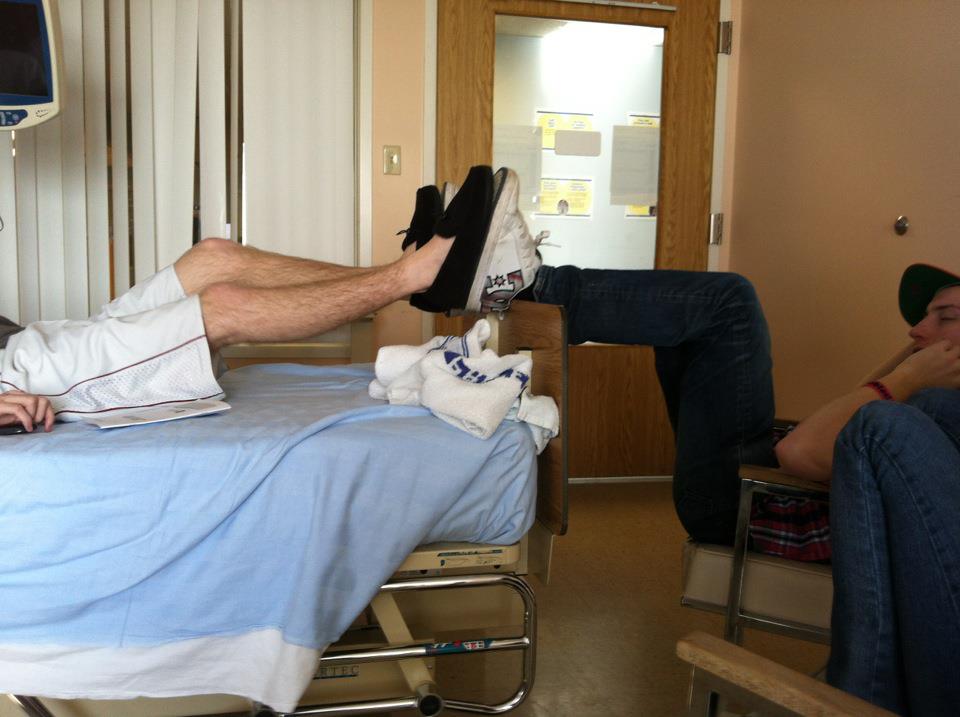 Thankfully I had great, supportive friends and family.

To this day, I have trouble watching the video of Peverley passing out. Seeing the game stop, the worried looks on players’, coaches’ and fans’ faces alike, the announcers struggling with what exactly to say … it all makes my stomach turn. I remember when Detroit Red Wings defensemen Jiri Fischer passed out during a game, and how unsure everybody was that he was going to be OK. That same anxiety stuck in my brain. I just wanted to hear Peverley was OK.

Thankfully, despite almost dying in the arena, he was alive.

Peverley had successful heart surgery and had a similar implantable defibrillator installed as mine.

Ultimately, the NHL is a pro sports league where their goal is to make as much money as possible. It’s easy to forget that players are real people. They go home after work, to their friends and family, just like everybody else. It’s not surprising that many players were irked by what had happened, so it was encouraging to see them express public support for Peverley to have a speedy recovery.

Hope all is well with Rich Peverly. Doesn't matter who you cheer for, let's all think about him and his family at this time.

Everyone take a moment to think about our dude rich peverly…what a warrior!

Wins and losses aside the NHL is a small community. I think we can all say our thoughts are with Peverley and his family. #getwell

Peverley’s career sure seemed like it was over. Well, that may not be the case.

Today, TSN’s Bob McKenzie in a series of tweets reported that Peverley wants back in the NHL.

It's been 14+ months since Rich Peverley's life was saved when heart stopped during NHL game. He MAY now be in position to consider comeback

…but, for now anyway, the story is that some encouraging medical news has Peverley at least looking hard at the possibility of comeback.

Peverley's contract with DAL expires June 30, so if he can overcome medical/insurance hurdles, he could be UFA this summer.

You have to commend Peverley for wanting to lace up the skates again.

Whether or not he comes back and plays at the level he was playing at before, it would be a remarkable achievement if he ever steps foot on the ice again as an NHLer. At the same time, if I was in his shoes, I’d struggle a lot with the idea of getting rid of my defibrillator. Every day those machines save lives and they’re a great fail safe for those with unpredictable cardiac issues. It makes me sleep easier at night, knowing it’s there. It’s possible he’s healthy and will not have cardiac issues again – but even still – that would be a big, scary step forward.

When I wake up in the morning and see the surgical scar above my heart, it’s a reminder that life is precious. I’m sure Peverley thinks the same way. Whatever he does next, I’ll be cheering for him.