Steve Simmons of the Toronto Sun penned a column this morning which suggested Steven Stamkos may have changed his mind about re-signing with Tampa Bay. He says Stamkos was once certain to re-sign with the club, but now may walk when he comes a free agent next year.

Now there are at least rumblings. Now there is reason to wonder if Stamkos will want to stay in Tampa Bay on a team that hasn’t treated a superstar like a superstar in the playoffs. A week or so, it was assumed, basically assured Stamkos would re-up long-term with the Lightning. The circumstances have since changed.

In the column Simmons gives many reasons why Stamkos may be unhappy – such as being put in the box for a too many men call, not playing his natural position of center and having less ice time than five other Tampa Bay forwards. Those are all minor things for such a big domino to fall. 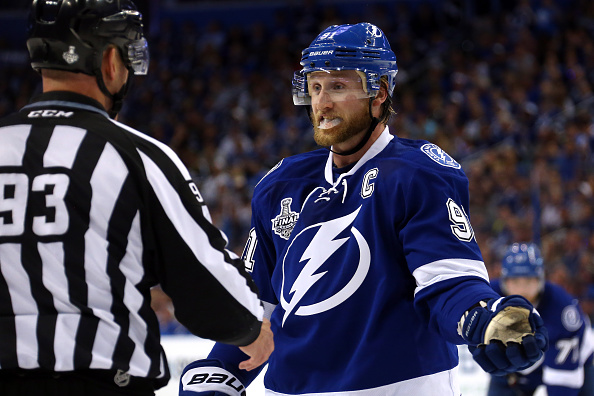 TAMPA, FL – JUNE 03: Steven Stamkos #91 of the Tampa Bay Lightning argues a call in the second period against the Chicago Blackhawks during Game One of the 2015 NHL Stanley Cup Final at Amalie Arena on June 3, 2015 in Tampa, Florida. (Photo by Bruce Bennett/Getty Images)

It would be shocking to see Tampa Bay not re-sign Stamkos. Going forward they’re not pressed up against the cap, and have plenty of room to get a deal done to make him one of the highest paid players in the NHL.

It should be noted that Simmons thinks Stamkos isn’t in John Cooper’s good books, as he wrote a column last week titled “Steven Stamkos clearly not Lightning coach’s favorite.” Here’s an unedited excerpt on how he came to that conclusion.

He wasn’t a difference maker to start playoffs. The he was moved from first line centre to second line right winger. The Johnson Triplets line is clearly Cooper’s favourite. He won an American Hockey League championship coaching two-thirds of them. Those are his boys. He talks about them the way a father brags about his children. Any minute now, you expect him to pull out the baby pictures.

He does says nice things about Stamkos too. He just doesn’t gush about his captain.

But he does play him less. And there are those who believe Cooper favours those who played for him in the minors over those who did not. That may be his coaching comfort zone. It may eventually be his undoing in Tampa.

What I’m saying is, take this rumor with a grain of salt. While it’s not outside the realm of possibility Stamkos leaves the club, I’d be very surprised if he left because of the reason Simmons provides. Steve Yzerman and Tampa Bay management won’t let him walk for nothing – heck, I don’t think they’d let him walk at all.