The Toronto Maple Leafs entered this offseason with a clear direction – to rebuild the right way.

Aside from the Phil Kessel trade, there haven’t been any big moves. For the most part, the Leafs have kept their strategy of signing low-risk, medium reward players like Shawn Matthias, P.A. Parenteau and Mark Arcobello to one-year deals with the likelihood of flipping them later in the season for future assets. It’s a smart strategy. It doesn’t cripple the club financially should things not work out, and it’s an easy way to build assets.

Not only have the Leafs been proactive in free agency, their smaller moves on the trade market have also been impressive. On draft day, Toronto traded Brad Ross and a fourth round pick to the Edmonton Oilers f0r 23-year-old defenceman Martin Marincin.

Here’s a breakdown from the Edmonton Journal’s Jonathan Willis.

Frankly, it’s a shame. Marincin did a lot of things well, and with his combination of excellent mobility and massive wingspan was extremely effective in some areas of the game, most notably defending the defensive blue line against opposition forwards. He wasn’t a flashy offensive player but he also made a good first pass. There aren’t a lot of 6’4″ defencemen with mobility and passing ability available for the low price of a fourth-round pick.

That’s not to say Marincin didn’t have weaknesses. There were rough edges to his game, and the item that came up time and again in Edmonton was his willingness to engage physically. Marincin is a positional defender and at times lacked the necessary urgency to defend the front of the net; he was not consistently physically competitive.

Here’s the HERO chart breakdown of Marincin, which shows just how valuable he can be. 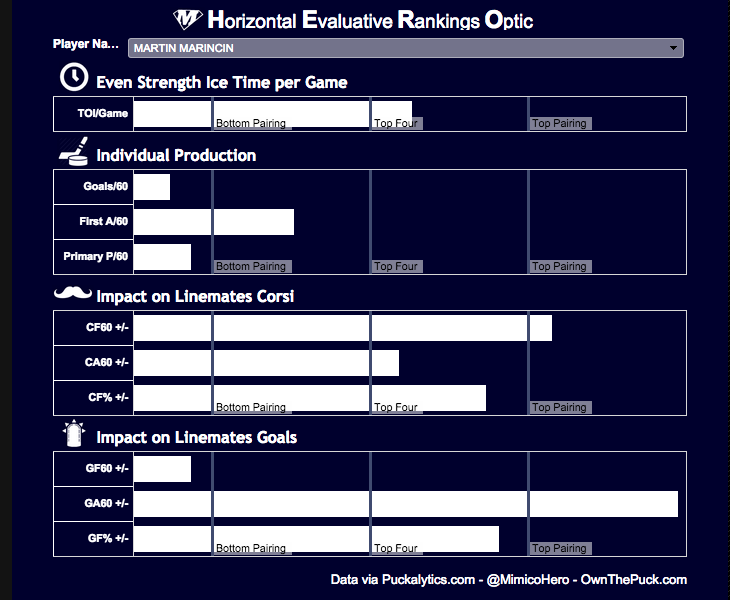 The return for the Oilers is underwhelming. The team used the fourth-round pick to acquire Eric Gryba from the Ottawa Senators. Is Gryba better than Marincin? No. The other part of the deal for Edmonton, Brad Ross, is a non-factor. He’s a former second-round pick that’s done nothing at the pro level aside from get suspended for substance abuse and isn’t expected to ever play an NHL game.

The Leafs get a legit defenseman who’s young enough to get better, but old enough the make a nice impact.

The other small move the Leafs made yesterday was trading AHL grinder Jamie Devane to the Nashville Predators in exchange for RFA Taylor Beck. 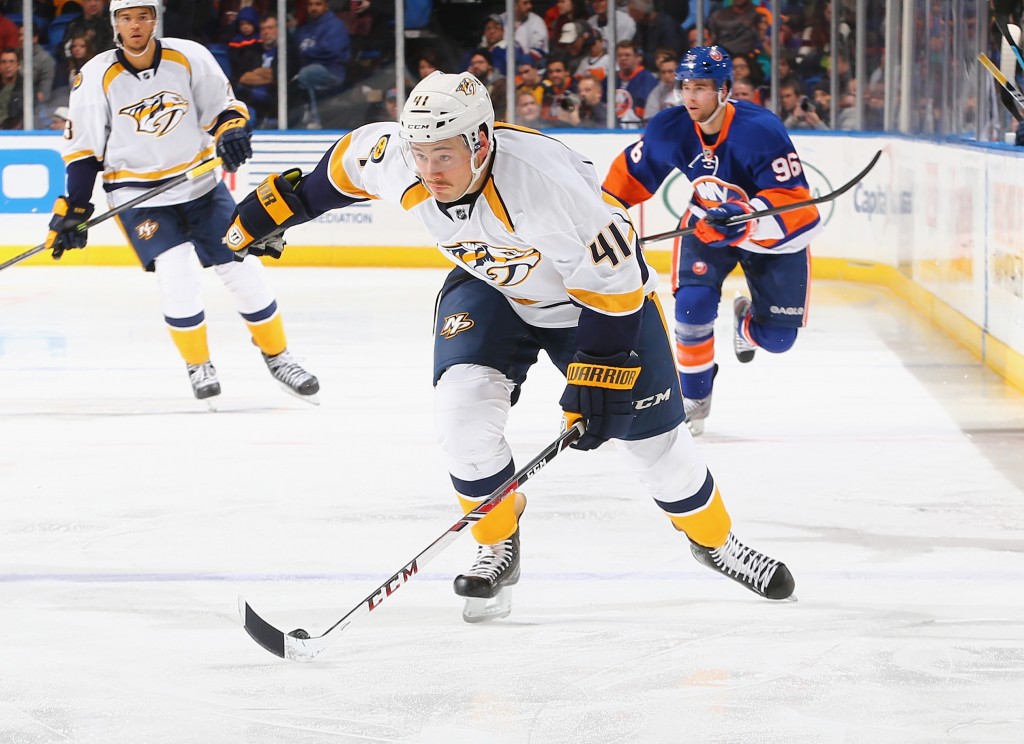 UNIONDALE, NY – NOVEMBER 12: Taylor Beck #41 of the Nashville Predators in action against the New York Islanders during their game at the Nassau Veterans Memorial Coliseum on November 12, 2013 in Uniondale, New York. (Photo by Al Bello/Getty Images)

Beck, who was a restricted free agent, scored eight goals last season for Nashville. He’s not a high impact player. The value here is the Leafs gave up essentially nothing – Devane scored no goals in 39 AHL games with the Marlies – for a 24-year-old with upside. It also doesn’t hurt that he’s got some Leafs connections. Beck played with Richard Panik and Peter Holland in Guelph when he was in the OHL. He also had the breakout game of his career last season against the Leafs scoring 2 goals and three points in a 9-2 Predators win in November that was one of the low points for the Leafs season – which is saying something. Beck can slot in as an effective bottom-six forward for Toronto. Devane? He’s just minor league fodder for Nashville.

These moves may be small, but they illustrate that Leafs management – even without a GM – know what they’re doing. They’re giving up no-name assets for legitimate NHL players. It’s impressive, and for Leafs fans, it’s hopefully a sign of things to come.