After delivering a massive hit against Lubomir Visnovsky in the playoffs last year, the New York Islanders wasted little time in trying to get revenge on Washington Capitals forward Tom Wilson this preseason.

Islanders enforcer Eric Boulton chased Wilson around during the Captials 3-1 victory, hoping he would drop the gloves – to which Wilson refused.

Eric Boulton on Tom Wilson's refusal to fight: "He kept turning me down. He wasn't interested. He was scared to death." #Isles

Wilson admitted to the Washington Post he’s got a lot of respect for Boulton, but made it no secret there’s no reason he should be fighting the 39-year-old.

“I just don’t think there’s any point in me fighting those guys,” Wilson said. “He didn’t play at all last year. He’s probably not going to play at all this year. I’m trying to use these preseason games to get ready for the year. I know there’s always going to be that physical part of my game. But there’s just no need for me to take that guy. Unless he’s running around taking advantage of our guys, there’s just no reason for me to pay any attention to a guy like that.”

Wilson’s 100% right with his comments. He’s not going to fight Boulton just for the sake of fighting – especially when there’s nothing to be gained from doing so. The 21-year-old would prove nothing by doing that. Like Wilson bluntly mentioned, Boulton probably isn’t going to make the Islanders, and if he does it’s just as an enforcer, so why waste his time with him? If Wilson wanted to stir the pot by fighting, he would try to tilt with one of the Islanders better players to get under the team’s skin, something fighting with Boulton wouldn’t accomplish. 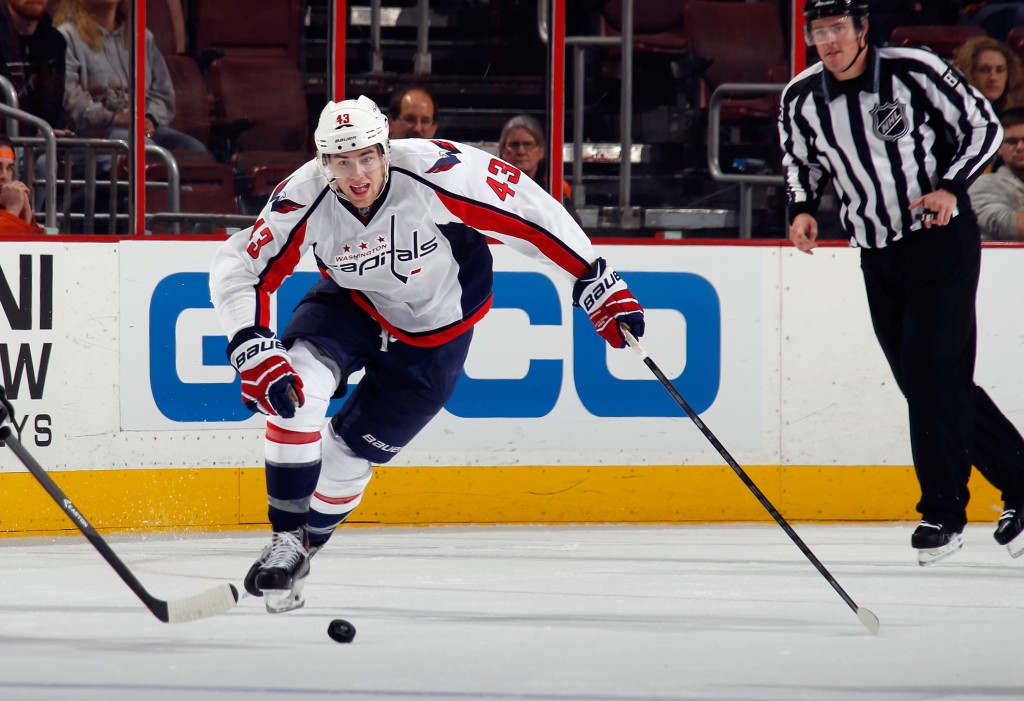 PHILADELPHIA, PA – NOVEMBER 01: Tom Wilson #43 of the Washington Capitals skates against the Philadelphia Flyers at the Wells Fargo Center on November 1, 2013 in Philadelphia, Pennsylvania. The Capitals defeated the Flyers 7-0. (Photo by Bruce Bennett/Getty Images)

It seems Capitals head coach Barry Trotz agreed with Wilson’s inaction, as he rightfully said Wilson fighting would take away from his ice time, while backing that Wilson is still a tough customer.

Said Trotz: “I knew what the situation was with their veteran player. Obviously, Tom had an impact on that series and they’re trying to send a message back. I actually told Tom to back off. There’s no need. I need him to play. I need him to get the ice time. I don’t need him to do that right now.

“He would definitely answer the bell. I don’t think he has any problem doing that. I actually told him to not and just avoid that, but also to be alert, so he doesn’t get jumped or anything like that. He was good. He played 20 minutes. He hasn’t played 20 minutes in quite a while.”

Fighting isn’t nearly as relevant now as it was in the past. It simply doesn’t make sense for a young up-and-coming player to fight Boulton, especially in a preseason game. If Wilson got hurt from the tilt, it would be a totally senseless injury. Boulton chasing him around and calling him ‘scared to death’ is a nice scare tactic on Boulton’s part, but I can’t imagine Wilson refused to fight him because he was scared, he refused to fight him because he isn’t stupid.