The calendar has hit September, which means we’re on the eve of the World Cup of Hockey which is coming up at the end of the month. Former NHL’er David Booth recently tweeted a great idea for an extra team for the tournament:

Hey World Cup of Hockey- is it too late to add an All Buyout Team?

C’mon David. A little late for this idea, no? You should have told Gary this last year and maybe you would have gotten somewhere. The green sweaters with the dollar sign crest would have been epic … and probably the NHL Store’s best seller.

Okay David. Since it’s such an interesting concept, and since you were a buyout victim and a champion for older players everywhere, we’ll take you up on your idea. Let’s come up with the All-Buyout team to compete in the World Cup: 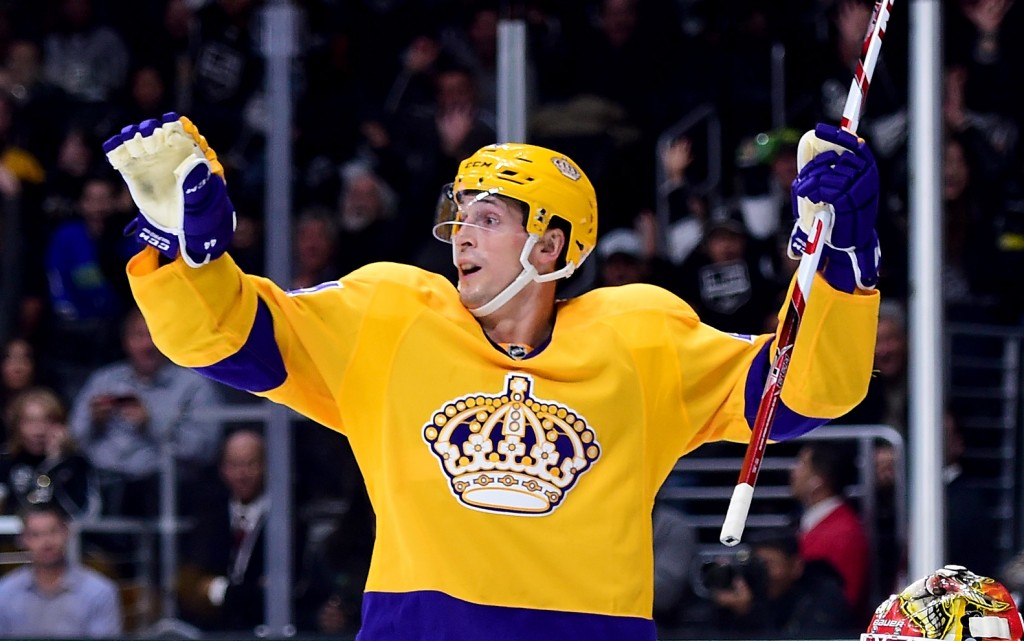 LOS ANGELES, CA – FEBRUARY 23: Vincent Lecavalier #44 of the Los Angeles Kings reacts to a goal from Luke Schenn #52 in front of Joni Ortio #37 of the Calgary Flames to take a 1-0 lead during the second period at Staples Center on February 23, 2016 in Los Angeles, California. (Photo by Harry How/Getty Images)

Bought out by the Lightning in 2013, Lecavalier was once dubbed the Michael Jordan of Hockey. Okay, that was before he even stepped on an NHL ice surface, but he had enough talent to be the centerpiece of a Stanley Cup winner and a 50-goal scorer in the league. That’s good enough for me. 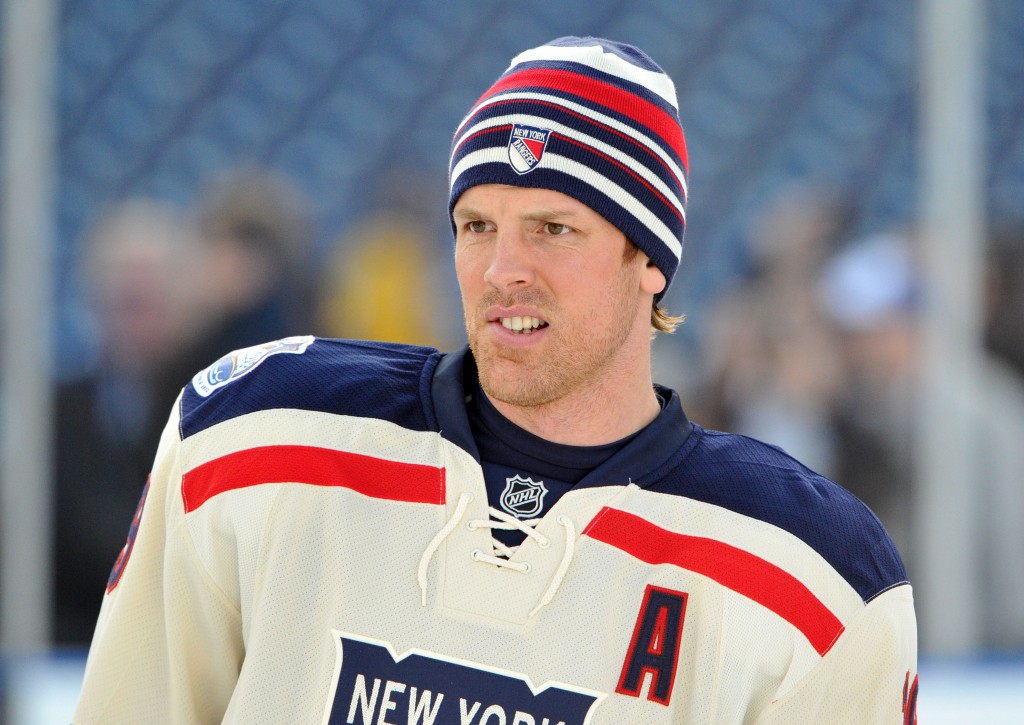 Also recently retired, Richards adds character to the locker room, two Stanley Cups, and 932 career points in 1,126 career games. As evidenced by his game-tying goal with under seven seconds left in Game 5 against the Capitals in 2012, he also possesses the clutch gene. Richards was bought out by the Rangers in 2014. 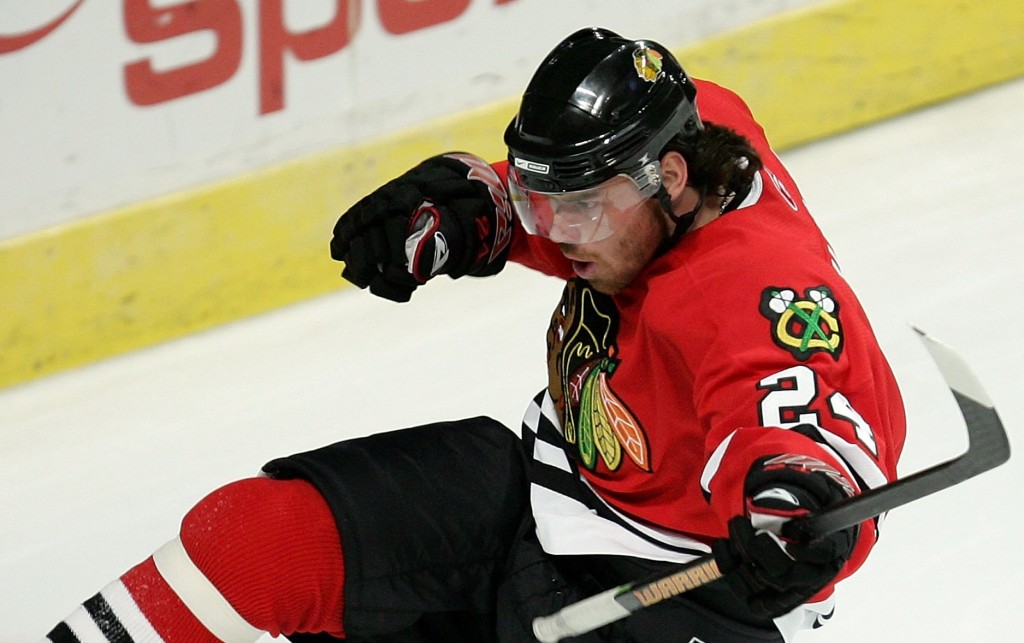 CHICAGO – OCTOBER 18: Martin Havlat #24 of the Chicago Blackhawks celebrates his first period goal against the Montreal Canadiens October 18, 2006 at the United Center in Chicago, Illinois. (Photo by Jonathan Daniel/Getty Images)

Havlat, bought out by the Sharks in San Jose, is entering his age 35 season and was a standout in Ottawa in addition to being close to a point-per-game player in Chicago. 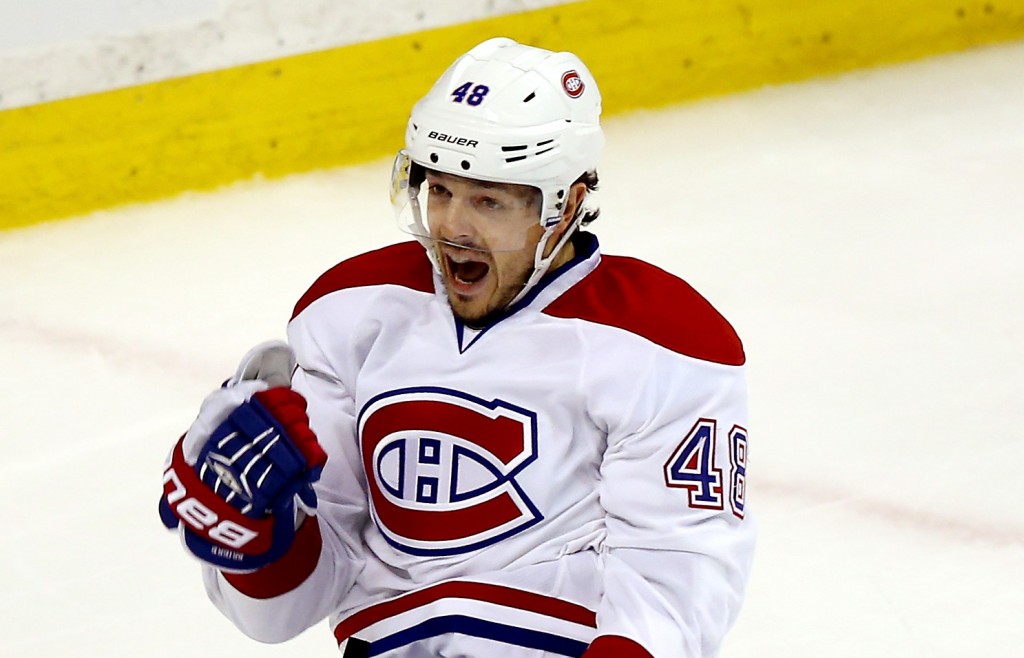 Okay, I’m cheating. There are a lot of centers who have been bought out, and I have to get them all into the top-two lines. So Briere, who was bought out by Philadelphia in 2013, had better learn to play on the flank because he deserves to be on the team. As a 300-goal scorer, his skills will translate nicely. And I can put him at his natural position on the power play because Richards will probably wind up being on the point.

It would seem silly to put together the team that Booth suggested and not have him on the team. Booth is a former 30-goal scorer who was bought out by Vancouver in 2014, and currently plays in Russia. 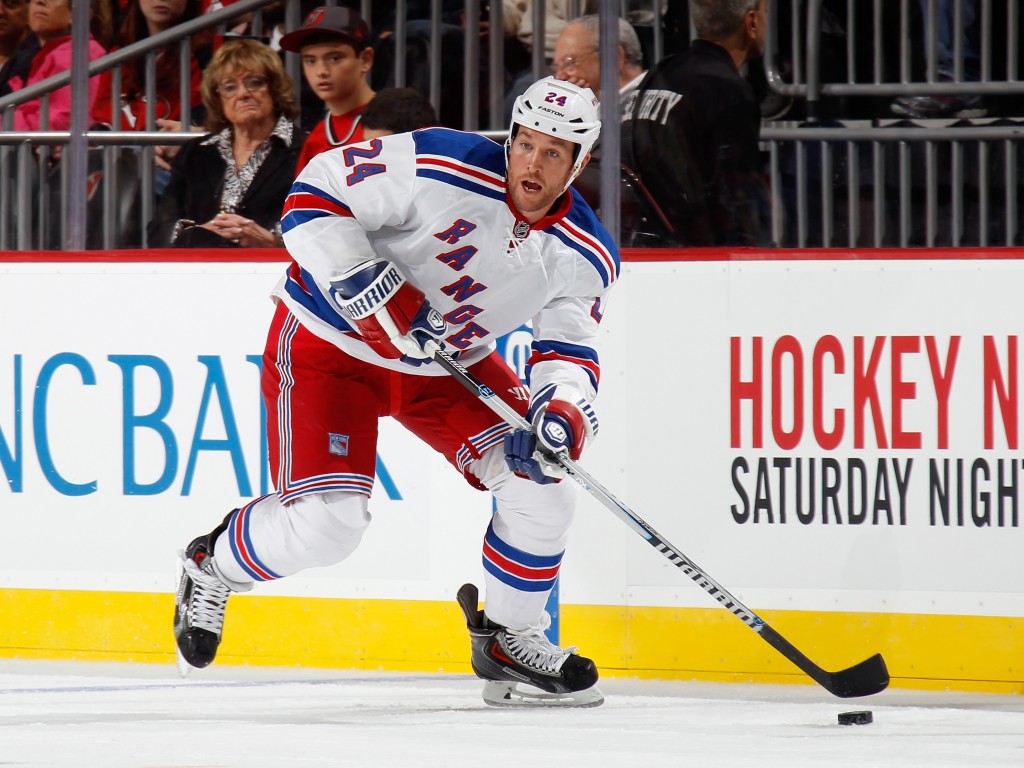 NEWARK, NJ – OCTOBER 04: Ryan Malone #24 of the New York Rangers skates against the New Jersey Devils at the Prudential Center on October 4, 2014 in Newark, New Jersey. The Devils shutout the Rangers 3-0. (Photo by Bruce Bennett/Getty Images)

If Malone, bought out by Tampa Bay in 2014, could return to his days as an effective two-way player earlier in his career, he could be a solid addition to this team. Look, it was either him or Ville Leino. And I didn’t want to drudge up a lot of bad memories in Buffalo again. They’ve had it bad enough. 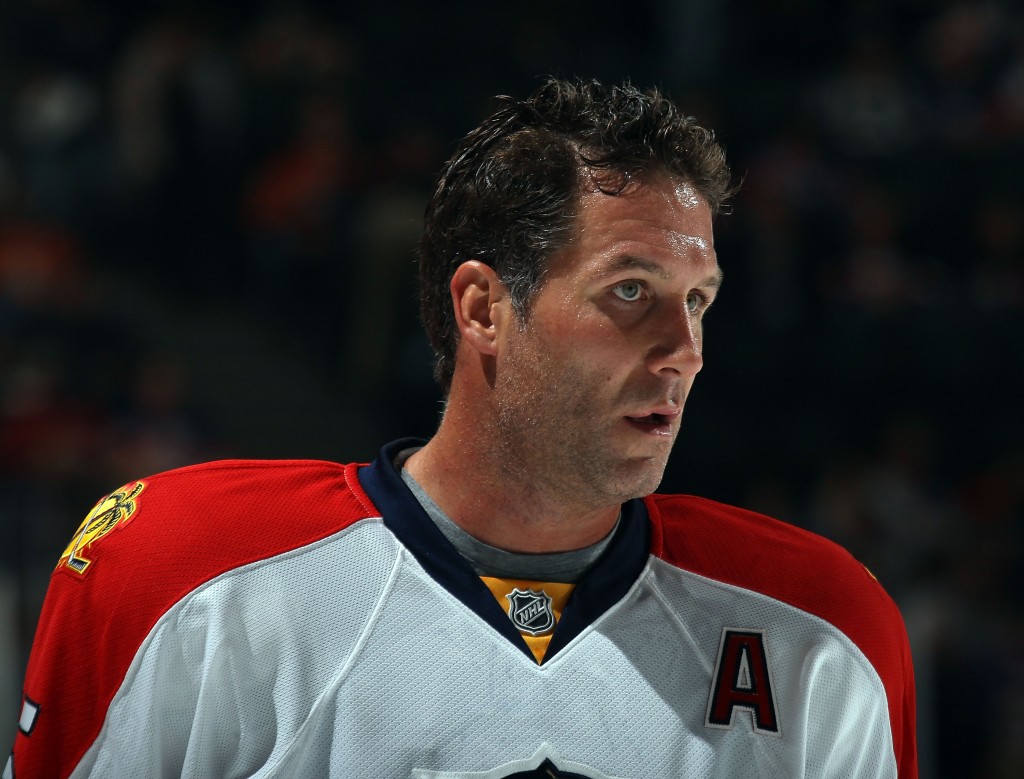 Jovo Cop, bought out by Florida in 2014, had 500 points as a defenseman in his career and would be the power play specialist this team needs. At 40 years old, Jovanovski would have to get back on the bike. And he has three weeks to get in shape. Good luck. 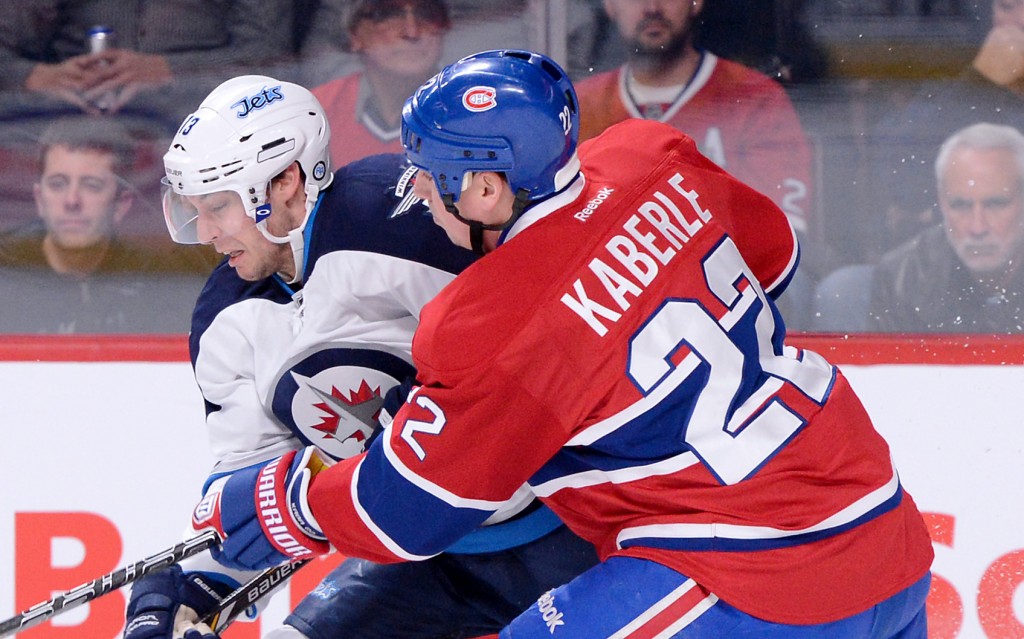 MONTREAL, CANADA – JANUARY 29: Anthony Peluso #14 of the Winnipeg Jets skates with the puck while being defended by Tomas Kaberle #22 of the Montreal Canadiens during the NHL game at the Bell Centre on January 29, 2013 in Montreal, Quebec, Canada. The Canadiens defeated the Jets 4-3. (Photo by Richard Wolowicz/Getty Images)

Tomas Kaberle was an underrated point producer in the NHL and was a solid plus player in the league before he played for some terrible teams late in his career. Kaberle, bought out by Montreal in 2013, is currently playing in the Czech Republic. 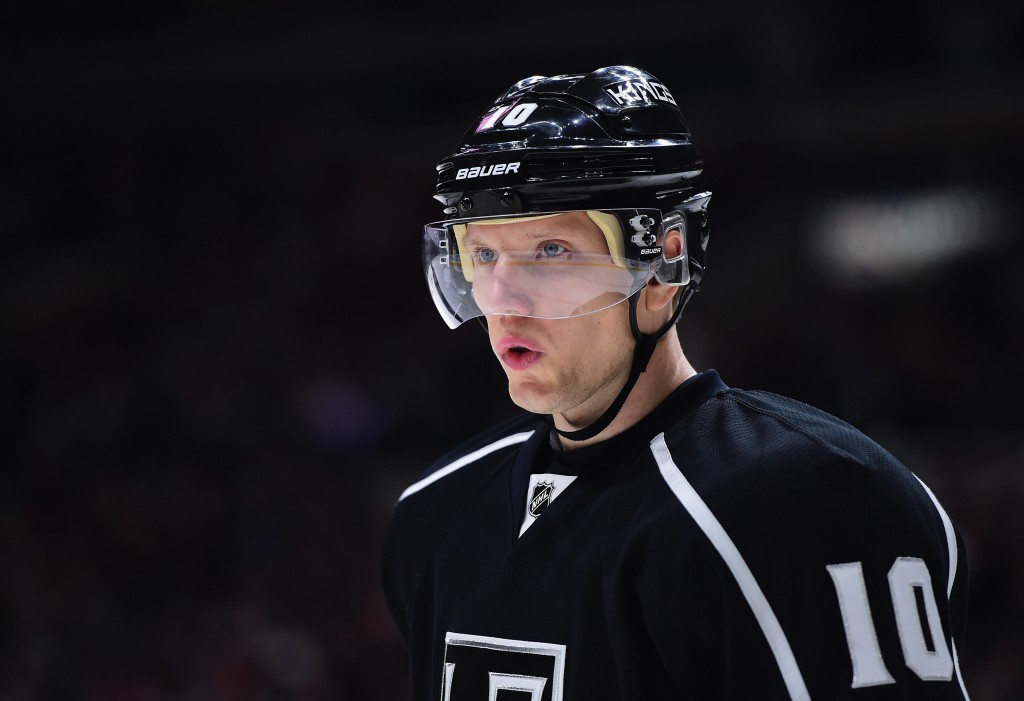 LOS ANGELES, CA – NOVEMBER 14: Christian Ehrhoff #10 of the Los Angeles Kings gets into position for a faceoff against the Edmonton Oilers at Staples Center on November 14, 2015 in Los Angeles, California. (Photo by Harry How/Getty Images)

Ehrhoff could probably still skate with anyone in the league at 34, and has always been a solid offensive producer from the blueline. Ehrhoff was bought out by Buffalo in 2014, but don’t blame him for the struggles of those sinking ships the Sabres used to trot out on a nightly basis.

Ditto for Kaberle, Komisarek was a solid defenseman whose +/- numbers took a hit on those late 00’s Toronto teams. Komisarek was a standout at Michigan and was bought out by Toronto in 2013. 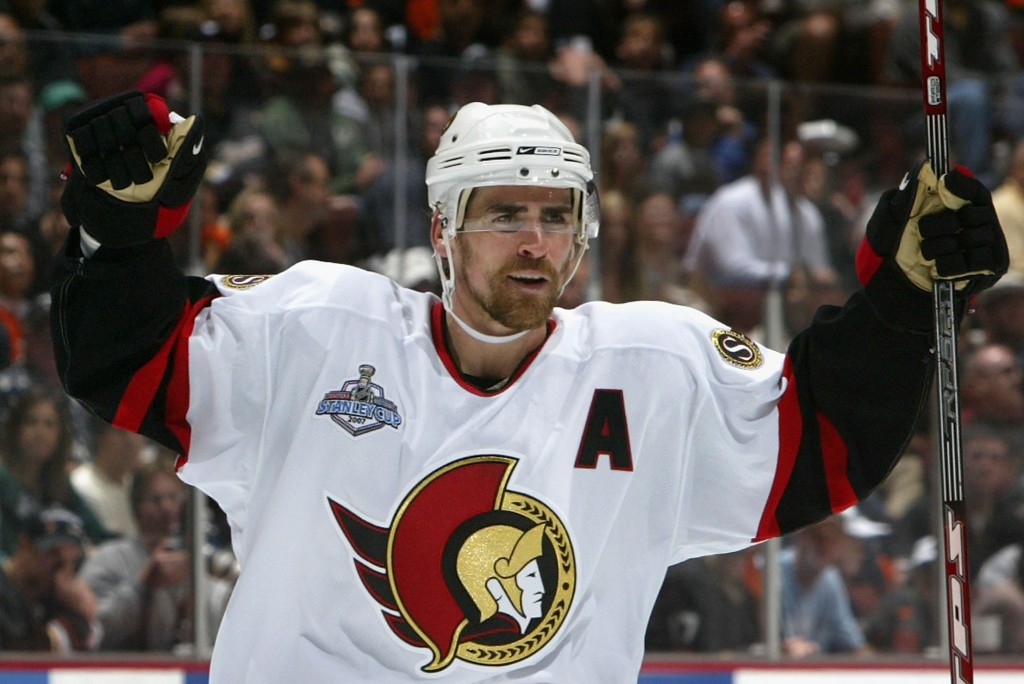 ANAHEIM, CA – MAY 28: Wade Redden #6 of the Ottawa Senators celebrates after scoring a second period power play goal against the Anaheim Ducks during Game One of the 2007 Stanley Cup finals on May 28, 2007 at Honda Center in Anaheim, California. (Photo by Dave Sandford/Getty Images)

Wade Redden got so old so fast that it’s easy to forget he’s still under 40 years old. And he was once fantastic for the Ottawa Senators. Not so much for the Rangers, who bought him out in 2013. Redden, whose huge salary was stashed in the minors for years, might have been the reason we have compliance buyouts, so let’s put him on the team. 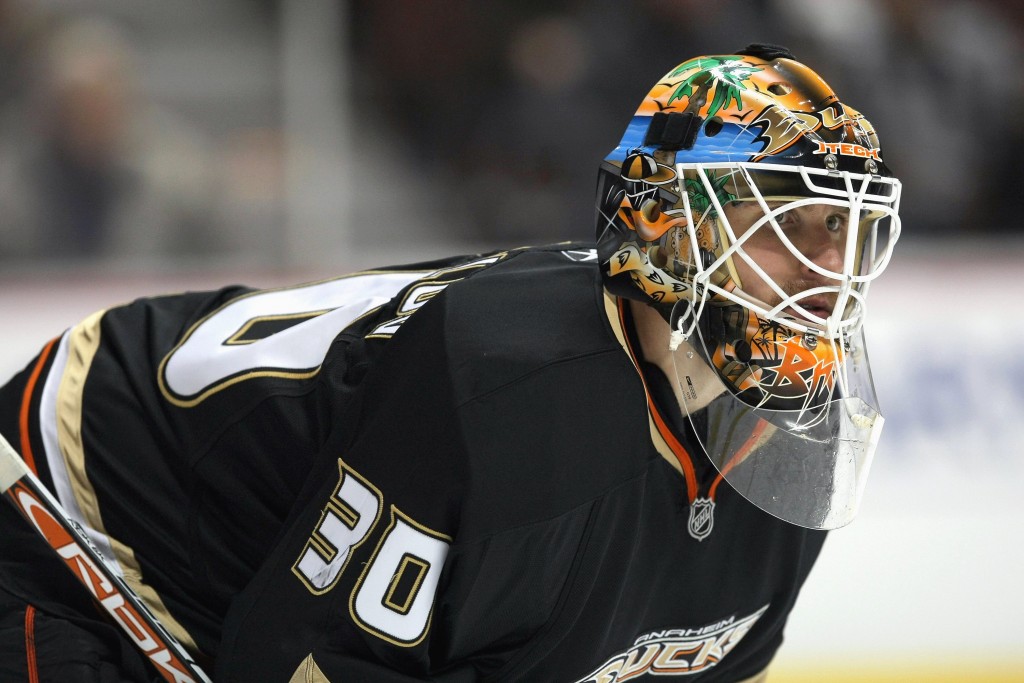 ANAHEIM, CA – NOVEMBER 07: Goaltender Ilya Bryzgalov #30 of the Anaheim Ducks looks on from his net during their NHL game against the Phoenix Coyotes at the Honda Center on November 7, 2007 in Anaheim, California. The Coyotes defeated the Ducks 6-5 in overtime. (Photo by Harry How/Getty Images)

The World Cup isn’t big enough for Humongous Big Universe Ilya Bryzgalov. Bought out by the Flyers in 2013, Bryzgalov was a pretty good goalie, winning over 200 games with a .912 save percentage and a 2.58 GAA. 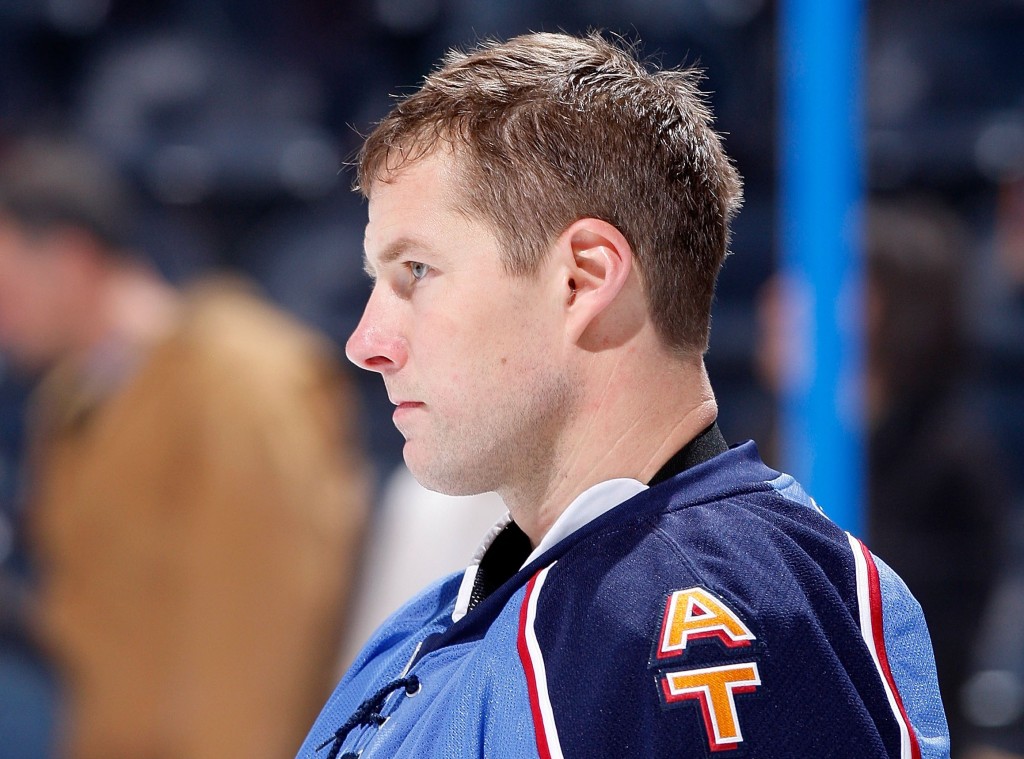 Hedberg, bought out by the Devils in 2013 is the perfect backup for two reasons. One, he has the stats and the temperament to do it, as his 161 wins and .901 save percentage combine nicely with his experience as a part time player. And two, because the only other goalie who has been bought out was Rick DiPietro (according to the NHL’s buyout tracker), and he already hurt himself before this team was even assembled.