The Toronto Maple Leafs are going to be a case study for analytics whether we want them to be or not. After bringing in multiple analytics consultants and assistant general manager Kyle Dubas, the target was placed firmly on their back. For better or for worse, you will see different writers pointing at the Maple Leafs as the reason why analytics are faulty and not worth your time of day.

They can shut everyone up if they start winning, but how quickly can they do that?

Jeff Veillette of The Leafs Nation had an article the other day talking about the possibility of the Leafs not being as bad as many are expecting. While the team undoubtedly improved this offseason, the question many are asking in Ontario is how quickly this team can get back to the promised land. The answer may be longer than people want to admit.

Rebuilds don’t come easy and generally take years to fully form. The Leafs are only a year and a half into their rebuild and it is already starting to bear some fruit. Their AHL affiliate, the Toronto Marlies, made it all the way to the Conference Finals before being ousted. They were a record-breaking club that had star prospects all throughout the lineup that are poised to be impact players in the NHL as soon as next year.

Names like William Nylander, Josh Leivo and Nikita Soshnikov are nice, but they don’t strike fear into opposing lineups just yet. Mitch Marner is smallish and a top-end scorer, but it would be unfair to assume that he can jump right into the league. He could play in the NHL but his development could be stunted if he gets rushed too quickly. The stark reality is that most prospects don’t end up panning out regardless of their rankings before they were drafted. It doesn’t matter if you have the best statistical model in the world, no one can predict the randomness of a player’s growth. Their developmental path isn’t going to be standard across the board and because of it some will rise to the occasion and others won’t.

William Nylander might be the best #Leafs prospect in the last 15 years.

For every prospect that does find success, multiple won’t and that is why the numbers game the Leafs are taking with their draft strategy is so damn fascinating. They are stockpiling picks and are drafting all sorts of players, whether they be overage players or large defensemen. It goes against traditional analytical thinking, but it could provide a baseline for them in the future when targeting certain players in the draft.

Auston Matthews is obviously the “can’t miss” prospect of the bunch and will instantly improve the Toronto Maple Leafs. It isn’t hyperbole to expect him to score 50+ points in 2016-17. All Stanley Cup winning teams have multiple cornerstone players to rely on and Matthews is the only player that sticks out as a franchise, “can’t miss” player as of this article. 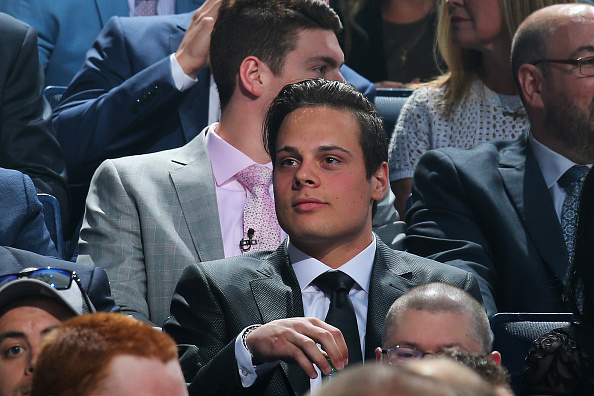 On the Maple Leafs, Jake Gardiner and Morgan Rielly are fine defensemen but are mostly tweeners, not game changing players. Nazem Kadri and James Van Riemsdyk are good players and provide value, yet they muddy the waters because of their age. Are they going to be capable players once this team can compete?

Which brings us to the question at hand, when can the Leafs compete realistically? This year will be a year for improvement but should be another year in the lottery. Next year as more prospects begin to improve you will begin to see dividends for this team. It took a year after Kane and Toews were joined together to make the playoffs and it took Crosby a year without Malkin before making the playoffs. Matthews is good, but it remains to be seen whether or not he is on the level of those types of players.

A more sensible comparison is probably an Anze Kopitar type who is defensively sound and a strong offensive player. It took three years to make the playoffs after he joined the league, but that wasn’t because he was incapable. Rather the team needed to be built across the board. Drew Doughty was part of that build as well. Similarly Matthews isn’t going to be able to do this alone. He needs more high-end prospects to join him not named Nylander.

Leafs land may soon be running out of patience, but this season should be a reminder of what is coming. A team led by a skilled number-one center in Matthews and a deft coach in Mike Babcock is not too shabby. It isn’t going to be a five-year rebuild. It is going to be more of a three-year build. Is the “6” going to be able to cope with that?