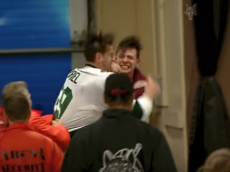 Vince Dunn of the Chicago Wolves and Kurtis Gabriel of the Iowa Wild had a pretty spirited fight in the third period of their game on Saturday night. After they exchanged punches on the ice, the two weren’t finished as they met up off the ice in the tunnel and fought a bit more. Watch Dunn […] 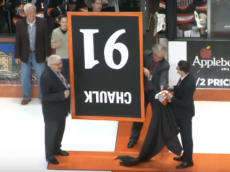 If you can’t stand watching people embarrass themselves on a grand scale in public, the video below is not for you. The Fort Wayne Komets of the ECHL held a special ceremony for Colin Chaulk as they prepared to retire his #91 and raise a commemorative banner to the rafters. There was just one big problem – […] 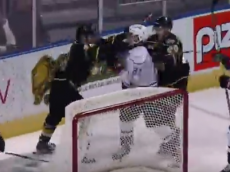 Anaheim Ducks prospect Max Jones lost his temper in a recent OHL game between the London Knights and the Owen Sound Attack and it resulted in a brutal attack on Jonah Gadjovich. Jones wasn’t too pleased that Gadjovich was still fighting for the puck in his team’s crease and it led to a slash to the back of the […] 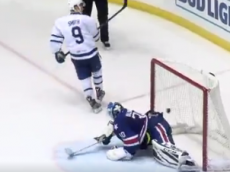 Life can be tough sometimes. Linus Ullmark, the goaltender for the Rochester Americans, had himself one heck of a game and had to find out that idiom the hard way. The Rochester Americans and Toronto Marlies played themselves a tight AHL affair. The game ended up going to the shootout. Colin Smith looked to be denied […] 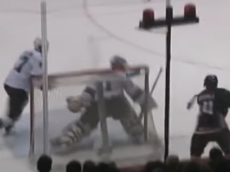 Making an immediate impact in the AHL is tough to do. You either have to be a highly rated prospect or grab a team’s attention in a completely different way. Kalle Kossila of the AHL’s San Diego Gulls may have just grabbed the Anaheim Ducks’ attention when he scored this absolutely insane goal. 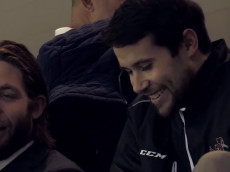 Craig Cunningham is back in Roadrunners colors nearly two months after suffering a career-ending injury which nearly killed him. Back in November, the former Roadrunners captain nearly died after collapsing on the ice pre-game. After not hearing much regarding his condition, in December his near-death experience was detailed. Cunningham had part of his leg amputated […] 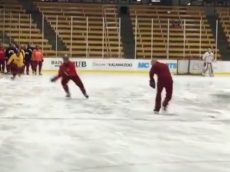 The University of Denver hockey team traveled to Kalamazoo for an upcoming game. But, there was just one little problem – their sticks didn’t make the trip with them. Without their most important piece of equipment, the team still practiced, pretending they all had their sticks as they ran through some drills. 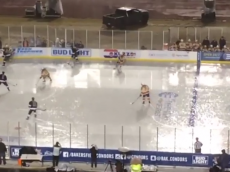 Rain was a big talking point heading into the 2017 Winter Classic with the concern being the rink would resemble more of a swimming pool than an actual playing surface. Thankfully, the rain held off, but a recent game in the AHL between the Bakersfield Condors and Ontario Reign showed fans what it’s like to play […] 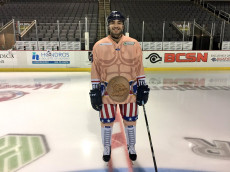 Minor League hockey is all about pushing the envelope with fun. Nothing wrong with that, right? Except when the fun hurts your eyes a little bit. This Saturday, the Toledo Walleye are going to have some fun, and it might hurt your eyes a little bit at first, as they pay homage to Rocky Balboa […] 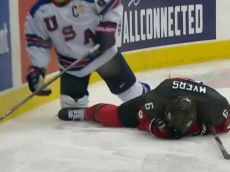 Team USA forward Luke Kunin was ejected from the U.S.’s game against Canada at the 2017 World Junior Tournament on Saturday after a late hit to Canadian defenseman Philippe Myers. 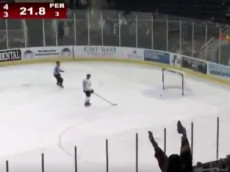 ECHL goalie Alex Nedeljkovic had a pretty huge night for the Florida Everblades on Friday night. With Nedeljkovic’s holding on to a 4-3 lead, the goalie took his opportunity to score the first goalie goal in Everblades history by firing a puck down the ice at an empty net. 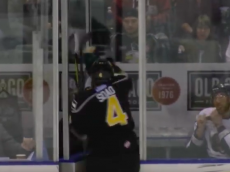 The ECHL has always been known as a funky league. One moment you’ll see a bone-crunching hit and the next you’ll see a beautiful goal. It is a tad goofy. 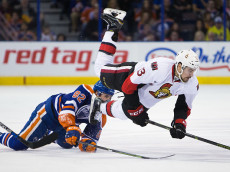 Playing in the NHL has its many benefits, but it is also one of most violent sports out there. You’ll get some nasty scrapes and cuts which is the nature of a sport where players skate around on razor-sharp blades. Nick Paul, a forward for the Binghamton Senators in the AHL, found out the dangers of the […] 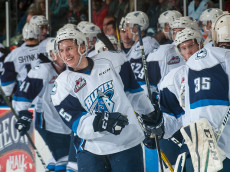 Being born during the Millenial generation means you get criticized for pretty much every little problem. The Saskatoon Blades are taking the “get off my lawn” attitude to the next level. They are taking their players’ phones before games. 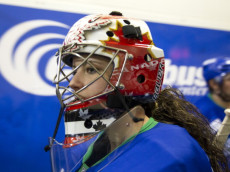 The Peoria Rivermen cleaned house on Monday, releasing Shannon Szabados just two games into the SPHL season. This comes just days after she made franchise history by being the first female to play in the organization. Szabados, a veteran of the Canadian Women’s National team, joined the pro rankings back in 2014 with the Columbus Cottonmouths, […]