This weekend offers an ESPN3stravaganza of bouts involving pound-for-pound talents Lucian Bute and Vitali Klitschko in what forecast as one-sided fights. Since the website kicked off its boxing programming in earnest, it has webcast better and more competitive fights, but it has not hosted such esteemed boxers as Bute and Klitschko.

That’s a plus. The main minus is the one-sided part.

Bute is defending his super middleweight belt in his adopted homeland of Canada against Jesse Brinkley, an honest pugilist if there ever was one and a man who has revived his career since leaving “The Contender” by sharply and entertainingly outboxing and outfighting Curtis Stevens earlier this year. On paper, he is no match for Bute’s power, speed and versatility.

Klitschko is defending his heavyweight belt against Shannon Briggs, who replicates Klitschko’s foreboding size and possesses power perhaps the equal of the big Ukranian. On paper, Klitschko is too skilled and too prepared for the oft-lazy (or, if you ask him, asthma-limited) Briggs.

Another minus is that some people don’t have access to ESPN3 because of a wacky situation between ESPN and internet service providers. It would be ideal if ESPN3 remedied this. But the bottom line is that, thanks to ESPN3, more people in America than before can see a fine talent from Canada and a fine talent from the Ukraine ply their crafts. And for those without ESPN3, you can catch the fights on ESPN’s other networks Sunday – check your listings. In a dry October for the sport, that’s better than nothing. 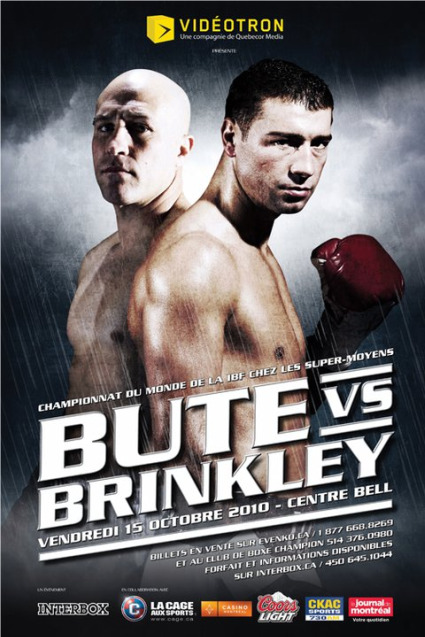 Brinkley had some entertaining remarks in this month’s Ring magazine about how he was going to fight Bute, talking about putting some “James Toney” business on him, since Bute has only faced limited, come-forward brawlers for the most part.

He might be right. One of the reasons Bute isn’t on my pound-for-pound list is that he hasn’t beaten many top-notch 168 pounders. He’s beaten Librado Andrade and a number of borderline top-10 opponents. Andrade is tough, but he isn’t the kind of talent that is on display in Showtime’s Super Six, the kind of technically more advanced and proven super middles Bute would need to defeat in order to win me over fully.

That said, he has the look of a fantastic prizefighter. He is fast, powerful, determined and tricky from his southpaw stance. As a fan of body punchers, I can’t help but adore his ribcage knockouts. I don’t think I’d pick him to beat some of the men in the Super Six, but some of the matchups would be hard to call. Part of it is that we just don’t have much knowledge of how Bute would handle the kind of skill they would bring to bear.

Brinkley proved in his last fight he can bring more skill to bear than one might imagine. It was one of the year’s most surprising performances, his battering of Stevens. Brinkley would brawl in spots, befitting his reputation, but he also exhibited some pretty good defense and management of distance.

Brinkley and underrated trainer Peter Manfredo, Sr. might have the right blueprint to beat Bute, but I don’t think Brinkley has the right gifts. A version of Brinkley even more improved than the version we saw against Stevens will be slower, less technical, less powerful. I don’t think he has the one-punch power to test whether Bute’s last-second collapse in the first Andrade fight was indicative of a bad chin or merely exhaustion.

Brinkley might give Bute some resistance early, but he probably won’t last too long, despite evidently having a good chin himself. He might last the distance, but then, nobody Brinkley has fought is within several light years of Bute’s ability. With Bute knocking his last three opponents out by the 4th round, I’ll add an extra two rounds worth of toughness to Brinkley’s survival rate before Bute turns off the light in the 6th.

P.S. I can’t knock Bute for taking this fight too much. It’s either that or lose his belt, and the Super Six has stolen away potentially more formidable opponents. But beating Brinkley would prove nothing about Bute. It’s why Bute is flirting with a move to light heavyweight, where boxers with no tournament obligations reside. I’d rather see Bute-Jean Pascal or Bute-Tavoris Cloud or whatever than more fights featuring Bute take on the best of whatever’s left outside the Super Six at 168.

When the baddest blood between two heavyweights is a namecalling fight over whether one heavyweight uses his asthma as an excuse for losing or whether the other is an anti-asthma bigot, you know their fight will need a drama boost in the ring.

It’s unclear if Briggs can provide it. For a few rounds, he figures to be dangerous, at least in theory. Thirty of Briggs’ 45 knockouts are in the 1st round by my count, and another 11 came before the midway point of the fight’s alloted rounds. His only noteworthy late-round knockout was in what had been a low contact affair to that point with Siarhei Liakhovich, when he ended a prolonged stretch of merely standing still to deck Liakhovich all the way out of the ring in the 12th.

But it’s not as if Klitschko has ever shown any weakness in his chin. I can’t think of a single moment, in fact. None. He’s never even been stunned that I know of, and he’s been hit by the heavy-hitting likes of Lennox Lewis, Samuel Peter and Cristobal Arreola. This is the moment where a theoretically dangerous Briggs becomes less so.

This is that moment for Briggs, at least in this fight preview. If the 39-year-old Klitschko has become badly faded – and he didn’t look quite as dominant in his last fight against journeyman Albert Sosnowski, by most accounts – then Briggs, with his equal reach (80 inches) and power could theoretically get some kind of long-shot hope.

But unlike for an adventure flick protagonist who has enough guile and daring to try something foolish, that long-shot hope against Klitschko is out of Briggs’ control. It’s all up to whether Klitschko is well on his way down athletically. Mainly, he’s a guy notorious for exhibiting flashes of power and that’s all. Klitschko has his own power – 38 knockouts in 40 wins – and Briggs has been knocked out before, and has lost to far worse fighters than Klitschko, and he’s 38 his damn self. To me, the main question is whether Briggs survives to the final bell. I say he doesn’t. If he was more mobile, maybe. Instead, I expect a prototypical Klitschkoian chopping-down job, with somebody stopping the fight in the 10th.

P.S. I don’t much blame Klitschko for taking this fight, either. David Haye, Nicolay Valuev, etc. weren’t much interested in fighting him, and the Klitschkos have stayed commendably busy over the last couple years, so if he wants to keep doing that, he’s got to fight the next willing opponent. Briggs was that man.

Other fights this weekend worth noting, not for predictions’ sake: