It’s a simple formula. Two fighters face off over a table. They sit backwards on aluminum chairs and perform a strange good cop/bad cop parody routine. Both try to be the bad cop. It’s HBO’s Max Kellerman, also astraddle his seat, who’s the good cop. Or at least the goofy cop.

When the recipe works, it can be better than the actual fight. You can see the fighters’ hairs standing on end. You can also see Max’s hair standing on end, but that’s probably just Brylcreem. Thanks to Julio Cesar Chavez, Jr.’s crazed stare and anti-bullying campaigner Sergio Martinez’s relentless bullying, the most recent addition was one of the best yet. 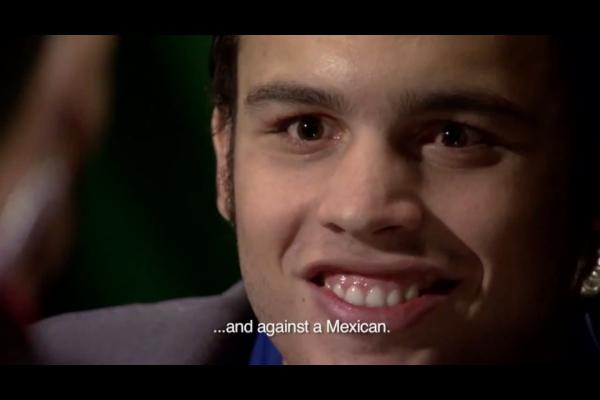 (Those are some loco eyes)

When it doesn’t work, it’s like a 12 minute long, televised limp handshake. Some guys just aren’t confrontational, and that’s why Face Off segments with Shane Mosley, Manny Pacquiao and Juan Manuel Marquez have kind of sucked.

All the same observations apply to Showtime’s “Staredown” segment, which was pretty clearly “inspired by” Face Off. And by “inspired by” I mean “straight out ripped off.” Except that Jim Gray impersonates Max Kellerman. Kind of a scary thought.

But some kind of terrifying Max Kellerman/Jim Gray hybrid is not our concern (yet, people!). Instead, let’s focus on the Face Off segments we’d like to see. TQBR chooses to be unencumbered in our imaginings. We’re not going to let things like promotional disputes, trainer switches, different weight classes, the HBO budget and/or common sense get in our way. Spread your wings and dare to dream with us.

Leaving aside the fact that a fight between these two would no doubt be an entertaining heavyweight brawl, imagine how spectacular their Face Off would be. Arreola is an endearing, profane Mexican-American who doesn’t take any shit, while Chisora might actually be insane. Extra points if Chisora can bring his dog.

Kansas City’s Rios and Ortiz hate each other. Rios is kind of hilarious, in an abrasive, 7-year-old with attention deficit disorder at a barbecue kind of way. I’d describe Ortiz, but even Ortiz doesn’t know what he is. I don’t think even the googly eyed quitter turned banger turned nice guy turned fouler turned surfer dude has any idea what he’s going to do from moment to moment and that makes for great TV.

Paulie Malignaggi, lovable guido and the man with the most sculpted eyebrows in boxing, is an obvious choice for Face Off. He may well be the best trash talker in the sport. Aydin, meanwhile, has some trash talking chops of his own. While “Mini-Tyson” probably isn’t quite up to the “eat your children” level, he gave Robert Guerrero a lot of heat before their fight in July. Unfortunately I’m not sure if this Face Off would be technically possible; a Turkish translator might not be able to keep up with Malignaggi’s mouth.

I know that junior middleweight James Kirkland is embroiled in an ugly dispute with former trainer Ann Wolfe and manager Cameron Dunkin. But I choose to live in Fantasy Land, damn it! The Matador, for his part, is legendary for talking trash. His Twitter account, reportedly managed by his brother in law but very possibly fake, is full of bilingual gems like: “Canela is fight el criminal Kirkland. His trainer man wolf has more balls than him. She is give Canela better fight so we see 2 Chicas fight.” Also, I just want to see more of Kirkland and Wolfe. Well, mainly Wolfe, since Kirkland comes from the Paul Williams school of enunciation. She’s the baddest bitch on the planet and the one coming up with quotes like “We want something raw, with its eyeballs looking at us, so we can kill it and eat it.” 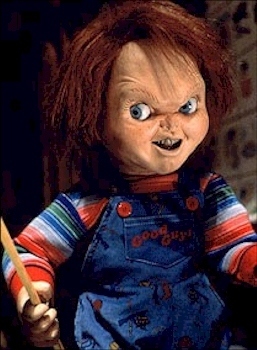 (Artist’s impression. And you thought JCC Jr.’s stare was crazy)

The build-up to this fight would be crazy. Mexico might actually explode. Despite their different backgrounds, both these young men exude a sense of privilege, of entitlement. The collision of egos alone would make for amazing TV. When you add a dash of Canelo’s horror-movie spookiness and pinch of Chavez’s wide-eyed madness, you may have something truly special.

This one’s on the list for one reason: Broner. Mr “Brush My Hair” is almost better practiced at his faux Floyd Mayweather schtick than he is at his flashy boxing. I can already see Broner butchering the name of Bogere’s African home: U-Can-Getit-Da. Bogere likes to enter the ring dressed as a caged lion, so he brings some personality too. Extra points if he actually wears the lion suit to the Face Off