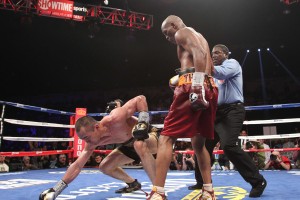 The peerless Bernard Hopkins, still fighting at age 49, looked to unify two of the light heavyweight belts as he faced Beibut Shumenov of Kazakstan. He did just that, embarrassing his overmatched opponent on the way to an inexplicable split decision.

The 1st round slipped away with little action, both men sizing each other up. When they tangled inside Hopkins scored a typical chopping right hand. Nothing else much registered for either man.

In round 2 the pace edged up a bit, with Shumenov pecking away looking for openings. Hopkins landed a patented lead right and then his signature right hook to the hip combo. The restless crowd was looking for more from both.

In round 3 Hopkins landed a looping right hand that connected flush. He peppered Shumenov with sneaky off kilter jabs and ended the round with a short uppercut that drew gasps from the crowd as it connected to Shumenovs chin.

The right hand was dialed in all the way in round 4, as the old man lambasted his opponent time and again with it. Shumenov’s right eye began to swell from the repeated battering and Hopkins took the opportunity to showboat, mugging in the corner before swinging hard for further damage.

Flat-footed and staring, Shumenov ate home run shots from Hopkins in round 5. Busting him in the face at will, Hopkins seemed calm as only an absurdly experienced prizefighter like he could. Hopkins, suddenly on his toes at the midway point, was floating on air, launching sweeping left hooks, straight right hands, all with precision accuracy. It was showy. It was poetic. It was vicious.

The 49-year-old continued to throw his punches with commitment painting Shumenov’s face throughout rounds 7, 8 and 9. At times backing up and waiting to counter solidly, other times bouncing on his toes before hurling another right hand. As the two belt holders entered the championship rounds, it was clear who the real champ was on this night.

In the 11th round Hopkins landed a crushing straight right hand that collapsed Shumenov to the canvas. Sensing the chance to witness a knockout, chants of “B-Hop” thundered through the Washington, D.C. Armory. The Philly fighter landed a few more telling blows, but could not press his advantage fully.

In the final round Hopkins did his best to close the show, standing Shumenov up straight with his seemingly unstoppable lead right hand. A leaping left hook sent the crowd into a frenzy, with further chanting for the ageless legend erupting spontaneously again.

In the end, while the knockout did not come, there was little doubt who the victor was — until the scorecards were read and announcer Jimmy Lennon, Jr. informed all the spectators that the bout’s verdict was a split decision. The judges brought down scoring of 116-111 for Hopkins twice and one incomprehensibly scored 114-113 for Shumenov.

Hopkins unites two titles and now looks to further cement his status in the division by chasing Adonis Stevenson the lineal champion in the division.