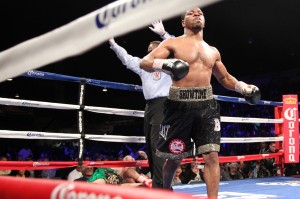 WASHINGTON, D.C. — A feisty and energetic 1st round saw Paulie Malignaggi bleeding early and vaseline slung from Shawn Porter’s face. A little wild and frenetic, both men opened up early and found success in an entertaining bout.

In round 2 the two welterweights fought on even terms, but the latter’s punches were doing more damage. In the final third of the round Malignaggi was stunned by a series of booming shots that sent the Brooklyn star to the ropes valiantly fighting back, but looking the worse for wear.

Round 3 saw a further battering, with Malignaggi’s lack of power keeping him from mounting anything to keep Porter at bay.

The end came in a dynamic and brutal knockout in the 4th round as, pinned on the ropes, Malignaggi was defenseless and crumpled down to the floor as the referee stepped in to end the bout. His cornermen and the referee tried to keep Malignaggi down on the mat, however the always gritty “Magic Man” stumbled to his feet to show everyone that he was okay.

An emotional Malignaggi stood on the ring apron in front of his large contingent of vocal ringside fans who cheered him even in defeat. He spoke of possible retirement in a classy ring interview, praising the victor.

Porter, looking like a rising star, ended the fight in conclusive fashion, running his record to 24-0-1. His swarming, energetic style surely won him fans and further big fights in the near future.

With nearly twice the number of bouts, Lukas Konecny stepped in against the bigger, stronger, middleweight WBO beltholder Peter “Kid Chocolate” Quillin (31-0, 22 KO). The challenger spent much of the 1st round coming forward, pressuring, but not throwing punches while Quillin pecked away with jabs and the occasional hook. A tight defense seemed to stymie the beltholder’s offense, though Konecny landed only sporadic blows of his own, wading forward throwing single punches.

In round 3 both men had started to un-tighten a bit and each had their moments but, expecting more from Qullin, the pace seemed slow and listless. With a subtle shift, round 4 saw Quillin starting to launch more sweeping right hooks, looping around the guard of Konecny. A break for tying shoe laces stood out as the most notable action in round 6 until a fight broke out to finish off the stanza, Konecny looking wobbly and off balance as the bell rang. The crowd sat politely and quietly as the fight settled into its typical pattern of one shot at a time for the next few rounds following this brief respite from tedium.

As blood started to smear Konecny’s face in round 8 Quillin began to lay down a series of uppercuts and hooks, spurred on by the crimson. Though even that promise of further dynamic violence dissipated over the next round and a half; midway through the 10th the crowd was booing the fight.

The tough and very game Konecny, his right eye closing and his nose seeping blood, showed grit stalking after Quillin for twelve rounds, and for his part “Kid Chocolate” could have made the victory sweeter with a little more fire in his performance, but in any event he scored the unanimous decision with scores of 120-108 and 119-109 twice. Quillin improves to 31-0 and looks to face fellow Golden Boy stablemate Danny Jacobs, another promising middleweight, in the near future.

Welterweight David Grayton ran his record to 7-0 with a comprehensive shellacking of Howard Reece (2-4), who was down early in round 1. Reece was on unsteady feet for the entire fight, connecting with one wild right hand before Grayton seemed to have him out on his feet at 1:58 of the 1st round, pummeling him in the corner as the referee jumped in to save him from further unprotected punishment.

Despite disparate records, junior welterweights Zachary Ochoa (6-0) and Hector Marengo (6-7-4) fought on relatively even terms for much of the first half of their fight, until Ochoa seemed to open up in the 3rd round with a bevy of eye-catching, sweat-spraying punches. While none of them shook up his opponent, it marked the turning point in the fight.

The two of them came out in the 4th round determined to end it, but it was Ochoa who landed an overhand right and sent Marengo to the canvas. Though he survived the remainder of the round, the Puerto Rican continued to take big punches throughout. In round 5 Ochoa unleashed an onslaught that sent Marengo down in the corner. Assuring his trainer he was alright, the hapless journeyman bravely returned to his feet and absorbed more punishment in a torrent of impressive combinations from Ochoa. The wise cornermen in Marengo’s camp hopped to the ring apron and threw in the towel at 1:32 of round 5 to the consternation of their brave charge. Ochoa moves to 7-0 and remains an up-and-comer to watch.

The 18-0 Sadam Ali “The World Kid” came in promising the world and delivered it midway through the 1st round with a dynamic right/left hook combo that twisted seasoned Michael Clark down into the ropes and unable to recover in time to continue the fight. Until that moment Clark had looked quick and sharp, portending a solid fight in which he would be a good trial horse for the undefeated Brooklyn welterweight. Instead, the TKO came quickly and impressively, ratcheting up Ali’s record to 19-0.

Light heavyweight Marcus Browne entered the ring at 9-0 and looked to prove early that he was a prospect to watch. His fast hands overwhelmed well-traveled Otis Griffin (24-16-2, 10 KO) and showed his class, manhandling the older man while ripping well placed body shots. By round 3, however, Griffin had at least settled in and managed to land enough on the undefeated fighter to work himself into respectability. As the rounds wore on Griffin started to come forward; however, that aggression suddenly turned sour in the 5th round as Browne landed a lead left that sent Griffin down to the mat. Beating the count as the round ended, the 6th and 7th rounds passed with Griffin seemingly unfazed. As the final bell tolled after round 8, Griffin and Browne hugged, acknowledging the effort from each other in what would wind up being Browne’s 10th win, a decision victory that gave him good rounds and solid experience.
***
Undefeated super middleweight D’Mitrius Ballard fighting in his hometown of Washington, D.C., impressed with authoritative straight right hands to open the fight. Working in looping hooks he started to make an impression on Quincy Miner (3-5) as the 1st round unfurled. Sensing he was overmatched, the unheralded Miner started the 2nd round complaining of phantom rabbit punches. With little success likely, he resorted to roughhousing and sent the two men to the canvas in a tangle. Though it bought the overmatched Miner a brief moment of respite, the tumble seemed to energize Ballard, who proceeded to rock his chippy opponent against the ropes, with little in his arsenal failing to make Miner look skittish. In the final barrage, Miner dipped, sitting on the rope an instant before crumpling to the mat more overwhelmed then hurt. He tried to claim a foul sent him down and refused to get up. The referee would hear none of it and ended the bout at 2:35 of the 2nd round via TKO. Ballard improves to 5-0.
ShareTweet