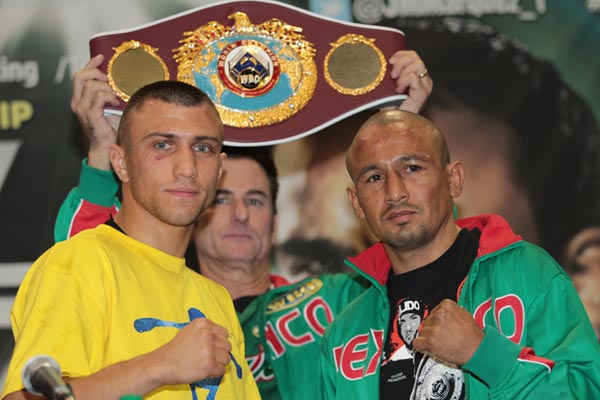 If boxing in 2014 is yet to herald anything, perhaps it’s an enhanced appreciation of the greatness of the preceding year. The paucity of this month’s schedule, when allied to the underwhelming bouts scattered with a listless promotional hand throughout January, has produced a scenario in which the sport’s primary talking point has become the lack of a finalised opponent for Floyd Mayweather. Will it be the overmatched slugger, or the undeserving speedster? No one seems quite sure, even the Money Man himself. And as if this non-news wasn’t enough, we’ve had the scintillating announcement that Sergio Martinez will be defending his lineal middleweight title against someone other than Gennady Golovkin, while Julio Cesar Chavez, Jr. will endeavor to actually train properly this time and do what he should have done first time around: namely outclass divisional gatekeeper Brian Vera in a fight that epitomises that old adage about mountains and molehills, and could potentially turn very ugly for the Texan.

Amidst all this, slipping inexcusably under the radars of many, comes a match-up of history-making potential, one which will see two comparatively pint-sized operators send monumental ripples throughout the sport. It is a fight virtually without precedent in all of boxing’s glittering history, pitting the figure with arguably the greatest amateur record of all time against a legitimate titleholder in only his second professional fight.

When Vasyl Lomachenko (1-0, 1 KO) landed the second of two seismic shots to the solar plexus of Jose Ramirez in the 4th round of their meeting in October last year, the tough Mexican contender rolled across the ring mat as if he’d been fired from a cannon. Suddenly, Jim Lampley’s description barely a quarter of an hour earlier did not seem quite so grandiose. HBO’s finest had hailed the Ukrainian two-time Olympic gold medalist as entering the pro ranks with “as big a reputation as we’ve seen for any amateur since Roy Jones.” Lampley was sat next to Jones when he said that, of course, but the comparison is valid, at least in terms of the preludes to their respective professional careers. Lest we forget that, for all his greatness, Jones would begin his journey as a professional by avoiding, in the words of the venerable Springs Toledo, “anyone who wasn’t a has-been [or] a never-was.” Thankfully, Lomachenko is choosing the path significantly less travelled.

Boasting an amateur record of 396 victories to only one defeat (twice avenged, in case you were wondering), the fighting pride of Odessa clearly feels no need to take things slow, to softly tip-toe towards the weakest titleholder in the regrettably sheepish manner of so many others. In fact, his promoter Bob Arum has spoken on several occasions of Lomachenko’s demand for a title shot in his pro debut. This was impossible, the Top Rank boss has since conceded, but they’ve managed to secure the next best thing. Taking on rugged veteran Orlando Salido (40-12-2, 28 KOs) is a tall order under any circumstances for all but the best featherweights. The fact that Lomachenko is doing so only four rounds into his professional career is nothing less than extraordinary. In the words of Arum, “nobody knows whether he can go the distance,” let alone last the full 12 rounds when faced with a relentless mauler proven over the last decade to be firmly ensconced at world level.

Despite the buzz, notable strategic differences in the way amateur and professional bouts are fought will forever ensure the problematic nature of prophesying crossover potential, even if the early signs for Lomachenko are extremely good. Olympic stars have been rushed in the past, with dejected figures such as David Reid just a few short years after his triumphant return from the 1996 Atlanta games, or Andrew Maynard, Jones’s teammate from the Seoul squad in 1988, seeing their careers curtailed by too much, too soon. What’s more, if we go back some 56 years to an incredible turn of events often overlooked by the boxing world, we learn that Lomachenko’s feat has in fact been bettered, and by a heavyweight of all people.

Even in those halcyon days before alphabet belts, when the best truly did fight the best, Pete Rademacher, fresh off a gold medal winning effort in the 1956 Olympics, was somehow managed to lure heavyweight champion Floyd Paterson into a bout to mark his professional debut in August, 1957. From Paterson’s perspective, it is easy to see why. The fight was simply too good to turn down, with a handsome payday ensured by the pre fight publicity generated both through Rademacher’s iconoclasm and the controversial matchmaking itself, which resulted in only Washington stepping forward as a state willing to sanction the fight. In the champion’s eyes, it was too good to be true. He was getting a colossal six figure purse to fight someone who was to all intents and purposes still an amateur.

More unbelievably, Rademacher even managed to win the 1st round and score a knockdown in the 2nd. But then Paterson took over in about as comprehensive a manner as is possible, flooring the challenger seven times en route to a TKO victory in the final seconds of the 6th. Rademacher would go on to beat a few handy contenders, including George Chuvalo in 1960, but he would never secure the title. Ultimately retiring with a record of 15-7-1, he claims he’d never have fought again had he emerged victorious that night. Lomachenko, at just 25, is not expected to follow suit.

We needed only a handful of minutes against Ramirez to see that the Ukrainian’s footwork is outstanding, especially the way he manipulates his lead foot, which has a twitchily hardwired ability to appear perpetually on the outside, giving him the optimum angle from which to punch. Although not quite possessing the balletic agility of this generation’s other amateur standout, Cuba’s Guillermo Rigondeaux, who himself took a “leisurely” nine professional contests to win his first title, there is no doubt that Lomachenko will prove nimbler than the comparatively leaden-footed Salido. Alongside this, his power speaks for itself. Despite not being especially busy with his punches, his supreme technique ensures he doesn’t require significant activity to get off and can counter with the best of them. Not only did he crumple the feisty, game Ramirez with single bodyshots in both the 1st and 4th rounds, but even the most cursory of YouTube searches turns up littered with scenes of sparring partners deposited on their backs.

Still, for all his talent, he would be a fool to take his opponent lightly. Salido is, after all, the quintessential professional fighter. Entering the trade at 15, he accrued eight losses over his first six years in the sport, facing far bigger, stronger men in a phase that very much amounted to learning on the job. Since then, he’s more than found his feet, to the extent that if Vic Darchinyan can be said to hold the eternal mantle of “Raging Bull” in and around the flyweight neighbourhood, Salido makes a decent case for owning the tag a couple of divisions north. As Mikey Garcia will doubtless attest, “Siri” bores into his opponents with a relentless come-forward aggression, taking whatever punishment necessary in order to get inside and open up. He’s there to be found, and put down when faced by truly elite competition, but he’s also very tough to stop.

While there’s no denying that the Mexican warhorse has been outclassed at times — most notably by Juan Manuel Marquez on the occasion of his first world title challenge way back in 2004, and more recently when defending his title against the aforementioned Garcia in January of last year — his record has always been deceptive. Victory over Orlando Cruz in October offered proof that he still has more than enough for the pretenders at featherweight, whilst his career-defining twin triumphs over then-126 pound star Juanma Lopez, in the Puerto Rican champion’s backyard no less, offer brutal testament to the destruction he can wreak when given the chance. Essentially, in the eyes of onlookers, this fight is set either to take Lomachenko into previously uncharted waters (ie – past the 5th round), or elevate his stock still further as the first man to stop Salido in almost 14 years.

Yet there is a third possible outcome. Put simply, should Lomachenko be found on March 1 not to have it, he will be exposed in maniacally pugnacious style. If the Ukrainian is “hi-tech,” possessing an advanced array of offensive tools with which to dismantle the figure in the opposing corner, then Salido is a throwback to the Gilded Age, a rust-bitten freight train of a fighter, endlessly rolling forward with a wheezing, ironclad fervour. Although tending to start relatively slowly, he picks up the pace as the miles tick by with a series of leaden shunts, until ultimately coming to resemble a perpetually charging ram, the bastard lovechild of a sledgehammer and a set of mud-caked bullbars. To say he’s a throwback when set against the gilded Olympic rings of his opponent would be an understatement, especially given the fact that he didn’t even box full-time until the payday offered by a meeting with Marquez enabled him to quit his day job as a laborer.

In boxing, as they say, styles make fights. In this case, they may just make history too.