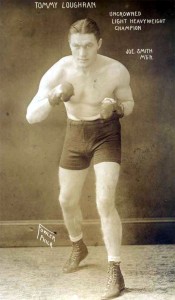 Many of the greatest fighters in history had some sort of rival or antithesis that helped define their careers. Obvious examples would be Muhammad Ali having his Joe Frazier, or Tony Zale his Rocky Graziano. The list goes on.

Why, though, are there pairs of men who faced each other numerous times without any sort of higher meaning being assigned to their interactions?

That said, if one was unlucky enough to have to measure guts against Harry Greb in a ring multiple times, there was a good chance he would only manage one win. Tommy Gibbons, Battling Levinsky, Billy Miske, Soldier Bartfield, Gene Tunney and more had, at a minimum, a terrible time simply sticking around in the same ring as Greb. Getting a legitimate win over the man was rare enough that it could be a cause for celebration.

Loughran’s only official win against Greb in six total bouts happened on October 11, 1923. Call it a personal holiday of sorts.

Loughran had gone 12-6-2 in his last 20 bouts — a record that would seem to be unlucky or just plain bad, if you weren’t to consider that he’d faced Mike McTigue, Gene Tunney, Lou Bogash, Jimmy Delaney and Greb himself — three times — in those 20 outings. But scrap them all he did, having not been stopped since three years prior, when an injury forced him to bow out in 1920 with a rib injury against Johnny Viggi only 11 fights into his career.

At worst, Loughran was fighting nearly even with all-time great type of battlers like Greb and Tunney, and he was doing it with less experience inside of a ring.

Harry Greb was a veteran of over 220 professional bouts, though as was often the case in such coal-burning and loose times, he likely fought many more, both off the record books and on the streets. Perhaps one of more folkloric of Greb’s street lamp benders was… whatever it was that happened against Mickey Walker after their legendary bout, as nobody’s drunken account was truly believable. All that is known is that they ran into each other and a watering hole or two, and eventually there was some type of violent physical contact on the sidewalk before being broken up by police.

The point is simply that Greb was a construction zone. He was an iron-plated bed of nails that could pierce the defense of nearly any fighter he came into contact with. Not only did he compile a completely absurd record by the time he unexpectedly passed away in 1926, but he did it having fought perhaps only two-thirds, or less, of the amount of time as the more elite or absolute top echelon fighters do today.

Greb’s manager Jimmy Mason wrote to several publications that his fight came out of the his previous bout against Jimmy Darcy “without a scratch.” But fictitious writer Bob Dunbar, a pseudonym used primarily by the Boston Herald, commented that though Greb got through the fight, if he went up much in weight against Loughran, he would likely be in danger of losing his middleweight title, as the weight didn’t melt off easily anymore, and Greb didn’t live the cleanest of lifestyles.

The Faneuil Athletic Club in the Mechanics Building in Boston hosted the fight. There was particular local interest in the pairing, as Greb had fought before in “The Hub,” just not since taking the middleweight title from Bostonian Johnny Wilson. How exactly Greb would be received by the city was an interesting question, to some.

W. A. Hamilton of the Boston Herald wrote before the fight that “Loughran is one of the few men in the country who makes trouble for Greb. The Quaker has practically eliminated all other candidates for the chance to win Greb’s newly won crown and believes he will topple the title holder from his pedestal in their clash.”

Loughran would later call the gym that he trained in a “dump,” and he had no actual time-telling device to fashion his three-minute rounds after. Instead, he relied on Victor Talking Machine Co. phonographs, whose records ran exactly two minutes, 50 seconds. Loughran would shadow box or hit his paltry training bags for the length of a record, plus an extra 10 seconds or so.

Greb trained hard, preferring to swim in addition to his normal gym work. But in comparison to Loughran, you might have been more likely to find Greb racing a drinking buddy to the bottom of a whiskey glass on a given night.

The Boston Herald’s Hamilton’s account read, “The fight resulted in a roughhouse affair, Greb being the chief offender throughout. The [middleweight] titleholder’s tactics met with universal disapproval from the start but he disregarded the hoots and booing of the crowd and stopped only when cautioned by referee Johnny Brassil, who was as busy trying to make him fight cleanly as Greb was trying to batter Loughran all over the ring.”

“[Greb] rarely knew where his punches were going and seemed to care little how they scored. He carried on a battering style of milling that lost its effectiveness in the manner he missed. A number of times he nearly leaped out of the ring, swinging at Loughran, and at close quarters he was often guilty of wrestling,” reported Hamilton.

The United Press noted that a lead right hand from Loughran seemed to set his distance and pace well, and it scored repeatedly on Greb’s jaw, earning him a slight advantage in a number of rounds, in conjunction with Loughran’s always nimble lower half.

The last two rounds saw Loughran visibly hurting Greb to the body, according to most accounts of the bout. Greb savvied his way out of trouble, using his feet to disengage as much as possible.

A news wire via the Seattle Daily Times reported, “Loughran carried five rounds and Greb four, while one round was even. Both men were strong at the finish and at no stage in the match was a knockout imminent. In the fifth round Greb was cautioned by the referee for holding with his right and pounding Loughran’s face with his left.”

And the collision had ended, with Loughran coming out a winner.

Despite fighting one another six times in total, Harry Greb moved on from his series against Tommy Loughran something of a living legend, while Loughran’s celebrity dissipated as years wore on. Greb’s early demise no doubt affected the ageless nature of his tale, but his record speaks for itself.

As for Loughran, maybe he was just too nice a guy.

Patrick Connor is a long time boxing fan and historian. He is additionally a voice actor and co-host of TQBR Radio, Queensberry-Rules' boxing podcast. Follow him on Twitter, Instagram and Vine: @VoiceOfBeard