This is an edited extract from former TQBR staffer Alex McClintock’s debut book, “On the Chin,” available now on the Kindle Store and other e-book retailers through Text Publishing.

A compilation of the grim origin stories of famous boxers would span many leather-bound volumes and remain nowhere near complete, so I’ll content myself with an illustrative example that presented itself, entirely by chance, during the writing of this book.

I was in Mexico City on holidays with my brother George and old sparring partner David. When they went home I was left alone in our Airbnb, a wood-floored apartment in the trendy Roma neighbourhood filled with stylish but deeply uncomfortable mid-century modern furniture — the kind of place designed more for Pinterest than people.

After two weeks of eating large quantities of Mexican food and drinking large volumes of Mexican beer I was in a state of more or less constant digestive distress and would have happily stayed home except that the couch gave me back spasms. I decided I would make the most of my last day in town and walk to the centro historico, grab some lunch, take some photos, maybe go to a museum. It was a stunning day: twenty-five degrees and sunny, with only a light smog. Heading out the door and down the tree-lined Avenida Alvaro Obregon, I ran straight into a forest of red tarpaulins, the unmistakable sign of a tianguis, or street market.

Wandering around foreign flea markets is always a joy — look, their headless dolls are completely different from ours! Is that a cat’s skull? — and soon I was dawdling behind smartly dressed antique shoppers under the nuclear glow imparted by the tarps. I’d gone halfway around the market when I spotted, amid the jumble of rococo candlesticks and bakelite torches, a red boxing glove. A pile of boxing merchandise lay on a plastic drop sheet: old posters and faded photos; a carved wooden figure of a boxer, gloves raised; dozens of copies of The Ring magazine and more obscure Mexican publications, some with faint signatures on the cover in black marker. Basically, a pile of junk. I bent down to get a closer look at a kinetic black and white photo of two skinny young Mexicans flailing at one another, their skin bleached white by the flash.

“Cuanto por la foto?” I asked, casting my eyes further down the path to see if there was anything else of interest for sale.

“Signed by who?” I asked, doubtfully.

I glanced up and realised who I was looking at. He had put on a bit of weight since his fighting days, but looked remarkably well preserved for a person who’d spent more than two decades getting smacked in the face. He hardly even had wrinkles. It was Ruben Olivares, the greatest bantamweight of all time. I was in the presence of a living legend.

“Sorry. You…you are Ruben Olivares,” I said, with the cutting-edge insight for which I am renowned. 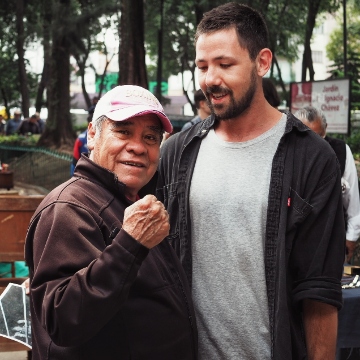 He just stared at me. Maybe he was nervous about the grinning simpleton he saw before him, although I don’t suppose much makes you nervous after winning eighty-nine professional boxing matches, seventy-nine of them by knockout.

“I know who you are,” I said, still awestruck and struggling to put together a coherent sentence in Spanish. “I am Australian. You beat Lionel Rose for the bantamweight championship in 1968.”

“I’ll take the signed photo,” I said. At this, he brightened noticeably and his face cracked into a huge grin, revealing a front left tooth capped in silver. It lent him a roguish air that fitted well with what I knew of his life story, a story that will do as an illustration of the circumstances that create, and sometimes undo, boxers.

Ruben Olivares was born in the state of Guerrero but moved with his parents to the capital aged three. The Mexico City of his childhood was not one of mid-century furniture and strolls down tree-lined streets. It was positively Dickensian. Dirty and overcrowded, it was growing at a near exponential rate as families like his left the countryside, lured by the promise of jobs and a brighter future in the city. In the first two decades of Olivares’ life, Mexico City tripled in size, from a population of three million inhabitants to more than nine million. Imagine Brisbane swelling to the size of Hong Kong in less than a generation and you have a rough idea of the scale of the transformation. The infrastructure, unsurprisingly, lagged.

The Olivares family settled in Bondojito, an area that remains one of the roughest neighbourhoods in the city. Essentially, it was a slum, full of hastily constructed bare concrete houses. Healthcare was limited and schools were overcrowded. Six of Olivares’ twelve siblings died before reaching adulthood. His father left the family to find work in the United States before Ruben turned five.

Olivares started running the streets and smoking marijuana, selling newspapers and petrol to bring in money. When his father came home he helped him as a labourer and worked in a timber workshop, but the work was hard and the days were long. Fist fights were common in the barrio, and Ruben found they were the one thing he did have a talent for. His primary school headmaster, clearly a pragmatic type, was so exasperated with Olivares’ habit of fighting other pupils that he offered him a first-of-its-kind deal: he would receive his diploma, but only if he promised to stop coming to school. He left secondary education after a month, and by the age of fourteen had done a brief stint in prison for getting into a fight at a party he gatecrashed.

At this point, I think it would be fair to say that Olivares’ prospects in life were not dazzling. The best-case scenario was a lifetime of manual labour. You can take your pick for the worst: crime, prison, addiction, homelessness.

Everything changed for Olivares when, at fifteen, he walked into the Jordan boxing gym and found his vocation. He had the perfect build for a bantamweight — short, with a barrel chest and skinny legs — and was possessed of a left hook that resembled a construction accident.

Six years later, after knocking out most of the flyweights and bantamweights Mexico had to offer, which was an awful lot of flyweights and bantamweights, he met Lionel Rose for the championship of the world. Rose was a boxer of rare quality, but the fight with Olivares looked like the nasty end of a nature documentary, with Ruben playing the lion and Lionel the gazelle. There was simply nothing the Australian could do to deter “El Puas,” and Rose was knocked out in five.

Olivares went on to earn millions of dollars, setting records for the weight class. Over a series of three ferocious fights with his countryman Chucho Castillo — one of them captured in the photo I was holding — he would defend, lose and regain the bantamweight crown. He was an idol.

Flush with cash, he bought houses for his brothers and sisters and businesses for his father. He helped out people in the neighbourhood. And he partied as hard as he fought, with one Mexican newspaper labelling him “the undisputed champion of the bender and the cabaret.”

I particularly enjoyed reading his explanation of a shock knockout loss to Canada’s Art Hafey in 1973. Olivares told The Ring he knew he was in trouble when, stumbling back to his hotel at dawn, he crossed paths with the bright-eyed and bushy-tailed Hafey, just leaving to do his roadwork.

The loss focused his mind for a while. He went on to beat Hafey in a rematch and win titles as a featherweight, but he never regained the terrifying form he showed in the late 1960s and early ’70s. He retired for good after a failed comeback in 1988. By then the drugs and alcohol, greedy hangers-on and bad business decisions had eaten up most of the money. It’s a well-worn story, and it’s almost certainly why he was there, in the tianguis, selling memorabilia and posing for pictures.

But standing before him, struggling to understand his rasping, slang-laden Mexican Spanish, watching as locals whispered “El Puas!” and rushed to shake his hand, I was in awe of a life lived to the full. I didn’t entirely comprehend everything he said to me there, but I got the bit about the Rose fight. “He was a beautiful boxer and a great champion. He had a strong jab, but he couldn’t hurt me, that was his problem,” said Olivares, tapping his fist on his substantial jaw.

After a few minutes standing around grinning like an idiot, I became aware that I had exhausted my Spanish and was possibly scaring away other customers. His son, who had been fussing around the stall, took a photo of us together. I struck the same serious, clenched-fist pose that every dude in the world does with a famous boxer, and Ruben signed the photo “to my friend Alex” in looping cursive as I happily handed over my thousand pesos. He needed it more than I did, and had certainly worked hard enough to earn it. Then the former bantamweight champion of the world farewelled me with a piratical grin and a meaty handshake. I stumbled away to look at more bric-a-brac, shaking slightly from excitement.