For the second consecutive summer, an evening in late July was spent by millions watching a “Sharknado” movie on Syfy.

Wednesday night was the premiere of Sharknado 2: The Second One. Not wanting to miss out on the same social media phenomenon as last year during Sharknado’s premiere, the people took to Twitter to snark about sharks. And bad acting. And bad special effects. But all in the name of good fun and a shared communal experience.

The fear of being left out apparently resulted in much bigger ratings. Sharknado 2 drew 3.9 million viewers, approximately three times the number that tuned in for Sharknado. No Syfy original movie has done better. But Bloguin’s Steve Lepore put those ratings in perspective on Twitter.

The least-watched ep. of Game of Thrones this season: 6.31M. RT @alexweprin: 3.9 million viewers for Sharknado 2, per Syfy

Was the sequel as good as the original? Sharknado 2 had better special effects, but I would argue didn’t use them in the best way. There were many shots of the sky above New York City filled with sharks, but weren’t enough direct confrontations between humans and aquatic predators.

I’m thinking of the scene in Sharknado where a shark bites through the roof of a Land Rover (seen from the 0:47 mark to 0:53 in the video below). Yes, the CGI effects were cartoonish and terrible. But that made the scene funnier.

Sharknado 2 may have had a big set piece where sharks attack a subway train. But we don’t actually see the sharks bite through the car. And though we see a couple of people get dragged off the 7 train and Ian Ziering wrestles with a shark, Judah Friedlander’s death is lame. He just kind of dances backwards, presumably pulled by his butt into a shark’s jaws.

Yet we don’t actually see him die. There’s no grisly carnage or bloody spatter. He just kind of disappears. This is one of several places in which the special effects or direction just don’t follow through.

Judd Hirsch’s death was another example. A shark snags him by the leg as he attempts to swing from the roof of one car to another over flood waters. But we don’t see the shark get Hirsch or pull him in the water. That largely happens off-camera. Wouldn’t it have been cooler to see a shark shoot out of the water and gobble him up?

Maybe the problem is that I think there’s a gold standard in shark attack scenes, which is Samuel L. Jackson getting chomped in Deep Blue Sea. Nothing in Sharknado 2 comes even close.

OK, I realize that I’m probably being far too serious, scrutinizing a piece of schlock that was basically created to transcend criticism. But if there was something disappointing about Sharknado 2, it’s that the movie didn’t raise the stakes. None of the primary characters ever felt like they were in danger. Sure, the setting was bigger and so were the set pieces. Many, many more cameos too. Yet it just didn’t feel funny enough.

Well, The Today Show‘s Matt Lauer and Al Roker seemed like they were having fun. It had to be enjoyable playing with their respective images and status as top media personalities. Let’s see Good Morning America‘s George Stephanopoulos and Robin Roberts report on sharknados and stab CGI sharks with umbrellas! (I really would’ve liked seeing Lara Spencer get eaten by a shark.) 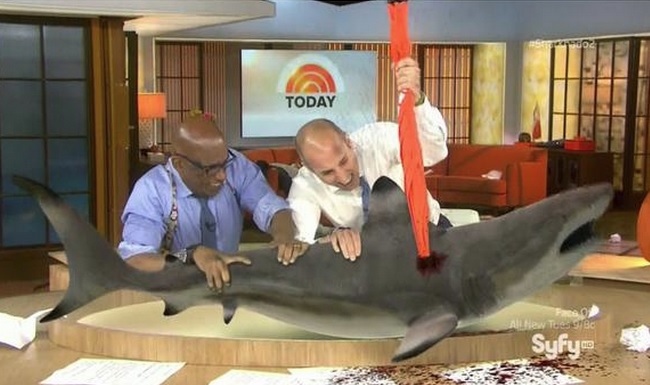 If there was actually a sharknado, we probably would tune into Today to see what Matt and Al were reporting. How much were they paid for their time, which went beyond cameos? Or… is it possible that they asked to be in the movie? Regardless, it’s going to be at least a little bit difficult to take them seriously next time something really serious, like an airplane crash, happens while Today is on live, right?

But even with all the cameos, jokes, winking references, promotions and Twitter snark, the reason these movies have worked is because of Ziering. If there’s one thing to praise about the whole “Sharknado” phenomenon, it’s the guy playing the hero, Fin Shepard. Ziering sells this stuff, man. He doesn’t act like he’s too good to be in a movie like this (of course, we all know he isn’t) or that he’s embarrassed to be associated with this cultural phenomenon. 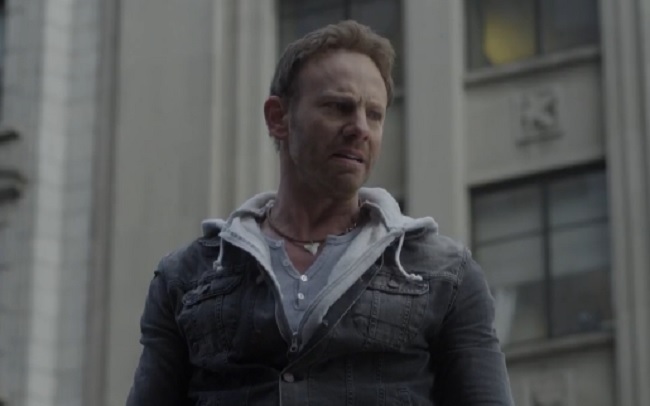 Ziering says every cheesy line believably and actually comes across as someone doing the right thing because he knows he’s the only one who can. Yes, even if that means throwing makeshift bombs into sharknados because it just seems like a good idea, even if he has no clue if it will work. The dude is having a great time saving people and fighting sharks, and that enthusiasm carries these movies. It seems like his fellow cast members get caught up in the spirit of the whole thing with him too.

Again, I know I’m looking at this too seriously, but it’s true: If not for Ziering, I don’t think these “Sharknado” movies would work as well as they have. Somehow, Fin has been called upon to save us from weather events involving flying sharks and he embraces the responsibility. The only thing he’s missing is a true nemesis. Maybe he can take on the shark boss in the next one of these.

Contrast that with Tara Reid, who somehow manages to look like a truly terrible actress even when she’s surrounded by fellow actors genuinely trying to make a decent bad movie. It honestly seemed like she was in a different movie than her co-stars.

If there’s one request I have for a “Sharknado 3” (presuming it gets made), it’s that Reid’s character get killed off within its first five minutes. Like during the cold open, right before the credits. And do it like Samuel L. Jackson got it in Deep Blue Sea. Put all the gore on screen.

Everybody taking the time to inform us all that you’re NOT watching Sharknado tonight: http://t.co/auxOFSy338

One more thing: I’m sure it’s really annoying to see “Sharknado” tweets flood your timeline when you’re not watching the movie and have no interest in it whatsoever. But let people have their fun, OK? If it’s annoying, go do something else and keep it to yourself. Acting like you’re above getting involved just makes you look curmudgeonly. I mean, did you have work to do on Twitter or something?

just my two cents, but the “I’m too cool for Sharknado and will tweet about it” people are more annoying than the Sharknado tweeters

Oh, and if you missed the Sharknado 2 experience or want to go through it again, Syfy is replaying the movie Saturday Aug. 2 at 7 p.m. ET. Or just stream the thing online right now.