On his new stand-up album, Waiting for 2042, comedian Hari Kondabolu has a joke where he wonders “What the f*** happened to Weezer?” Kondabolu’s joke meanders to a self-proclaimed “disappointing end” which the comedian explains is his attempt to “echo the trajectory of Weezer’s career.” It’s a question that any fan of The Blue Album or Pinkerton have frequently asked themselves over the past 13 years since the release of The Green Album.

Twenty years ago this week, a little over a month after the death of Kurt Cobain, The Blue Album was released. It was the start of the shift from the angsty, dreary sound of grunge to the power pop rock/punk that would dominate the rest of the decade. Yes, we can thank Weezer for bands like Fastball and Semisonic getting radio play. Weezer’s debut album has sold over three million copies, won the band four MTV Video Music Awards, and was named by Pitchfork as the 26th best album of the 1990’s (Pinkerton was 53rd).

Since 2001, Weezer has released six albums. Each of them a different level of disappointing after the commercial success of The Blue Album and the cult status achieved by Pinkerton. So what happened? Why does modern-day Weezer seem so disconnected from what made them, in the minds of many, so great? Seriously, what the f*** happened to Weezer? 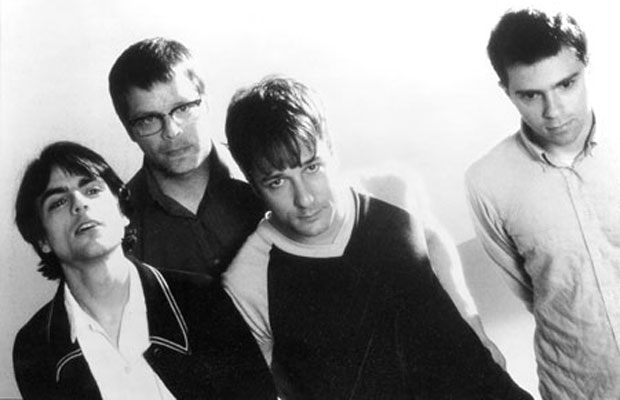 Kondabolu touches on this during his joke while noticing that he is the “creepy old dude” in the pit at a Weezer show, even though he is only 28. While the fans of the first two Weezer albums have grown-up, gone to college, married, and had kids (it should be noted that the guys in Weezer have done all of these) the band continues to market and create music for high schoolers.

I’ve been out of high school for half my life (I’m 36), I have no idea what is considered cool with the kids anymore. I think Vampire Weekend is cool, and I bet this means they are totally NOT COOL. So by this rationale, a Weezer album that I think is terrible is probably pretty cool with the kids at your local high school.

All six of the albums released since 2001 seem to be geared toward a younger demographic. When you write songs about smoking weed, partying, and going to the mall that are roughly three minutes long, you are definitely setting yourself up to have a specific demographic come to your shows and listen to your music. I don’t think a 36-year-old, graying, married, (soon-to-be) father of two is that demographic. This is probably why I listen to Vampire Weekend; they sing about first world guilt and horchata with an Afrobeat sound.

The Blue Album was such a huge success that it caught the band, especially front man Rivers Cuomo, off-guard. Cuomo retreated to Harvard where writer’s block hindered his work on Pinkerton before eventually settling on the darker, melancholy songs that appear on the album. After Pinkerton was a failure and the band began appearing in “Where Are They Now?” segments, Cuomo slipped into a deep depression, bassist Matt Sharp left the group, and it was five years before they released another album.

Upon their return, Weezer seemed to understand the formula that made them successful, and they really wanted regain the success level they had in 1994. The success of The Blue Album can partly be attributed to the quirky, Spike Jonze directed videos for “Undone – The Sweater Song” and “Buddy Holly.” The content of Pinkerton didn’t really lend itself to quirkiness, and the videos for “El Scorcho” and “The Good Life” (featuring a pre-24 Mary Lynn Rajskub) failed to catch on with the MTV crowd.

Starting with The Green Album and then with each of their subsequent releases, Weezer has appeared in videos with sumo wrestlers, with The Muppets, inside a burning house, with YouTube stars, and as a fake pre-Weezer group called “Weeze” fronted by Elisha Cuthbert (thus completing the 24 circle). And that’s only about half the videos they’ve produced for the six, post-Pinkerton albums.

The internet can be an easy way to reach a massive audience, and when you create a sub-four minute song with a catchy hook and starring The Muppets, you are almost guaranteed that a few million people will watch. It’s really smart marketing, but it also means that you’re constantly trying to create the next catchy pop song to include with these videos if you want to keep that audience. Sometimes you try too hard, and you start writing songs like “Beverly Hills,” which is Weezer’s most successful song, but also pretty terrible. 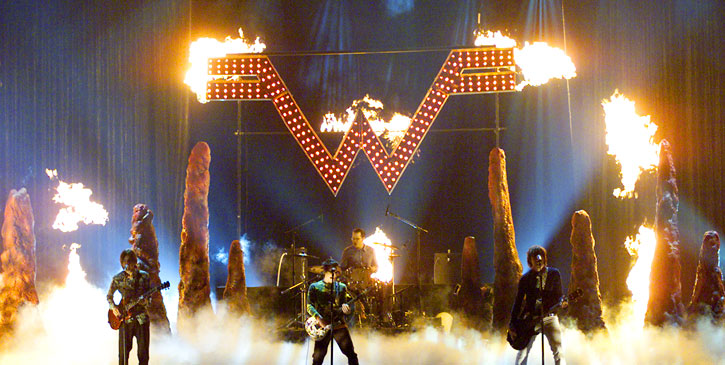 The Rivers as Megalomaniac Theory

I’ll keep this one short. The fact that Rivers Cuomo is the unrivaled leader of Weezer isn’t really breaking news. He is credited as the sole songwriter and composer of every song from the first five Weezer albums. Rivers Cuomo is Weezer, but rarely does a rock band maintain a level of exceptional work when it is being controlled by one person.

The most obvious difference between the first two Weezer albums, and everything that has come after, is the absence of original bassist Matt Sharp. In the years between The Blue Album, and the release of Pinkerton, Sharp recorded an album with his group The Rentals. The Return of the Rentals had a minor hit with “Friends of P,” and when Cuomo put Weezer on hiatus after Pinkerton flopped, Sharp left Weezer in 1998 to pursue rock stardom with The Rentals. When the band’s follow-up album, Seven More Minutes, achieved even less success than Pinkerton, Sharp disbanded The Rentals for almost six years.

What is clear with the first two Rentals albums is that Sharp knows how to write a good, fun pop song. Which leads fans of the first two Weezer albums to wonder, is Matt Sharp the reason Weezer kind of sucks in 2014? Could Sharp have been the quiet editor to Cuomo, passing along ideas and thoughts about Cuomo’s songs? In 2002, Sharp filed a lawsuit claiming that he was owed royalties for co-writing “Undone” and 25 percent of the first nine tracks on Pinkerton. The two groups settled out of court, which either means Sharp wrote some Weezer songs or the band didn’t want the case to make it to the courthouse. 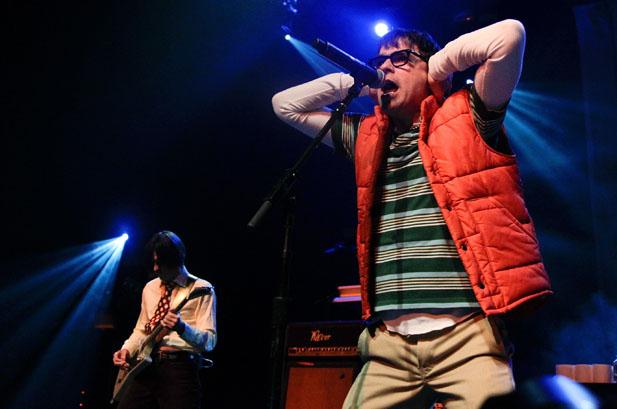 The answer to the question, “What the f*** happened to Weezer?” is probably a bit of all of the above. Without Sharp around to reel in Cuomo, he assumed complete control of the group, and because the only thing Cuomo ever wanted was for Weezer (and himself) to be popular he found his audience in teenagers, and for the past 20 years has only written songs that they would enjoy. Cuomo may literally be David Wooderson from Dazed and Confused, “I get older, they stay the same age.”

As long as Weezer continues to follow the formula they have been using since 2001, they should continue to have the same level of success they’ve had most of their career. They are currently at work on their ninth studio album, and will be working again with Cars frontman Ric Ocasek, who produced The Blue Album and The Green Album. A clip posted early last month is leading some to speculate that the album will be a departure from the sound of recent Weezer albums.

Unfortunately, this won’t mean much to the Weezer fans who only own The Blue Album and Pinkerton because most of us haven’t cared about Weezer for a long time.