Netflix debuted its latest exclusive series, Unbreakable Kimmy Schmidt last weekend. Taking a plunge into sitcoms seemed like a nice change from the hour-long dramas that the network has mostly produced. The series was originally produced for NBC, but ultimately ended up at Netflix, which ordered two seasons.

Tim Livingston, Andrew Bucholtz and Ian Casselberry binged through the first season’s 13 episodes and had a conversation about the latest wacky warped sitcom from the minds of Tina Fey and Robert Carlock, starring Ellie Kemper. And if you haven’t watched it yet, don’t worry — we kept our discussion spoiler-free!

Tim: So Tina Fey is a top three TV showrunner, right? After Monday’s supposedly incredible episode of Better Call Saul (Which I haven’t seen yet, no spoilers, damn it!) Vince Gilligan is the guy people point to as the king of all television, and they very well might be right. He has The X-Files. He has Breaking Bad. He now has Better Call Saul, which is starting to look Bad-esque. (I imagine AMC is regularly presenting him with baubles of high royalty for actually having a spin-off that not only is worth watching, but is going to save their collective post-BB/Mad Men asses.)

But people seem to forget that Fey, for the better part of 15 years, has written some of the best SNL stuff in history, one of the best comedies in the history of television, and now, its karmic successor in Unbreakable Kimmy Schmidt. This show might as well be called “31 Rock: 30 Rock II.” The way it’s shot, the way it’s written, the music (which is again brilliantly provided by Fey’s husband Jeff Richmond, who did everything for 30 Rock), it’s all there. This snuck under my Netflix nose, as I was still coming off the residue of a divisive trip by Frank Underwood to the White House, and quickly got on board once I saw the results. I was expecting it to be funny. I wasn’t expecting it to be immediately the funniest show on television. 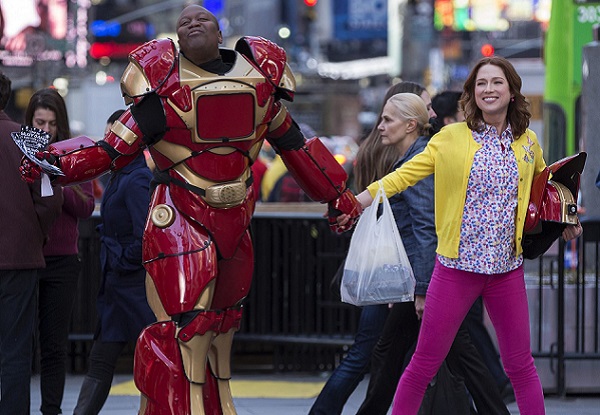 Andrew: I went into this expecting something along the lines of 30 Rock, given the involvement of Tina Fey and Robert Carlock and the New York setting. The 30 Rock influence is obvious, and that’s not a bad thing given how enjoyable that show was, but Unbreakable Kimmy Schmidt manages to set itself apart and feel like something very new.

For one thing, Kimmy feels much more consistently positive than 30 Rock. 30 Rock was hilarious, but a lot of those laughs were at how dumb, crazy, inept and sometimes sad its characters were (Lutz and his pretend car, most of the things Tracy and Jenna did, even a lot of Liz’s life). Kimmy still gets some humor from its characters’ pitfalls, but, to me at least, it presents Kimmy and Titus, in particular, as reasonably smart. A lot of the comedy comes instead from their different worldviews interacting or from them being put in odd situations. The show seems more upbeat overall than 30 Rock did, which is interesting considering the darker concept. I think that’s a decision that works out very well, though: It adds to the humor and makes you root for the characters. It also helps make this not just “30 Rock 2: Rock Harder.”

The overall positivity and energy Ellie Kemper brings to Kimmy, especially in the early episodes, might be what stood out to me the most. This is a character who’s been through an awful backstory and has a terrible first couple of days in New York, but still is smiling, happy and making the best of it. I think it’s important that Kemper doesn’t portray Kimmy as dumb or overly naive: She’s unfamiliar with New York and recent history, but she’s able to figure a lot of it out pretty quickly, and she winds up helping most of the people she interacts with (Titus and Mrs. Voorhees in particular). She’s far from helpless, and she’s a character who’s easy to like and support, not just a target of jokes.

Ian: I knew so little about this show going in, other than Tina Fey was somehow involved and Ellie Kemper was the lead. That was enough to pique my interest, although I have to admit binging through 30-minute episodes and being able to get through a season quickly also appealed to me. Fortunately, the tone of the show and fast pace of the humor pulled me in right away. There almost wasn’t a chance to think, “Am I liking this?”

However, one thing which struck me immediately — and Andrew touched on this a bit — is how the series starts from a very dark place. Obviously, the premise of being kidnapped and kept in a bunker for 15 years is mined for laughs throughout the 13 episodes. But I just had no idea that’s where this show was beginning. It’s a very warped take on the “small town girl goes to the big city” narrative, which is what makes it so funny. Moving to New York would be an adjustment for just about anyone, but how about someone who’s been checked out of the world for 15 years?

I’m curious what you guys think this show is really about? Maybe that’s thinking about it too much or in the wrong way. But if 30 Rock was about working on a sketch comedy show, or trying to be creative under a big corporate umbrella, or even the life of an older single woman living in NYC, what is Unbreakable Kimmy Schmidt about?

I feel like there’s something here about how we’re becoming increasingly detached from each other as a society. Like all the millennial types are constantly looking at their phones. Titus is in his own self-delusional world about his talents as an actor and path to success. Mrs. Voorhees is also detached as a one-percenter who has no clue about what normal people go through. And obviously, there’s Kimmy whose frame of reference is the 1990s and has a very “what the hell is going on here?” view, even as she herself is innocent and impressionable. 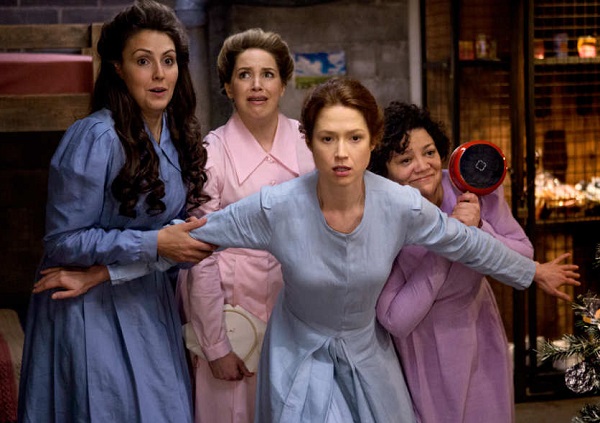 Tim: I think the thing that stuck out to me in determining exactly what this show as about was the fact that, like 30 Rock, there were many times where the social commentary was almost just thrown in because it just happened to come along in the story. I saw them as checkpoints, almost. Kimmy slowly started getting things as the season went along, which was interesting when she would make comments that reminded you that she lived in a bunker for 15 years.

The detachment theory is a good one, especially once we get to the end of the season with the courtroom battle. (By the way, why is Indiana the middle America punching bag for SNL alums? First Pawnee, now Durnsville. I await Pete Davidson getting his own show based on being a misunderstood youth in the small Indiana city of Cedarburg.) The show really seems to be hammering home the idea of what society has surrounded itself with and how we can easily be led astray by anyone with charisma, which plays up into everything the show touches on from religion to politics to wealth.

The thing that stands out to me is that Kimmy is portrayed not just as a moral beacon, but as a very adaptable person. Obviously, the show is called Unbreakable Kimmy Schmidt for a reason, but when you first start watching, you think it’s very much because of her outgoing personality. In reality, it’s about her becoming someone that the people involved in her life can depend upon. She’s willing to try new things, but not at the expense of her idea of a good life. She might have been portrayed as someone with a middle-school education from the start, which implied her being simple, but it’s more about her having idealistic views of the world and actually making them worthwhile to the people she cares about.

Plus, I’m definitely getting a Mary Tyler Moore Show vibe here, which is a good thing.

Andrew: Ian, you make a great point about the detachment, and that fits well with Tim’s point about society being led astray by anyone with charisma. Reverend Richard Wayne Gary Wayne and the way he plays to the jury is the most obvious example of this, but for me, the even more potent one is Nick Kroll’s perfect performance as the spin class instructor. A doomsday cult is easy to pass off as “I’d never join that”: I think the show makes a really interesting point about how that isn’t necessarily so different from other parts of our modern reality.

There are some good points about the need to belong, too, from Xanthippe and her friends to the Kimmy/Titus/Lillian circle to Mrs. Voorhees’ outrage against the robot. None of this comes off as particularly preachy to me, and it feels like a comedy-first show, but it’s one that has a lot to say as well. 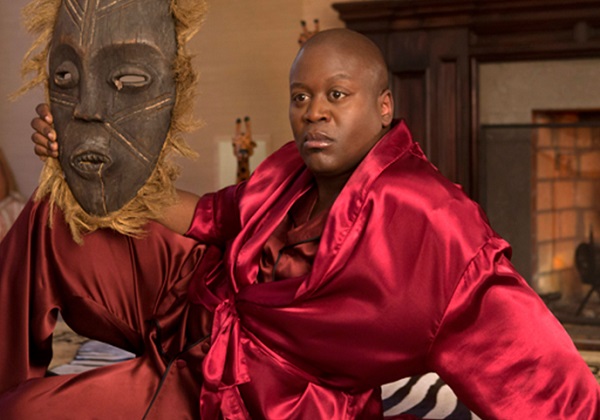 Ian: Was there anything about this that you didn’t like? I went back and forth on Titus (played by Tituss Burgess). I understood his purpose, basically being Kimmy’s liaison back into the real world. But at times, he was so cartoonish that I wondered if how much he added to the show. Was he supposed to be like a funhouse mirror version of Kimmy? Yet if Titus wasn’t there, well, there would be kind of a void. Maybe he’s just a hilarious character and needs to be appreciated for that. I’m certainly intrigued by the cliffhanger he was involved in at the very end.

Andrew: I appreciated Titus’ specific brand of weirdness, as I think it let him (on pop culture, New York, etc) and Kimmy (on most other things) take turns playing the straight man (figuratively speaking, of course!) for each other, letting each of them have funny, ludicrous moments. Some of his particular craziness (especially the Pinot Noir video) stood out for me as high‎lights of the show. I’d agree there’s a risk of him becoming too cartoony, though: I thought on the whole he was just on the right side of that line, but it’s something they’ll have to be careful of in season two. Also, cartoony isn’t always bad: Lillian felt even less grounded and more cartoony than Titus to me at times, but they used that insanity from her sparingly, so it didn’t seem off to me. I think the key is finding the right balance of cartoon and believable.

There wasn’t much I didn’t like, but the Jacqueline Voorhees subplots were a bit less appealing to me. Jane Krakowski had some good moments as Mrs. Voorhees, but often felt just like a relocated Jenna from 30 Rock (and Jenna wasn’t one of my favourites there either); we’ve seen a lot of those kinds of jokes before. Some of them were well done (the robot, party and talcum powder cracked me up), some less so. The Native American backstory for her has also prompted some deserved criticism: I’m not sure that was the wisest choice. I think there’s some good comedy potential with that character, but I’d like to see them differentiate her from Jenna a bit more and find what makes her more unique.

What did you think of Unbreakable Kimmy Schmidt? Join in our conversation in the comments, on our Facebook page or Twitter.