Comedian Amy Schumer made an appearance on last week’s (May 25) episode of the The Bachelorette to positive reception from fans. Schumer was likely there, in part, as a tie-in to her upcoming movie, Trainwreck — the trailer for which aired right before her appearance.

It was a curious move, nonetheless, as most recent celebrity appearances on the show (and its sister show, The Bachelor) have included country duo Big & Rich, 90’s R&B group Boyz II Men and rapper Soulja Boy. (Remember him?) Compared to these past-their-prime personalities, Schumer is at the top of her game with her Comedy Central show, Inside Amy Schumer, filling our Facebook feeds every Wednesday. The hetero-normative values of a show like The Bachelorette also don’t mesh well with Schumer’s feminist sketches either.

Despite these conflicts, Schumer helped the guys vying for Kaitlyn’s heart with their stand-up routines. Earlier in the episode, boxer Talia Ali helped another group of guys train for a boxing tournament.

Schumer’s appearance on the show was well-received to say the least, especially by the show’s target audience which can be seen in two of the tweets made during the broadcast.

Plot Twist: Kaitlyn ditches all the guys and runs off into the sunset, laughing with Amy Schumer #TheBachelorette — Mads (@mads_schaetzl) May 26, 2015

Robert Mills, ABC Entertainment’s new senior vice president of alternative series, specials and late-night programming, took notice of the positive reception himsefl and made an “offer” to Schumer via Twitter.

OK here is the official offer to @amyschumer to become #TheBachelorette. Just say yes and we start tomorrow. #DraftAmy

I took a mini-poll myself, asking the female members of The Bachelor/Bachelorette fantasy league that I manage. (It’s exactly what it sounds like.) Predictably, they all had the same positive sentiment. One league member was even convinced to watch Schumer’s show.

“I like her on the show because she was basically saying the kind of snarky comments we make when watching the show,” she said. “She seemed to realize how ridiculous the show is while at the same time understanding why we find it so much fun.”

As other networks do with their reality shows and scripted counterparts, ABC goes out of its way to capture the fan and recap culture surrounding The Bachelorette and The Bachelor. This includes hashtag-specific Twitter feeds in the corner of the screen and live events preceding and following specific episodes in which former contestants and members of the studio audience comment about the show’s happenings.

Of course, this all comes off as heavily produced and leaves the same feeling we all had once our parents joined Facebook. Trying to be “cool” is usually a one-way, bullet train in the opposite direction. Any celebrity, not just Schumer, going on the show would lead to the same fate for all parties involved.

Despite the risk of suffering the wrath of “The Poochie-effect,” adding a celebrity is the type of kick in the ass this show needs. As a fan of Schumer’s and The Bachelor franchise as a whole, I can’t help but be concerned about the show’s “old-fashioned nature,” whether it’s the lack of diversity in contestants — the show has also yet to cast a minority in the titular role — or the edits that play the budding friendship of Clint and J.J. (two contestants on the current season) for laughs because, y’know, two guys can’t be heterosexual AND close friends. 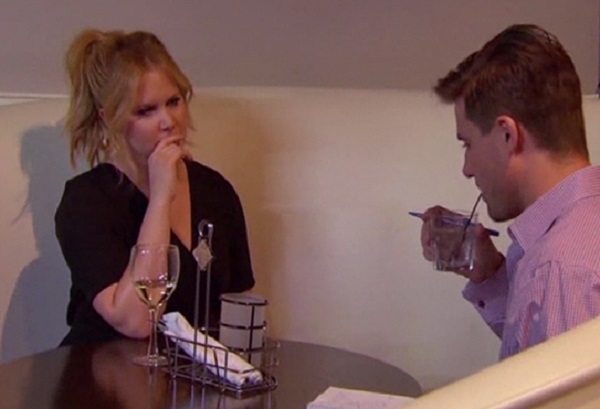 By casting Schumer or someone like her — read: someone who isn’t in the farm system that is the pool of runner-ups from the previous season — some of these unfortunate trends and the other B.S. elements of the show could change, or at least be challenged. The other possibility of this situation is that ABC imposes its will, forcing the celebrity to conform to its vision the same way its parent company, Disney, does with the directors on Marvel films to make sure they all have the same tone.

The show isn’t against changing things up, as they have done so before — albeit gradually. This season featured two Bachelorettes, from whom the contestants voted for one to be THE Bachelorette on the first episode. In the case of Schumer, she would have to say she’s “looking for love” with a straight face, which is a ridiculous statement when one’s about to do so on national television. On a Grantland podcast (also owned by Disney), host Chris Harrison spoke to whether they would ever have an athlete/celebrity on the show:

“Here’s the problem… and I know a bunch of athletes. I’m friends with some of these guys… um… I won’t name names but we’ve had these conversations of ‘Would you have this guy or this guy’ and I said ‘Well, are you serious about actually having a relationship?’ At the end of this, is there any possibility you would settle down? And that doesn’t mean, by the way, you just get to bang 25 women. That’s not this show. And they’re like ‘Ohhh yeah…’ and I’m like ‘Yeah, exactly.'”

The lack of believability is the biggest reason bringing on a celebrity, Schumer or otherwise, will remain fan fiction for the foreseeable future. Once the novelty wears off in the middle of the 24-plus hour season, the show becomes Flavor of Love. Every reality show eventually takes the celebrity route as ratings dip. Reality staples like Survivor, The Apprentice, and The Amazing Race all have incorporated celebrities into their format. However, these are often filled with” C-List” celebrities who need these shows to regain their relevance with the mainstream.

As I said, Schumer is well past that with her TV show and upcoming movie. The Bachelorette brand would benefit much more from Schumer’s appearance than Schumer would herself. It would certainly put her “cred” as a comedian in question, something about which the Internet is extremely fickle. If ABC found someone in the same vein as Schumer and was willing to adjust, the show could find the new identity it sorely needs.