Last week, Harry Shearer announced that he will not be returning to The Simpsons after being with the show since its premiere in 1989. Marcia Wallace (Mrs. Krabapple) passed away last year and the show hasn’t returned to the character since. However, despite the extensive list of iconic characters voiced by Shearer, the show will move forward with them sans Shearer’s talent for at least two more seasons.

In light of this news, Tyler Lyon, Liam McGuire and Andrew Bucholtz did what Simpsons fans do best and reminisced about favorite characters, lines, jokes and other moments Shearer brought to the series. 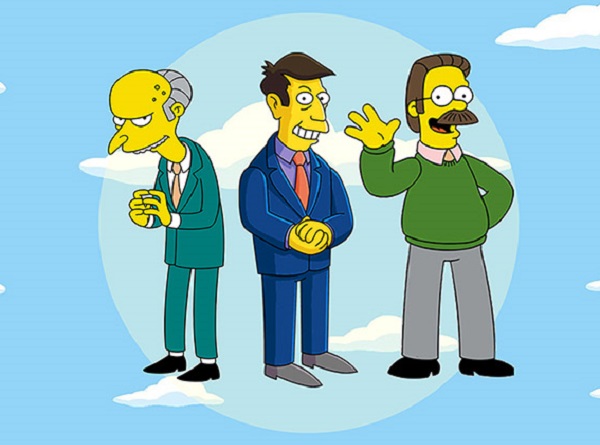 Liam: I’m going to be explaining my feelings to this news with videos. I had the exact same reaction as Flanders when I found out Shearer was leaving the show.

This stands for all the characters mentioned in this post, but I can’t imagine anybody else doing Flanders. He’s Homer’s loveable rival. Anyone else doing the voice, unless they splice together old audio, will feel like a ripoff.

Tyler: It’s sad to think the owner of The Leftorium won’t have the same dee-diddly-personal-didity. The quintessential episode I always think of is “When Flanders Failed” from the third season, where he quits his job and opens the store. Before the second season with “Homer vs. Lisa and the 8th Commandment,” Flanders didn’t have a prominent moral compass and was only meant to be a wealthier, superior father and husband to Homer. By the end of that season, he’s likely the most iconic character with Shearer’s voice.

Andrew: “Huh. Looks like heaven is easier to get into than Arizona State.” The brief moments of Flanders’ doubt, sarcasm or even minor annoyance with Homer stood out for me. He’s such a goody-two-shoes so much of the time that it’s always fun seeing him crack, even slightly.

Liam: Boo-urns to Mr. Burns possibly being voiced by somebody else. His tone was slimy and perfect.

Preach, Hans Moleman — I’ll be spinning this song while sobbing for days.

Tyler: There are so many great Mr. Burns moments, whether it’s his urging Smithers to “hop in” the Spruce Moose at gunpoint during his Howard Hughes-esque plunge into madness, the crease in his legs that made him “look like a square” at The Who concert in Olde Springfield or best of all, his managerial efforts behind the Power Plant’s softball team when he kicked out Don Mattingly for not shaving his sideburns and the genius move of pinch-hitting Homer for Darryl Strawberry despite the Straw’s nine home runs to get that game-winning run off a hit-by-the pitch.

Andrew: “The telephone is so impersonal. I prefer the hands-on touch you only get with hired goons.” Mr. Burns, ever the caring employer. Shearer’s portrayal of Burns managed to perfectly walk the lines between cunning and oblivious and between villainous and surprisingly human.

Liam: Watching The Simpsons without Shearer as Smithers has me feeling like Smithers at a strip club.

Smithers was the ultimate, loyal servant. He loved Mr. Burns like nobody else. His nasally voice made his dream sequences perfect.

To see both Smithers and Mr. Burns (and, of course, all the other characters in the show) possibly recast is just devastating.

Andrew: “They’re not booing you, sir. They’re shouting Boo-urns.” Smithers’ rose-coloured glasses for Burns, and his constant attempts to present the world in the most favourable light to his boss, were amazing. Shearer did a perfect job of portraying both sides of that remarkable relationship.

Liam: No more Armin Tamzarian fills me with rage like Skinner driving a bus.

Tyler: SKIINNNERRRR!!!! The symbol of principals and Mama’s Boys everywhere. I love his ability to survive the most mundane of tasks by “making a game out of it.” I also loved the idea that he tried to make up for his time in Vietnam by running Springfield Elementary. His desperate attempts to please Superintendent “Super Nintendo” Chalmers was perfect. Shearer gave him the perfect vanilla flavor that made him the true “People’s Principal.”

Andrew: “Do you kids want to be like the real UN, or do you just want to squabble and waste time?” Skinner’s surprising (and often misplaced) faith in societal institutions stood out for me. Jaded principals are common, but Shearer’s portrayal of Skinner/Tamzarian was more than that; someone who keeps getting kicked by the world and yet keeps coming back for more.

Liam: Sky-O-Nara to Kent Brockman’s beautiful voice. He was a perfect parody of media.

Tyler: Kent Brockman always cracked me up with the way he read the news only to insert his own views, which feels more relevant today than ever before. Whether it’s passive-aggressive lines about cartoon violence — “Are cartoons too violent? Most people would say ‘No, what kind of stupid question is that?'” — or the way he opened our eyes to our own societal flaws, “America has a tradition of turning outlaws into legends after their deaths: Billy the Kid. Bonnie and Clyde. Jesus Christ.”

My favorite non-ant overlords moment, though, is in the season premiere of the fourth season, “Kamp Krusty,” where he interviews Bart, who as the leader of the camper uprising asks, “Can I say ‘crappy’ on TV?” to which the news man replies, “Yes, on THIS network you can.” Not living state-side at the time, I wonder if this was a nod to Fox, which built its reputation as the edgier network channel. Few anchors could transition from a house fire to tell us if spring clothespins work better than the other kind. He provided insight few local anchors can replicate.

Andrew: There are a million memorable Kent Brockman moments, from his leading questions on ”Is it time to crack each others’ heads open and feast on the goo inside?” to his bored soccer commentary to his (brief) renegade takedown of corporate media. But “I, for one, welcome our new insect overlords” is the one that stands out most to me. The line that spawned a thousand memes is not only a great demonstration of Brockman’s spinelessness and willingness to change horses in midstream, it’s also a perfect example of media jumping to conclusions and going all-in when they’re absolutely wrong.

Liam: Unfortunately, unlike The Simpsons, Julius Hibbert knows the right way to go.

We’ll miss his trademark laugh. Nobody can replicate that.

Tyler: Oh, the many fashions of Dr. Hibbert. Whether it’s his Cosby sweaters, dreadlocks, afro or Mr. T phase, he guided us through the flashback episodes and cared for them in their highest need. Plus, he could always be good for a “Wowipop.”

Andrew: Hibbert’s inappropriate laughs always cracked me up. My favourite might be when he cackles and tells Mike Scioscia “No. By tomorrow, you’ll barely be able to breathe.” Perfect.

Liam: Will you watch The Simpsons without Harry Shearer? I have the same reaction to Lenny when asked by Homer if he’ll join his Super Bowl bus.

Tyler: “Not Lenny! NOT LENNY!” The third most popular buddhist in Springfield (let’s be honest, Lisa and his hetero-life partner, Carl Carlson top him there), Lenny Leonard is the everyman we all strive to be. He helped us find the greatness of “alcohol and night swimming,” and that we aren’t supposed to get pudding in our eye.

Andrew: “The Truth About Carl: He’s Great!” will always stand out for me. What a great foray into journalism for Lenny.

Tyler: I would be remiss if I didn’t give a shout-out to Springfield Retirement Castle resident, Jasper Beardly, especially for his strict but fair form of discipline with a cricket bat. Shearer also brings to mind his re-appearance as a Spinal Tap bassist Derek Smalls with the group’s cameo in “The Otto Show,” especially in the interview scene with KBBL’s Bill and Marty, the former also voiced by Shearer.

Shearer’s contributions to the show are rivaled perhaps only by Dan Castellaneta and Hank Azaria, which speaks to his importance to the show. The characters will live on for at least two more seasons, but they wouldn’t have been born without Shearer, who embodied them perfectly.

Liam: I have been a lifelong Simpsons fan. Growing up in Canada, they used to air repeats of the show on the CBC in the early evening and I’d watch it almost every day. It was part of my ritual. I’ve seen each season of the earlier episodes probably three to four times each. So to say Shearer is leaving is a disappointment would be a massive understatement. He does so many iconic characters, and while none of them are Simpsons family members, he’s just as important as anybody else on the cast.

Whether he left on his own, or he had his salary negotiations go awry, this is a damn shame. The Simpsons have long been going stale, and the thing that kept me tuning in from time to time was knowing you were going to spend time with these characters and their voices. While the current offering isn’t on par with the classic episodes of old, it’s still The Simpsons. So yes, it’s easy to look at the show and wonder what happened, but being on the air for as long as it has, it’s managed to stay remarkably relevant.

While many associate Family Guy with the idea of a cutaway gag, mostly from their gross overuse, ultimately The Simpsons were the pioneers of that concept. They were pioneers of the animated comedy. It’s a shame with a dip in quality that the writers and producers lowered themselves to the level of Family Guy, by doing things like having a crossover episode where a rape joke was made. The Simpsons stands on its own. I’m not one of those Simpsons fans that think you can only watch the first 25 seasons to enjoy the show — yes, it was better — but it’s still better than a lot of current offerings, including Family Guy.

I’m happy to say The Simpsons did it. Shearer will be missed.

Andrew: A big part of what made The Simpsons so memorable for me was that its funniest moments often were not from its titular family, but rather the rest of the weirdos who populated Springfield. Shearer was such a huge part of that, and with the likes of Mr. Burns and Principal Skinner in particular, he found a way to make these supporting characters more than one-note while retaining their hilarity. The world of Springfield was crucial to what made The Simpsons great, and Shearer was a vital part of that. His contributions should always be remembered.