Brooklyn Nine-Nine‘s third-season premiere Sunday brought some significant changes for the show, following on from the cliffhangers in May’s second-season finale, but it also suggested that the core of this comedy is still very much intact.

The show has largely been character-driven rather than plot-driven over its first two seasons, with much of the humor arising from bouncing these characters off each other in relatively routine situations at their police precinct, and Sunday’s “New Captain” wisely continued that, finding room for plenty of small character beats in the midst of dealing with an assortment of significant plot threads. The handling of the plot threads was deft, though; the big plot developments weren’t ignored, and we didn’t see instantaneous returns to normal, but the plot points were used to bring different comedy and different facets of these characters out, in a natural way that maintained the key parts of the show.

This is further evidence suggesting Brooklyn Nine-Nine can survive and thrive under a variety of circumstances, and that its writers and producers understand what problematic roads to avoid. (Spoilers for “New Captain” follow.)

One of Brooklyn Nine-Nine‘s central pillars has been the relationship between juvenile-but-brilliant Detective Jake Peralta (Andy Samberg) and respectable-and-restrained Captain Raymond Holt (Andre Braugher), and those two don’t have a scene together in “New Captain.” That’s somewhat natural, considering that season two concluded with Holt’s promotion out of the precinct to the role of deputy chief and a public-relations job, but keep in mind that season one ended with Peralta going undercover for six months, which was then only shown in brief flashbacks at the start of the second season.

It would have been possible for Brooklyn Nine-Nine to start this year with everything being back to normal and a quick explanation of why it was that way, but letting us see the precinct without Holt and Holt’s frustration with his new job felt more effective.

The really smart move here was allowing the stories of both Holt and the other characters to play out in character-driven fashion typical of the show, though. Sending assistant Gina Linetti (Chelsea Peretti) with Holt when he left at the end of season two didn’t necessarily feel like a big moment at the time, especially with all the other drama playing out. But in this episode, it proved to be well worthwhile. 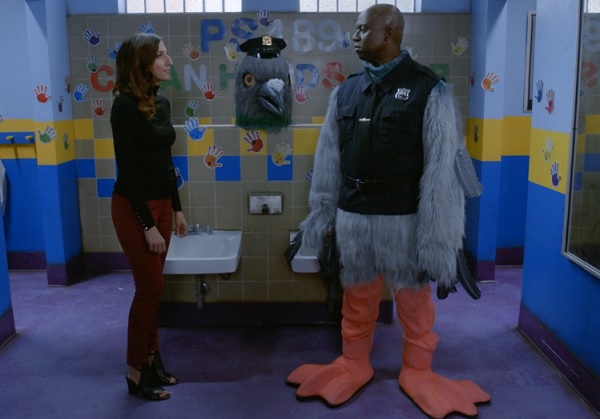 The Holt-Gina interactions while choosing a name for the NYPD’s new pigeon mascot (and then seeing Holt dress up as him) felt relatable to the rest of the show, and while the traded insults between Holt and Bureau Chief Madeleine Wuntch (Kyra Sedgwick) are great, having Gina weigh in on those made it feel less like Holt was off on his own disconnected adventure. What’s also interesting there is that the writers intended Gina’s inclusion as a way to reassure viewers that Holt wasn’t leaving for good, as writer and co-executive producer Luke Del Tredici told The AV Club’s Marah Eakin this week:

LDT: Yeah, that was a real surprise to all of us, how much people thought that we might actually be getting rid of Andre Braugher. And we were worried about it a little bit, but we thought that if we put Gina with him, it would be a sign to people that, no, we’re not getting rid of two characters. We’re just shaking things up a little bit. And still, every writer has been inundated with questions about what happened with Andre Braugher and why he wanted to leave the show. It’s just like, no, no, no, it’s going to be fine. We’re not getting rid of everyone’s favorite characters.

AVC: That’s the initial reassurance anyone reading this article will need.

That storytelling benefit might have seemed tough to believe at first, but there were actually some solid stories that developed out of Holt and Gina’s isolation, and this was just the first episode of it. Gina aptly describes herself as “the human form of the 100 emoji” in this episode, and her role in both standing up for Holt (“This man is a Timberlake and you’re treating him like a Fatone!”) and dissuading him from rash action (“This is how it ends, with me standing on the urine-soaked floor of a elementary school bathroom in a third-rate bird costume. I quit.”) proves rather important.

Those moments also showed some lesser-known sides of the characters; seeing the oft-acerbic Gina as supportive and encouraging is unusual, as is seeing the calm-and-collected Holt frustrated and broken (which has been really brought out well throughout his various run-ins with Wuntch over the course of the show). These characters aren’t one- or two-dimensional, and focusing on a pairing like Holt-Gina helps to illustrate that. 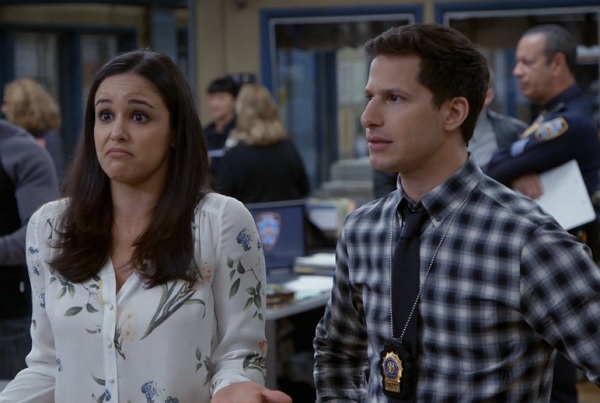 Meanwhile, the relationship between Peralta and Detective Amy Santiago (Melissa Fumero) has been going back and forth since the pilot, but season two’s conclusion of them kissing in the evidence room set up potential pitfalls of either instantaneously becoming a perfect couple or electing to act as if it had never happened and playing out the “will-they-or-won’t-they” string for another season or two. Fortunately, both of those traps were avoided, and their relationship seemed to play out in a logical way; they realized the potential problems ahead, tried to play it light and casual (which worked better before they opted to drink a whole lot of shots), had difficulties with their coworkers, eventually called it off and then both realized that was the wrong move.

The clever part here is that all this relationship plotting was largely played for laughs, from the intrusions and interjections of Detective Charles Boyle (Joe Lo Truglio) to the various insecurities they both show to the way they’re eventually caught by new captain Seth Dozerman (Bill Hader) with the great line “So I guess it is hos before chos.” The plot was advanced throughout this episode, but in a way that felt true to the characters and drove the comedy rather than one that tried to make this too serious.

Hader’s role as Dozerman deserves further discussion. If there was a part of this premiere that didn’t quite click, it might have been him, and that may be more about how the character was written than any shortfall in how he played it. Dozerman’s nutty efficiency and numbers focus led to some decent jokes, particularly with rebellious Detective Rosa Diaz (Stephanie Beatriz) telling Sergeant Terry Jeffords (Terry Crews) that she’d take the new mandatory productivity-focused iPad Dozerman handed out, but only use it to play the backgammon app that he was unable to uninstall.

But his character didn’t feel particularly fresh or clever. He was there to show what horrors the Nine-Nine could face without Holt, and to briefly get in the way of Peralta-Santiago (before dying of a heart attack after he caught them making out in the evidence room). He accomplished his role on both fronts, but it felt like more could have been done to differentiate him from a generic terrible boss. 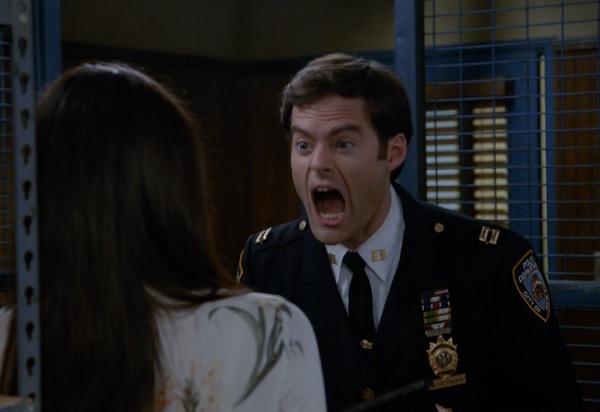 Getting rid of Dozerman this way made sense, though; there didn’t seem to be enough with this character to have him be a multiple-episode adversary, and his death triggered important story beats, such as Peralta and Santiago admitting their relationship to their coworkers and the arrival of “The Vulture” (Dean Winters) as the next new captain. (This coming week’s episode is titled “The Funeral,” too, so we may not have seen the entirety of things related to Dozerman just yet.)

Dozerman’s role here may not have been one of the show’s best moments, but it wasn’t terrible, and as a one-episode thing, it worked out okay. Some shows likely would have built up the first possible new adversary and kept him around for a bit, but the amount of usage Hader got here felt about right. He showed up, we saw what stood out about his character, he moved the plot along and helped draw out the main characters, and then we said goodbye to him. He also got a fantastic dying line, “Tell my wife I love her… work ethic.” Maybe he’d fit in well on the Neutral Planet.

The big question is where Brooklyn Nine-Nine goes from here. Will the show go for more dramatic twists and turns? Will Winters be running the precinct for a while, or are we close to seeing Holt’s triumphant return? Just how will the Peralta-Santiago relationship evolve? And how easy will it be to continue a comedy-first focus amidst all this? We don’t know the answers here, but we did see some promising signs Sunday, and it’s worth remembering the writers’ backgrounds.

Co-creators Dan Goor and Michael Schur were both heavily involved with Parks and Recreation, another show that managed grand plot and relationship twists over time, but one that did so in a way that felt authentic and natural, serving the comedy rather than constraining it. With that previous show, too, they also found ways to avoid many of the big sitcom pitfalls. We’ll see if they can do the same with Brooklyn Nine-Nine, but Sunday’s premiere felt like a possible sign that this show still has its comedic core, and that it can find ways to use plot in service of comedy and character rather than just having twists for the sake of twists. This was just one episode of this new season, and it may not be indicative of what’s to come, but at the very least, it was a good way to start it off.