Brooklyn appears to be hitting theaters at exactly the right time. During the Thanksgiving holiday, many families will be looking for a movie they can see together, probably something with a bit more substance and wider appeal than The Peanuts Movie, The Good Dinosaur or even The Hunger Games: Mockingjay – Part 2.

And with Creed also being released just before everyone breaks for the holiday (except those who, thankfully, work and allow us to shop, dine and seek entertainment), a coming-of-age story and romance provides an excellent alternative to a boxing movie. OK, Creed probably has coming-of-age and romance elements too, but which audience is that movie targeting?

That’s not to say that Brooklyn is a “chick flick” in any way. Yes, it’s the story of a young woman finding her identity, creating a life for herself and deciding where she ultimately belongs. And a love story very much drives the narrative. All of that makes for excellent date-movie material during a holiday weekend. But we’re also at the time of year when the best movies considered for awards and critics’ best-of lists get released. Brooklyn is simply an excellent movie that should appeal to anyone who enjoys watching a well-crafted story, strong directing and fantastic acting.

Based on Colm Tóibín’s 2009 novel and adapted into a movie by Nick Hornby, Brooklyn follows the story of Eilis Lacey (played by Saoirse Ronan), a young woman in the 1950s who really has no future in Ireland beyond working at a general store for a rather mean woman who enjoys belittling her employees and customers, and going to dances with her friends in hopes of meeting a man who can presumably rescue them from a life of spinsterhood.

Yet everyone knows that Eilis is capable of so much more than being a wife and mother. So her older sister, Rose (Fiona Glascott), makes arrangements with a Catholic priest to set up boarding and employment in New York. Eilis’ mother and friends encourage her to go to America, eager to see someone escape Ireland, strike out on her own and make something of herself. As you can imagine, Eilis relishes the opportunity, though she’s obviously terrified of going to a new country where she doesn’t know anyone and wonders if she’ll be able to fulfill everyone’s hopes for her.

After a rough journey to the United States, Eilis has trouble fitting in at her boarding house with three other women who look down on her naive view of the world, dour clothing and lack of social skills. (Eventually, the dinner scenes with the women and their landlady become the most entertaining in the movie.) When she has a breakdown at the department store where she works, her manager calls Father Flood (the wonderful Jim Broadbent), the Catholic priest who got her the job and he gives her the pep talk she needs. Additionally, he enrolls her and pays tuition for night classes to look bookkeeping, the same profession her sister holds back home.

That’s the beginning of Eilis finding her confidence. She’s smarter and more assured than her classmates (all of whom are male), and education serves to affirm her aspirations to support herself and be her own person. Perhaps that also puts her in a better place to be receptive when a young Italian man, Tony (Emory Cohen), makes eyes at her during a local dance. 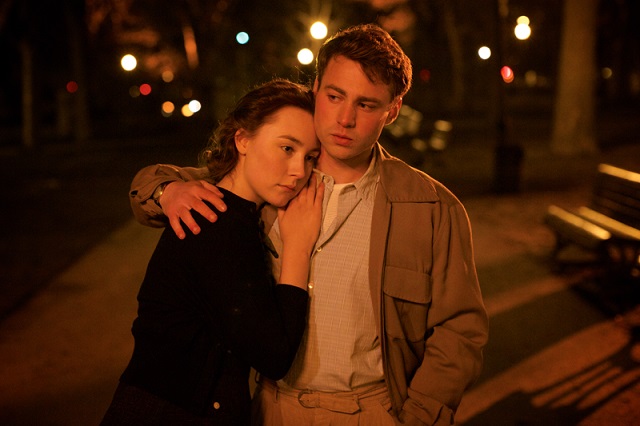 Tony’s presence is funny enough, given that the dance is supposed to be a gathering of Irish men and women. But that suits Tony just fine. (Eilis’ Irish brogue helps.) He goes along easily with Eilis’ insistence that they look like they’re having a good time, so that she can ditch the annoying housemate she accompanied to the dance. Of course, if Tony was simply Eilis’ ticket out of the dance and the two went their separate ways, there wouldn’t be much more to the story.

The young Brooklyn man is intrigued from the start and becomes even more infatuated by Eilis’ assertiveness and ambition. (I was surprised upon realizing that Cohen was the same actor who played Bradley Cooper’s son in The Place Beyond the Pines. In that film, he seemed like a meathead with little acting talent. Here, he’s completely charming.) Yet in something of a twist from a typical love story, it’s the woman who’s reluctant to commit to a life she’s not sure she wants yet.

As the relationship progresses, Tony asks Eilis to come over for dinner and meet his family. It’s a warm, entertaining scene, as Tony’s parents are impressed by Eilis’ skills with eating pasta (thanks to a tutorial from her housemates), while his brothers (especially the eight-year-old) bust his balls about bringing a woman over. But when Tony makes a casual remark about their children growing up to be Dodgers fans, not Yankees fans, you can see ever so slightly in Eilis’ expression and demeanor that she’s not ready to make such a big jump yet.

It’s a subtle, yet effective piece of acting by Ronan and some deft directing by Crowley to cover seven people having a conversation at a dinner table. And in many ways, this scene sets up the main character’s conflict for the rest of the movie. Eilis is comfortable in Brooklyn and with Tony (who has some ambitions of his own), and different people have various ideas about what she could do with her life. Yet with so much ahead of her, she doesn’t want to be trapped, which is why she left Ireland in the first place. Eilis’ inner struggle becomes even more pronounced when news from home demands that she return to see her family. What she chooses next will determine the rest of her life.

Purely as an immigrant story, Brooklyn feels vital to much of what’s going on in our country and the world right now. Our history is built upon people who came to the United States to create a better life for themselves, something I feel is absolutely worth remembering and forms the basis of some of our best literature. But Brooklyn also works as a great romance — and not just between Eilis and Tony, but between Eilis, the woman she becomes and the life she builds for herself. Her growth as a person is a joy to watch, which Ronan’s acting portrays marvelously.

Brooklyn is one of the best movies of the year. I can’t imagine anyone not finding something to like here because the characters are compelling, the writing is witty and sharp (nothing less would be expected from Hornby), and the visuals (notably the use of color) are beautiful. Take a date or significant other to this one. Bring your whole family. Enjoy this, and revel even more when talking about it afterwards because Eilis’ story is our story in so many ways.