It was an announcement that many sensed would be coming eventually, but was still nonetheless surprising when Jon Stewart made it official Tuesday night. After 17 years, Stewart will be leaving The Daily Show, breaking the news at the end of Tuesday’s broadcast. (However, word had begun circulating via social media from those who had attended the show’s live taping.)

There had been quite a bit of speculation that such a decision was imminent for Stewart, who took a three-month hiatus from The Daily Show last summer to direct his first feature film, Rosewater. While his adaptation of Maziar Bahari’s memoir wasn’t likely to be a huge hit, it performed modestly at the box office, which was surely helped by Stewart using his profile — and television show — to promote the movie.

Had Rosewater been a major success, perhaps Stewart would have made this move sooner. (Although he likely would have worked through the end of his contract with Comedy Central, which expires in September.) But critics seemed to like his first effort. In my review, I said Stewart showed major promise as a filmmaker and I was eager to see what he’d do next.

We don’t yet know what Stewart is going to do after he’s done with The Daily Show. Though he expressed a desire to have dinner with his family on a regular basis, it’s entirely plausible that he’s been bitten by the directing bug and wants to pursue that interest. If so, would he continue to develop serious material or might he take a swing at a comedy?

So where does this leave Comedy Central? When I first heard the news of Stewart leaving, two thoughts immediately came to mind.

First, what is John Oliver’s contract situation with HBO? Because he seems like a natural fit to take over The Daily Show, having already been on the show and filling in for Stewart during his Rosewater hiatus. Yet Oliver has clearly established himself as his own man with a distinct voice on Last Week Tonight. Would he want to give up what’s become his signature longform format on a chosen topic each week and go back to quicker bits four nights a week? 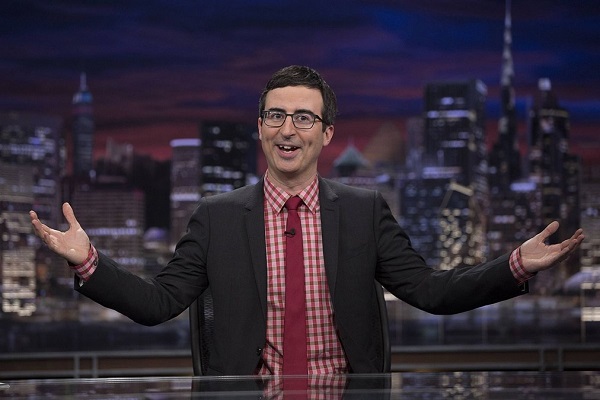 The logistics of Oliver’s contract likely prevent him from returning to Comedy Central as well. Oliver signed a two-year deal with HBO that included a third-year option. It’s possible that the timeline of that contract and Stewart’s exit could line up comfortably, especially if Stewart opts to stay on a bit longer until a suitable replacement is found. But if HBO holds that option, will the network let Oliver walk when Last Week Tonight has been a TV and internet success? Of course, Comedy Central could always make things interesting with the right contract offer.

Secondly, maybe Comedy Central shouldn’t even bother to try and replace Stewart. Anyone who takes over the anchor chair at The Daily Show will almost certainly be viewed as lesser than Stewart or just a replacement at best. Rather than keeping the show alive, risking fans and critics snarking that it’s not as good as it used to be, perhaps the network is better off retiring The Daily Show and trying something different.

However, The Daily Show is simply too big an institution for Comedy Central to put away. Stewart creating what became appointment television and a vital news source for a generation put the cable network on the map, providing credibility that it never had when programming largely consisted of edited movies, syndicated reruns and stand-up specials.

The Daily Show has been a franchise, spinning off two programs in The Colbert Report and The Nightly Show. Not having it in the 11 p.m. time slot would create a major hole in the Comedy Central schedule and make the network far less important to the audience. That’s potentially the beginning of a programming sinkhole that could take years to climb out from. As such, the network sounds as if it fully intends to keep The Daily Show running.

In light of Stewart’s announcement and presuming that Oliver isn’t a replacement option, who should be considered as the next host of The Daily Show? There have been several lists of candidates posted throughout the pop culture internet. Between that and potential actors who could next play Spider-Man, we have plenty of names to scroll through. But I’m going to add to the pile anyway, especially with a few choices that I haven’t seen on some of these lists.

Chris Rock
No, he probably wouldn’t do it — especially if Top Five‘s success enables him to make more movies. But Rock was successful with his HBO talk show years ago, so he’s comfortable with the format. Hiring Rock would also accomplish the objective of adding much needed diversity to what’s been a very white late-night landscape (with the exception of new addition Larry Wilmore). Wouldn’t you want to see Rock commenting on the news of the day and criticizing the media? He’d have fresh material every night.

Tina Fey
Here’s another candidate who might not be interested if her work in movies and TV continues to be lucrative. But Fey has already hosted a version of The Daily Show with her “Weekend Update” gig on Saturday Night Live, and was excellent in the role. You know she would have plenty to say about current events and flawed media coverage. Putting a female in the anchor chair would provide a view that hasn’t been given enough voice in late-night. And there is absolutely no worry as to whether or not Fey would be funny.

Ricky Gervais
I’m guessing Gervais would have little interest in the grind of a doing a show four nights a week. The British TV model of short seasons and limited series runs seem to suit Gervais, who can get in quickly, make his mark and walk out on top. But wouldn’t an outsider’s view of this country’s politics, news media and pop culture feel fresh? (It works for Oliver.) Plus, Gervais so often shows a tendency to say something he shouldn’t, which would make him must-watch TV every night.

W. Kamau Bell
Late-night TV is a worse place for no longer having Totally Biased on FX (later relegated to FXX). Although considering how few people watched that show, it’s questionable as to how many people miss it. But Bell basically hosted a version of The Daily Show here, providing commentary on pertinent news topics while also creating sketches and taped segments. Yet Totally Biased seemed better when it was a weekly program, as opposed to four nights a week, so would the format suit Bell?

Jake Tapper
This might seem an unusual choice, since Tapper actually works in the mainstream news media with The Lead on CNN and was formerly a White House correspondent for ABC News. Perhaps more importantly, he’s not a comedian. But if you follow Tapper on Twitter, you know he can be very funny — something he doesn’t get to show often in his buttoned-up newsman role. The Lead allows him to loosen up a bit and talk about pop culture, but I’ve always gotten the feeling that he’s holding back.