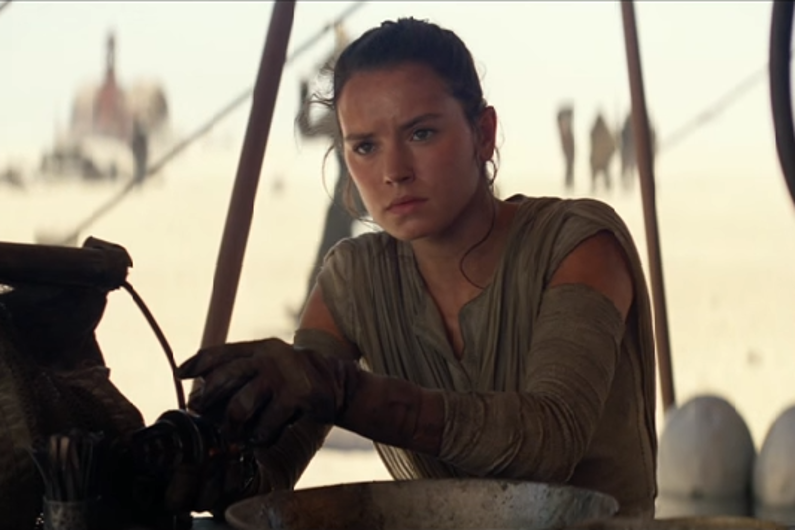 Do you have any predictions/theories about these questions?

Tyler: I have heard a lot about texts in the expanded universe that explain the rise of The First Order, so I don’t have much in terms of theories for that question. But I have thought a lot about Rey’s strong Force abilities without any known training.

My guess is that Luke started training other potential Jedi after he started with Ben Solo/Kylo Ren. We know that he shut down training out of embarrassment once Ben went to the Dark Side and he likely sent the remaining trainees home or back to their parents. My guess is that Rey forgot about her training for one reason or another and the last scene is her reuniting with her former teacher.

Jeremy: I’m convinced Rey is Luke’s daughter. Anakin and Luke’s lightsaber “called” out to her, she seems to be a decent pilot, she’s really good at fixing things (remember Ani made C-3PO), and it would make the focus of each trilogy a different generation of this family tree. Plus, she is already so strong in the Force that having her be just another student, or the daughter of Han and Leia, doesn’t make sense to me.

My theory is that when Kylo Ren turned, Luke was scared for his daughter’s life so he sent her to Jakku, a planet so remote the Millennium Falcon sat unnoticed for years. This might explain why Kylo is interested in a girl helping BB-8 because he knows Luke has a daughter. I can’t wait for Episode VIII to end with Luke saying, “Rey, I am your father.”

Tyler: I really hope Rey isn’t a Skywalker. Kylo Ren as Han and Leia’s son is enough lineage plot for me.

Tim: Rey as Luke’s daughter is the leader in the clubhouse for the backstory fill-in oddsmakers. I don’t automatically think she’s Luke’s daughter, but there’s a good argument to be made that Luke was training her when Kylo killed all his students and sent Rey to a distant planet (Jakku) to keep her in hiding from the First Order. Kylo never recognized her, so that could be something he either forgot in a blind rage or had hidden deep in his conscious that he refused to believe once Rey started fighting back.

I think that Finn’s backstory is actually much more integral to the plot than originally let on, and that his destiny and Phasma’s are somehow intertwined. Hence why she let up so easily when the shields were lowered. Leia’s connection with Rey is also intriguing. There’s something there that makes me think she might actually be LEIA’s daughter, born from some fling after she and Solo split. So there’s your wrench in that theory. 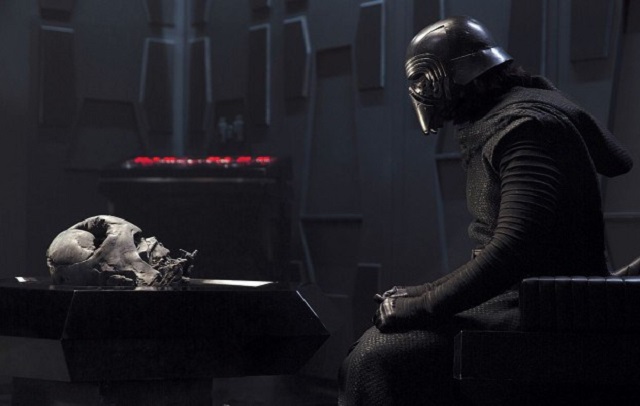 Any closing thoughts? Where does this film rank amongst the franchise for you?

Tyler: As I said, I liked the film quite a lot and would rank it pretty high amongst the films. For me, it would probably be fourth. But after rewatching the originals, I can’t help but wonder that if Jedi wasn’t the finale to two films I love, then I might put The Force Awakens ahead of it, just behind A New Hope and Empire Strikes Back. I have come to terms with the fact that none of the future films will ever top the likes of Empire and A New Hope. I have heard from prequel defenders that kids of a certain age prefer the prequels to the originals and that always bothered me. If a kid told me The Force Awakens was their favorite, I would be more than fine with that.

Jeremy: This was the first movie that my oldest son and I went to in a theater, and as a lifelong Star Wars fan, it will always be a special moment for me. All the memories of seeing Empire and Jedi in the theater (I wasn’t born for A New Hope) with my parents came flooding back, and I was so happy that it had the same feel as the original trilogy that when Luke appeared on screen, tears started streaming down my face. It was really amazing to bring my son (who is already a huge fan) into this epic story that I’ve been connected to for 30-plus years.

Tim: For me, it’s really hard to place because the fact it exists in the first place is a triumph. It’s WAY above the prequel trilogy, but the first stepping stone for me is Jedi, which I hesitate to put above The Force Awakens at this point. It’s in the conversation, though. One thing to keep in mind: Empire and Jedi were able to build a pathos on the original movie, both good and bad. That will be the same for the upcoming movies with Awakens, but at the same time, I’m more than happy enough to see what the other two movies do to amplify this one.

This is an absolute triumph of vision and passion. It’s a true miracle that after so much ill will toward the prequel trilogy, this movie actually exists. That almost puts it in its own special category for me. But for now, it’s got an opportunity to be in that area approaching A New Hope and surpassing Jedi. Somehow, some way, the incredible expectations of the most important movie franchise in history were met. That alone is the best thing I can say about it.