By refusing to emulate last year’s dorm room philosophy seminar of the same name, the opening installment of season two of HBO’s True Detective cemented just how removed the summer’s most anticipated drama is from its counterpart.

The first go-around with True Detective was about creating binaries: Rust Cohle against Martin Hart. Man against woman. Good against evil. And outside of the diegetic world, writer and creator Nic Pizzolatto against director Cary Joji Fukunaga.

The show was certainly elevated by the bright, shiny star of Matthew McConaughey, but it was the cinematic style of Fukunaga that made the show a sweeping hit — a fact that clearly never sat well with Pizzolatto. True Detective reads like the late-night scribbles of an inebriated English major, but coupled with Fukunaga’s mystical portraits of the Bayou, it appeared equally screwy and sophisticated. I, like so many others, ate it up.

In short, yes, I’ll be sticking around for the next seven weeks. But Sunday’s premiere was a bit on the nose. The episode more closely resembled a profanity-laced Law & Order than the mini-series Fukunaga directed last year. 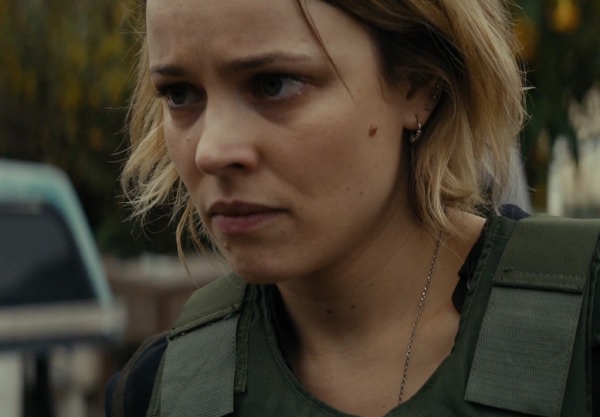 We meet Bezzerides after something went terrible wrong in the bedroom with some nice guy she’s been letting in and out of her apartment. (I’ll stop short of publicly speculating what it was she wanted him to do to her.) Bezzerides violently wears her dissatisfaction over his morning malfunction, asking him to pick up his stuff and get the hell out. She has to go to work.

Work that day is breaking into Athena’s current line of business — she’s a webcam performer — and making an unwarranted sweep of the place. It’s clean. Unamused by the outlet Athena chooses to express herself, Bezzerides dismisses her sister’s sobriety and implies she’s better off turning back to drugs. #toughlove.

McAdams sharing the marquee with Colin Farrell as Detective Ray Velcoro is a step up for True Detective after last year’s, err, questionable commitment to female characters. Bezzerides may be an overcorrection — McAdams is essentially portraying a female Marty Hart, an emotional wreck clinging to an ass-backward philosophy on sex and romance — but seeing a woman’s face growling back at Velcoro and Woodrugh is a pleasant addition to the True Detective universe.

Speaking of Marty Hart, Velcoro definitely channeled his inner Hart during the LeBrons sequence Sunday night. You see, Velcoro was handed the rawest of raw deals: His wife was beaten and raped, and nine months later, their only child was born. His wife subsequently left him — it’s unclear how long after or under what circumstances — and now Velcoro only sees his son, Chad, every other weekend. So when the latest kicks by basketball royalty LeBron James dropped, he had to get them for his pudgy, red-haired little man. Let Velcoro live!

So when Velcoro shakes his son down in front of the school and discovers some kid stole the sneakers — “Aspen? That’s a boy’s name?” — Velcoro does what any alcoholic, ungovernable rogue would do. Velcoro shows up at the boy’s house and pulverizes his father with brass knuckles, all while spraying the 12-year-old with curses and blame. He threatens to kick it up a notch — Mom’s turn! — should Aspen act up again. Farrell gives such a physical performance, like he’s trying to wake up everybody in the house. 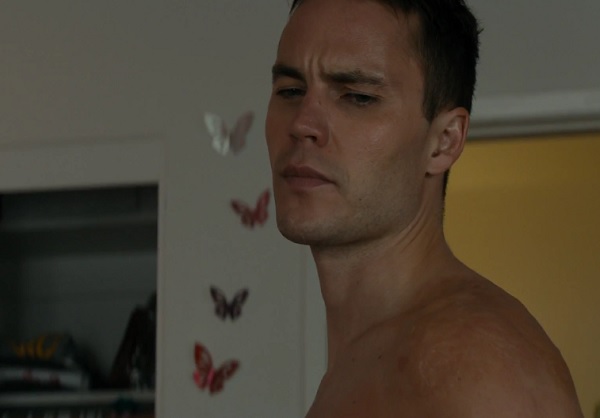 What made Rust Cohle pop off the page was the juxtaposition of his introverted idiosyncrasies with Hart’s manic depression; McConaughey and Woody Harrelson made sweet, sweet music together. Woodrugh has a troubled past worth sharing — his body is covered in colors and scars — but he needs an equal or greater character to pull those stories out of him. Reducing his girlfriend to an exposition factory — lying in bed, she points to one patch of his disfigured flesh and asked what happened — won’t cut it.

This first episode only scratched the surface of Semyon and his wife Jordan (Kelly Reilly). Semyon is the brains behind the business deal for the rail line, only without city manager Ben Casper, he can’t lock it up with investor Osip Agronov, played cooly by Timothy V. Murphy. Nobody has seen Casper in two days, and without him for the big pitch, Semyon is left staring at the goal line without anybody to run it in.

We spent eight hours trying to solve a mystery last season, and the magic of True Detective (or, in Andy Greenwald’s case, the regret) was that we never got any resolution. The grumpy truth of season one was its insistence on simulating life: The show was pretty and disgusting. It was a Chatty Kathy and a Debbie Downer. The show was sometimes cruel and unfair, and sometimes karmically just. 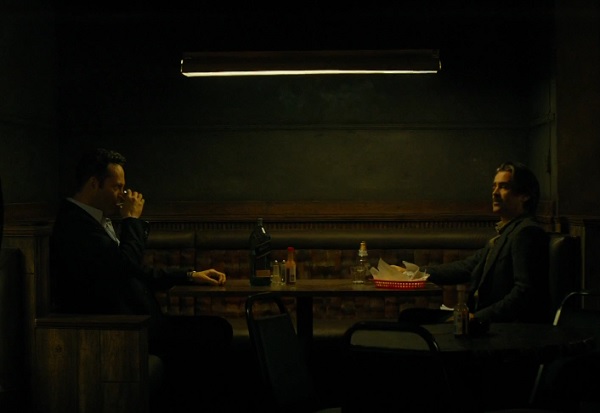 We’d spent all this time watching these two fools search high-and-low for answers, and in the end, the show was completely uninterested in solving a riddle. The show, at its finish, was just like all of us, staring up at the stars hoping to see things a bit more clearly.

As Velcoro, Bezzerides and Woodrugh stand over over Casper’s body, staring at each other in the closing moments of episode one, we get the true difference between season one and two. It harkens back to something Allen Ginsberg apparently told told Bezzerides’ father (played by David Morse)… and it was a gift:

“When you see only with God’s eyes, you see only the truth: You recognize a meaningless universe… Today’s exercise is to recognize the world as meaningless, and to know that God did not make a meaningless world. Hold on to these thoughts. Hold them as both irrefutable and equal. This is how we must live now in the final age of man.”

More dime-store philosophizing? Perhaps. But just as these three detectives sink into their respective nadirs, they all wind up together with what we suspect is the case of their lives. Will this case change them as people for the better, or will it take every last ounce of them, leaving them permanently maimed — or worse — in the process? We’re going to find out over the next seven weeks. And such is the world of True Detective, where mankind is left to work itself out in the post-modern wreckage of this meaningless world.