There have been lots of discussions over the years about the perils and merits of shows that reset everything at the end of each episode, ignoring long-term implications and character growth in favour of a regular status quo. It’s a particularly interesting debate within comedy shows, as some have done very well with extensive use of the reset button and the maintenance of the status quo, including The Simpsons and Seinfeld. But others have also done well with a more fluid situation that’s seen the characters and even the show’s cast change dramatically over time, such as Parks and Recreation, Chuck and Community.

Archer creator Adam Reed and his team have managed something that takes elements from both, though, completely upending the world of the show with a reboot for last year’s season-long “Archer Vice” arc and then restoring most of that world this year for season six.

The debate of static or dynamic status quos can be a polarizing one, and that’s because there are merits to both approaches. Relatively static continuity makes it much easier to watch any episode at any time without seeing the previous ones. That can be something which is very helpful in syndication, and it can also help shows pick up new viewers later in their runs. It also can be beneficial from a comedy sense, allowing writers to focus on jokes over plot, explore the sweet spots they know well and do crazy things (Homer in space! Homer commanding a nuclear sub and firing the captain out of a torpedo tube!) without fear of the long-term repercussions.

Dynamic environments have their own merits, however, allowing writers to mine new comedic turf that comes naturally from the characters’ growth, and allowing the exploration of new kinds of stories. Parks and Recreation’s decision to jump forward in time for its final season was one of the most dramatic examples of this, and one that paid off very well, allowing us to see some of the end results of character evolution (which had been set up well by the way the writers built these characters) without getting there in a tedious manner. The Parks and Rec finale was a tremendous sendoff for the show, and a very funny one, and it largely worked because of the way the writers and actors had grown these characters over the years.

Thus, both extremes can work, and plenty of other shows fall in between, writing in some change and character growth while still keeping much of the show the same. What stands out about Archer is that it managed to have its cake and eat it too, exploring dramatic changes to the show and then reverting to something much closer to the norm, but with some ongoing implications from the changes we saw. It’s an innovative approach, and one that’s worked out very well for the show. 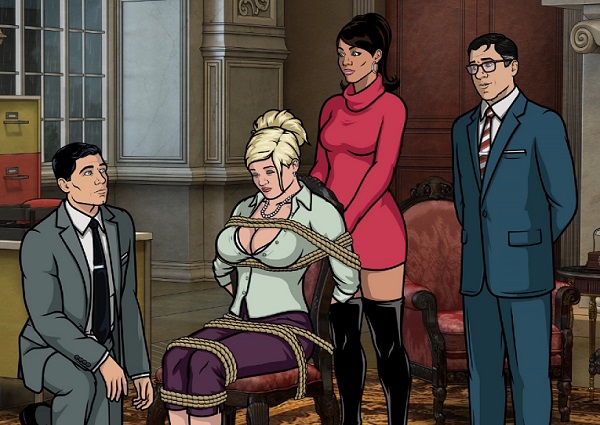 Seen by itself, the “Archer Vice” fifth season might show off the problems with taking dramatic changes too far. Turning ISIS from an American spy agency into a bunch of drug dealers was a radical departure, and it let the show explore plenty of new and hilarious turf that it might not have otherwise, including Pam’s cocaine addiction, Cherlene’s country music career, the “Southbound and Down” Smokey and the Bandit parody, Kenny Loggins’ appearance and more. It also found lots of comedy from throwing these people into unfamiliar situations, including Pam’s deal with the Yakuza, the office drones’ ineptitude in selling off ISIS supplies and Cyril ruling a country.

However, parts of this arc got notably plot-heavy and joke-light (the last four episodes in San Marcos in particular), and the show got a long way from what normally worked for it. It would have been difficult to carry on for another season, which likely played into the “unreboot” at the start of season six.

It’s how season six has unfolded so far that really illustrates the value of using both approaches, though. This season has seen Archer and company in more conventional spy situations (“Three To Tango” has them doing an extraction from Argentina, “The Archer Sanction” has them hunting an assassin in the Alps) and more conventional other situations (“Vision Quest” has them trapped in an elevator, “The Kanes” has Archer visiting Lana’s parents), but it’s taken advantage of the plot developments that happened in season five, most notably Lana’s baby and how Archer feels about parenting (an ongoing evolution that’s still in progress).

The characters’ actions and behaviours during season five aren’t forgotten, either, leading them into an even more uneasy working relationship with the rest of the government and having many of them be even more self-centred than normal. The more standard episodes also feel fresher by comparison after a season that was anything but.

In a world where Archer hit the reset button every episode, it wouldn’t be anywhere as interesting by now, but ongoing “Archer Vice”-style hijinks probably wouldn’t be sustainable either. Instead of meeting in the middle, Reed’s managed to take the best from both extremes. It’s a fascinating approach, and one that’s paid off very well for this show.