I love Dwayne Johnson. I’ll see just about anything he’s in. (Though I’ve somehow managed to avoid the recent Fast and Furious movies and last summer’s Hercules, so I suppose I’m not as dedicated a fan as I believe myself to be.)

As Exhibit A for proof of my devotion, I submit San Andreas. Had anyone else been the star of this disaster flick, I doubt I would have been interested. But San Andreas needs The Rock. The movie needs someone with shoulders wide enough to block out the sun, who looks like he could rescue all of California single-handedly, who stares into the face of cataclysmic destruction and merely raises an eyebrow.

That last part is key. How many current action stars have that kind of on-screen charisma, who can convey the ability to kick major ass, but also be reassuring and calming when everything around him is crumbling to hell? Chris Pratt comes to mind, but he’s not the hulking presence that Johnson is.

Unfortunately, director Brad Peyton doesn’t utilize Johnson’s particular set of skills — which is surprising, since he’s worked with the star before on Journey 2: The Mysterious Island. Maybe that’s not entirely Peyton’s fault, and Carlton Cuse’s screenplay should also be blamed for not letting Johnson shine.

Or it could just be that the digitally rendered spectacle of the earth undulating beneath Los Angeles and San Francisco, of skyscrapers falling apart and tipping over like building blocks that have been stacked too tall, is meant to be the real star of the film and Johnson is supposed to be the lovable, muscular glue tying the action set pieces together. 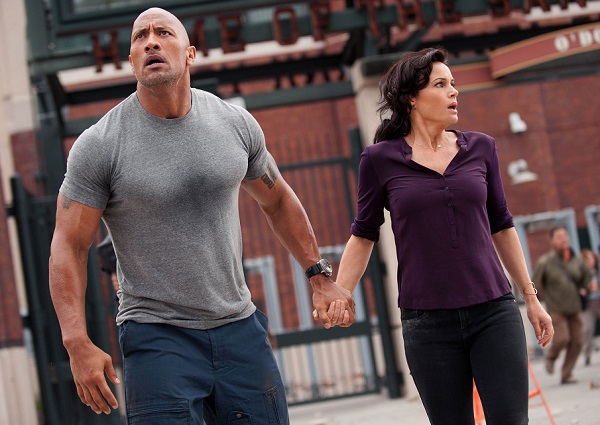 Actually, that’s exactly what the case is. The story devotes considerable time to showing that Johnson’s character is a devoted father and spurned, heartbroken husband. After all, we have to care about these people to follow them for two hours, right? The suspense of narrowly avoiding falling into the earth or being nearly crushed by a crumbling high-rise wouldn’t have much of a thrill if the characters were meaningless.

When it’s established early on that Ray (Johnson) is about to get a divorce from his wife Emma (Carla Gugino), I briefly fantasized about how interesting it would have been if the main character was kind of a dick. Especially if he spends his days rescuing people. I mean, why else would his wife want a divorce, right? Of course, real life and the deterioration of a marriage can be far more complex than that.

But I quickly came to my senses and realized that someone who’s a jerk to his wife wouldn’t be the center of a movie like this. And if she had cheated on him, well, we wouldn’t want Ray to save her, right? As it turns out, Ray is a man in pain (the emotional kind — The Rock doesn’t feel actual pain) and he shut himself off from Emma because of that. I suppose that’s more compelling than Ray just being too damn dedicated to his job that he has no time for his family.

(Dinner was on the stove for five hours! Yeah, you saved those people from that fire, but what about my chicken cacciatore? And your daughter cried herself to sleep waiting for you! I just dropped a plate on the floor and it broke apart, just like our marriage has! When are you going to save us, Ray?)

Yet as much as we’re supposed to sympathize with Ray attempting to rescue his wife, then his daughter, and probably put his family back together in the process, if you really think about it, this chief of the Los Angeles Fire Department search and rescue team suddenly becomes really bad at his job. Ray basically abandons his duty to go save his wife and kid. You know, the unit probably could have used a hand from him — or, like, some leadership — when major metropolitan cities have been completely destroyed by history’s most massive earthquake, injuring and stranding millions of people.

But hey, the man’s daughter is somewhere in that city. And Ray has always taught her how to get to safety, so he’ll eventually find her. Another intriguing direction San Andreas could have taken is if Ray’s daughter, Blake (Alexandra Daddario), had been the main character of the movie, using what her father taught her about search and rescue techniques, tactics and equipment to save both herself and the people around her. 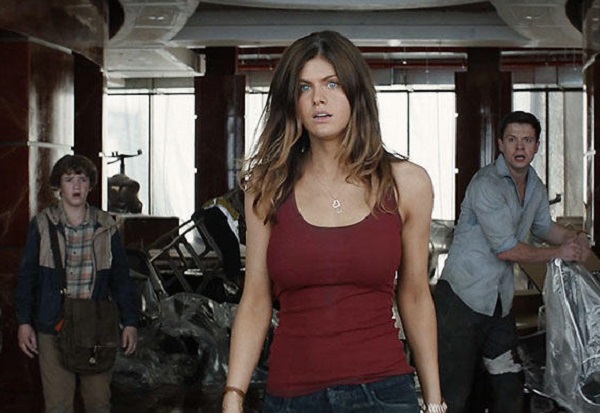 That’s kind of how Blake’s storyline already plays out, but what if her superhero-like daddy had been more in the background, doing his job of saving large numbers of people, while she did what she could on the civilian level and then reunited with her father at the end? Of course, we probably wouldn’t go to the movies to see Daddario rescue people while The Rock was a supporting character.

But you look at Johnson and expect that he’ll do something significantly heroic. Daddario is gorgeous eye candy, yet has shown from her roles in the Percy Jackson series of films that she’s a good actress who can handle action. OK, it also doesn’t hurt that she looks great in a tank-top. The end of San Andreas could have been a competition to show who looks better in a tight t-shirt: Daddario or The Rock. And Johnson has some extremely impressive trapezius muscles and shoulders, so that would be a close contest.

Ultimately, the biggest mistake this movie makes is that it takes itself too seriously and tries to have heart. Yet the amount of destruction and carnage shown on screen is almost comical. People are often running with the ground sinking right behind them. They fall out of holes in the wall and plummet thousands of feet to their deaths. Boulders and rubble the size of houses crush so many poor bastards.

Peyton should have just leaned into the ridiculousness of the spectacle and pushed his movie to go over the top. The CGI disaster is already too much, and the script calls for something new to go wrong every five minutes (usually after a tender moment between Ray and Emma). Also, Dwayne Johnson is the star of your movie. It’s understood that this isn’t going to be a poignant drama. Let him do what he does best, which is do spectacular things, but also make us laugh.

It’s unintentionally funny how calm Ray is amid all of the destruction. Sure, he’s trained to keep a cool head. But the way he frequently makes decisions like, OK, this plane is going to crash and we need to jump out into that fiery pile of rubble that used to be San Francisco is something that could have been done with more of a wink. Because it’s all ridiculous. Embrace that.

Many critics have jokingly expressed disappointment that Johnson doesn’t punch the earthquake. That’s just silly. However, I don’t think it’s unreasonable to have expected The Rock to pull the San Andreas fault back together with his bare hands. And, spoiler alert, that doesn’t happen, which is kind of a letdown.