References can be great, but it’s hard for them to carry a show alone. Fortunately, The Goldbergs doesn’t do that, instead using its endless stream of 1980s pop culture, technology, history and fashion references in service of its central thematic character-based stories. Sometimes, the show goes particularly deep into a certain reference, such as the recreation of Ferris Bueller in “Barry Goldberg’s Day Off.” Other times, references are short and sweet, such as the “Say Anything” boombox in “Happy Mom, Happy Life.”

Wednesday’s Princess Bride-based episode, “As You Wish,” took the middle road, bringing in a wide variety of references to the movie (Vizzini’s plots, Inigo’s revenge-driven swordplay, even the grandpa’s storytelling) without going over the top, and always using them in service of the theme, creating one of the show’s greatest moments so far at the end along the way. As such, it was a particularly poignant illustration of what’s made this show one of the best comedies on TV.

A big part of why The Goldbergs works so well is its setting in time. Having every episode set in the vague “1980-something” (as narrator Patton Oswalt always invokes at the start) may seem confusing at first, but it further enhances the role of the time period in the show. The 80s material is primarily there for thematic comedy, not documentary purposes, so the uncertain time period helps to not have to constantly freeze the show and complain “that wasn’t around yet!” As creator Adam F. Goldberg (yep, not the Saving Private Ryan actor) told Vulture‘s Josef Adalian during the show’s first season in 2013, the uncertain setting lets him work in whatever fits best:

When I shot the pilot, in my head, [the show] was set somewhere in the mid-eighties. Then when we got picked up, and I had to think of new episodes, it came down to what I call the Power Glove Conundrum. To me, the three greatest things of the eighties, in my opinion, happened in ’89: The Reebok Pump, the Nintendo Power Glove, and Say Anything … Even though they just squeaked in under the line in the eighties, to me, personally, they define the eighties. So I was like, “Wait, if my show is set in 1985, I have to wait five years to do these episodes?” I should be so lucky to be five years in on a show. And for now I only have twelve episodes. I kind of realized that the only way to approach it is to not make it Mad Men. And [that show] is brilliant. They’re literally changing haircuts according to the year. But I’m doing a comedy, and I’m doing it from a narrator who’s just like me: When I think, When did I win Legend of Zelda? I don’t remember what year it was. I only remember that it was somewhere in the mid- to late eighties. So the writers started going, “Okay, we have an undependable narrator.” And we played with that: Maybe he’s remembering things wrong, maybe he’s exaggerating. He’s probably mixing up things in the A and B story line. So we decided to set in “1980-something.” He’s literally pulling different memories every episode. And it became so liberating creatively. We could do anything … It’s kind of a melting pot of the eighties. It’s how you remember it.

Expanding the references this show can make is vital, as its references aren’t just “Look what we’re talking about!” They all tend to have an important meaning in the episode, even if it’s not what people might typically think of. For example, a particularly perfect one came in April 1’s “The Adam Bomb,” which used the Cold War as metaphor for the sibling relationship between Barry (Troy Gentile) and Adam (Sean Giambrone) Goldberg, and ended with Barry completely misunderstanding David Hasselhoff’s Berlin Wall concert.

“I saw something today that changed me. David Hasselhoff was on the Great Wall of China in a light-up jacket singing about freedom. And it occurred to me, if Knight Rider can make East and West Russia find common ground, maybe we can too.”

As his grandpa (George Segal) said in response, “While your facts are wildly off, your spirit is right on the money.” That’s a perfect summary of this show; it’s not about a strict chronology or a documentary recreation of the 1980s, but a spirited, character-driven hilarious comedy.

That central concept of the unreliable narrator focusing on his memories also helps explain how the show’s able to work so well thematically. Even by the standards of TV sitcoms, often famed for their lack of change, The Goldbergs‘ episodes tend to be remarkably self-contained, and everything mentioned tends to tie into the particular episode’s theme in one way or another. That makes a lot more sense if these are all stories rather than literal day-by-day accounts.

These stories, which are largely drawn from Goldberg’s own childhood, also make for one of the most remarkable parts of the show; there’s a clip of footage he actually shot of his family during the 80s at the end of every show, and it’s footage that’s been recreated on the show. That adds to the storytelling feel and helps the audience connect to the characters. 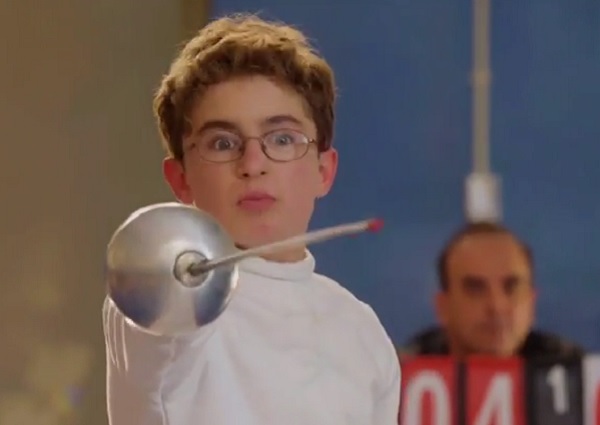 It’s appropriate to discuss The Goldbergs‘ storytelling in the wake of their Princess Bride episode, given that the movie itself was a story-within-a-story and the episode — well, at least the A-story focusing on Adam; the B-story on sister Erica (Hayley Orrantia) and mother Bev (Wendi McLendon-Covey) was more direct — was as well. The episode’s central conceit is that the movie motivates Adam to get some real swords to fight with, so he cons his sports-loving dad Murray (Jeff Garlin) into believing that he wants to go into fencing. There are plenty of great, direct homages used as a result, including the comparison of Adam’s overcomplicated plan to Vizzini’s and Adam’s usage of Inigo’s revenge line to throw his opponent off and score a point.

In the end, though, this isn’t so much a story about Adam’s swords or fencing as it is about father-and-son bonding and the willingness to compromise. Adam continues to try a sport to get closer to his father even after he doesn’t have to anymore; Murray watches Adam’s “dumb movie” and winds up liking it, to the degree where he’s willing to play Fezzik in Adam’s recreation. That’s a huge step forward in their relationship, and it’s reminiscent of the kid in Princess Bride who starts out reluctant to hear his grandpa read to him, but gets completely engrossed in the story by the end. In fact, that may be the biggest Princess Bride reference in this one, never mind the swordplay.

It’s one of the sweetest moments this show’s done (and it’s done plenty), but it’s one that feels earned, and one that was set up thematically and with references while creating plenty of comedy along the way. That’s what we often see from The Goldbergs, and it’s a good reason to tune in even if you’re not in love with the 80s.