The central conceit of The Grinder (Tuesdays, 8:30, Fox) is a TV show where Rob Lowe’s character is a hard-charging lawyer who makes inspiring speeches and brilliant deductions, has a nervous foil who tries to play things by the book, hits on his workplace love interest, and always comes through in the case of the week. That show sounds similar to plenty we’ve seen over the years, and while it could be serviceable and endure for many seasons, it probably wouldn’t be all that interesting.

Here, though, that’s just the meta show-within-the-show, part of a much larger comedy, but one that’s used to great effect as a source of laughter, a way to create plot drama, and a satirical commentary on television itself. That unconventional approach alone might be enough to make The Grinder this fall’s most interesting new comedy, but the incredible execution of it is what makes the show truly hilarious and worth looking forward to each week.

First, let’s get to the actual premise. Lowe plays Dean Sanderson, Jr., a popular actor who returns home to Boise, Idaho after his long-running legal TV show (the show-within-the-show, also titled The Grinder, where his character is also called “The Grinder”) ends. He lives with his brother Stewart (Fred Savage, making a rare return to acting from directing), an actual attorney in the family law firm of Sanderson and Yao. That firm was founded by their father, Dean Sanderson, Sr. (William Devane).

Dean is initially just crashing with Stewart, his wife Debbie (Mary Elizabeth Ellis), and their kids Lizzie and Ethan (Hana Hayes and Connor Kalopsis) while he figures out his next project, much to Stewart’s annoyance, but then he decides he wants to practice actual law (despite not being a lawyer, which irritates Stewart even further). His speeches and TV law prove occasionally useful, though, convincing Dean Sr. to bring him aboard at the firm.

On its own, that could be a pretty funny show. There’s the Odd Couple-style tension between Dean and Stewart, the discrepancies between actual law and TV law, and the comedy from putting a big Hollywood star in a smaller city where everyone wants to meet him (again to Stewart’s chagrin). It’s the show-within-a-show that really elevates this, though. Most episodes feature several clips from the fictional The Grinder, usually introduced thanks to Dean watching reruns with the other Sandersons. (The kids and his dad love it, Debbie likes it at least somewhat, and Stewart hates it.)

Those clips are hilariously over-the-top, and would probably make for a reasonably-humorous show mocking TV procedurals just on their own. But using them sparingly as a part of a larger comedy is perfect, giving some wildly-crazy moments without needing to ground them. The clips are also thematically tied to whatever’s going on in the rest of the show, making it not just a meta experience, but one that enhances rather than detracts, bringing the audience further into the show rather than ruining the immersion.

One of the best examples of this comes in the second episode, “A Hero Has Fallen.” The A-story involves Dean crusading to help a couple fired from their jobs thanks to a no-dating policy, similarly to some of what happened in the clips used within the show. But the B-story’s even better, with Stewart watching the show and realizing “I’m friggin’ Pinkus,” the nerdy by-the-book lawyer who tries to play it safe and hold The Grinder back. This leads to Stewart trying to be more carefree and easygoing with his family, with disastrous results (“[Lizzie’s terrible boyfriend] Zadek is wandering around like a free-range douchebag, and our son fell asleep in his pasta!”), and it’s a terrific integration of the meta elements.

That episode also sees Dean pulling one of his trademarks used in clips from the show, repeatedly asking “But what if it wasn’t?” As he notes, “It’s impossible to argue. You can use it in any situation.” It’s one of the most meme-worthy moments of the show so far, and it also shows how moments from the show-within-the-show can translate into solid jokes for the show itself. 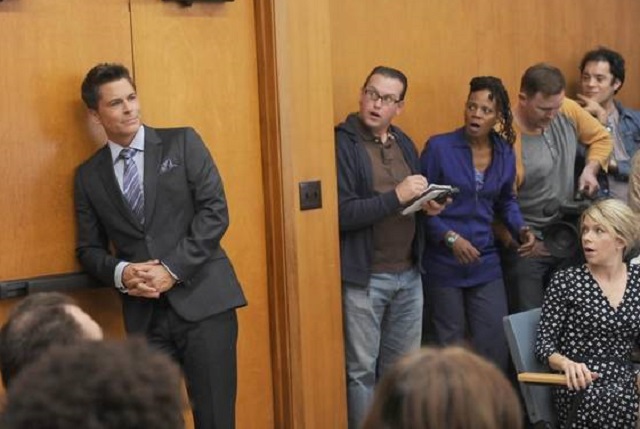 Beyond just working as a way to set up action in the actual show, though, the show-within-a-show also is a funny satirical critique of many television procedurals. From the illegal excesses the characters indulge in (The Grinder in episode three: “I know damn well what the coroner said. I broke into the morgue last night and reperformed the autopsy myself!”) to specific tropes (CSI:Miami‘s sunglasses removal) to Dean’s egotism (“Attention? That’s my worst nightmare. Why do you think I always play other people?”) to his insistence that TV law qualifies him to do actual law (he uses the example of wanting Noah Wyle to perform emergency surgery, and also later says the transition from acting to working in a law firm was “seamless”), there are some great jokes here, and some good points.

The best long-running procedural critique may be how Dean comments on the other people at the firm, seeing them all as characters playing roles similar to the ones on his old show, and seeing himself as still largely acting. This also helps extend the meta element well beyond the clips.

For example, Dean sees new attorney Claire (Natalie Morales, making this a mini-Parks and Recreation reunion!) as his necessary romantic target. (“Workplace love interest? Check.”) He’s hitting on her from the time she first shows up in episode two (as an adversary at a rival firm who later joins Sanderson and Yao), despite her strong resistance; she tells him “There is no chance in hell that you and I are going to happen. It’s impossible,” and he responds with the patented “But what if it wasn’t?” He continues his pursuit of her over the next few episodes with some great self-absorbed monologues (“How can you get someone to like you for you if you don’t even know who you are? I’m talking about me.”) and even a flagrant sweep of papers off her desk (which leads to her telling him to pick them up), and reinforces the trope by muttering “Will they, won’t they” as he exists the room.

Beyond that, his interactions with clumsy firm lawyer Todd (who’s a big fan of The Grinder) further illustrate how he wants to see life as a TV show, explaining Claire’s entrance to Todd by saying “New characters always cause a reshuffle.” The Grinder and all its excesses wasn’t just Dean’s job, but rather seems to be his life; that extension of the meta pays big dividends for the show, and sets up some comedic payoffs that simultaneously get big laughs and deconstruct procedural TV. 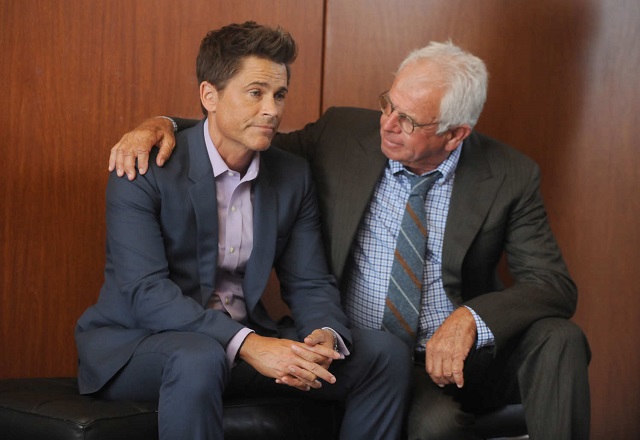 A lot of The Grinder‘s success is thanks to the terrific performance Lowe gives as someone who truly is absorbed in his TV world, but Savage is essential here too as the character outside the meta, the constant refrain that the TV emperor has no clothes. The acting job he does is remarkable, and it might be even harder than what Lowe’s doing here. Savage’s Stewart keeps the show grounded, and expresses credible frustration at how Dean glides through life, but does so in a variety of different ways that don’t feel one-note and manages to get his own comedic moments.

For example, Stewart’s attempt to channel Dean and be all easygoing in the second episode illustrates how he’s not just the wet-blanket Pincus. His pointed snark in the fourth episode at a couple just trying to use him to get to Dean is also great, and shows that Savage is quite capable of drawing laughs too. Savage keeps the show entertainingly ridiculous, not unbelievably ridiculous, and his status as the one character who doesn’t buy into the show-within-a-show helps improve it; viewers can tell that it’s terrible, and his disdain for it (compared to everyone else’s adulation) provides an excellent point of reference.

As overly-the-top insane as the show-within-the-show often is, though, it’s been perfectly utilized so far. In limited doses, it provides huge amounts of laughs, works with each episode’s plot, gives us insight into Dean and snarks away at modern TV procedurals. It’s a meta device that enhances the humor as well as being clever, and it’s one that’s an integral part of The Grinder. Without the show clips, this still might have been a funny show about an actor out of touch with reality, or if the central show was all there was, this could have been a very tedious procedural. Instead, we got something very different, something very funny, and that’s largely thanks to the show-within-the-show. Here’s hoping we get to see much more of The Grinder’s hijinks, and that they continue to elevate The Grinder into one of the best new shows out there.