Well, Netflix did it again. They took one of their most popular shows, House of Cards, and premiered its newest season on a Friday, giving viewers the option of watching the entire season over the weekend so they could take it to the water cooler on Monday. (GChat, water cooler, whatever.)

Season 3 of the series finally sees Francis Underwood in the White House, but the tumultuous journey he took to get to the top of America’s political mountain was nothing compared to fending everyone off who wants his spot. (Be warned. There be spoilers ahead.)

At least, that’s what the season wants you to think. Third seasons for television shows are very popular points for the writing team and production values to hit their respective peaks, but the fun in Frank backstabbing and politicking his way into the most unlikely presidential reign ever was not really there this season. While there is plenty of fat for Kevin Spacey to chew, the problem with him as President is that you don’t really get to see when Frank is at his best. There are galavant steps taken to ensure that Frank’s camera-pandering, snake-charming Southern boy remains as evil as ever, but David Fincher and his team played around too much with Presidential duties to make the season stand out above the freshman and sophomore offerings.

Perhaps the most biting example is with Doug Stamper, played with desire and job-creating initiative by Michael Kelly. Stamper became a casualty of Frank’s plan of getting to the Oval Office, as his desire for Rachel Posner, the woman hired by Underwood to undo Peter Russo in season 1 and give Underwood his path to the vice presidency, became a poisonous addition to his role on Frank’s staff. 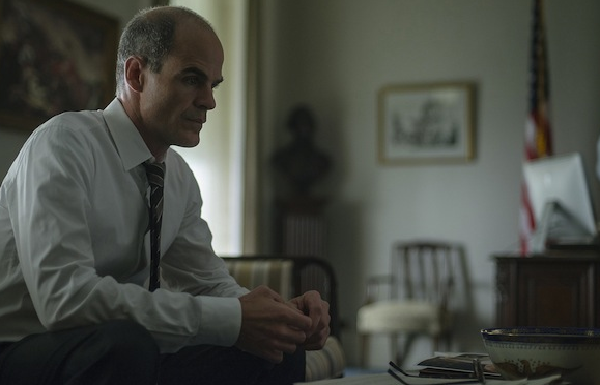 After Posner took a proverbial public bullet for Stamper and Underwood in season 2, she decided to fight back and ran off from Frank’s stalwart sidekick, eventually knocking him unconscious and leaving him for dead. He’s the man that season 3 opens up with, as his rehabilitation from the injuries induced from that attack become the symbol of the sacrifice necessary for Frank’s rise to power.

The idea is obviously that Frank’s insidious behavior leads to consequences for those close to him (the permeating issue of season 3) but the problem with this particular way of writing the show is that while Frank is involved to an extent, he’s not the main man involved.

Obviously, with any television show, the idea is that you write supporting characters in a way to prop up your main character, but with Stamper, it feels more like he’s supposed to be a peer of Frank’s. That’s fine in shows like Breaking Bad, where it’s obvious from the start that Jesse Pinkman is Walter White’s peer and his character gains that notoriety from viewers. But here, Stamper feels forced. His story is right there in front of you; it’s obvious that he wants more than anything to once again be at the President’s side, but it’s a misread to have him step up and be a peer in this show.

By season’s end, you realize why it had to happen and it sets up season 4 where he’ll be Frank’s go-to guy once more. But as well as Kelly played the role, I don’t feel like he should have been as big a focal point as he was this season. His story could have been told from the shadows instead of him constantly trying to take a step into the limelight, even if his character arc is called to do so. 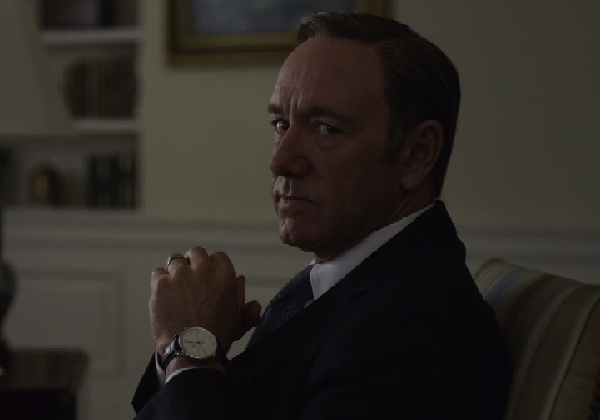 There comes a point in House of Cards — and if you’ve watched all 39 episodes so far, you saw it around the same time as I did early in season 2 — where the series becomes almost painstakingly self-aware. (Most people say the show jumped the shark with Zoe’s death as the shocking element in the season 2 premiere.) The schmaltz of Underwood’s pining for power was undeniably charming. But after a while, his ability to be infallible in almost every situation became almost too much to bear, like Hulk Hogan winning every match he had with the WWF in the 1980’s or Michael Jordan going 6-for-6 in the NBA Finals.

Frank’s initial brush with greatness in season 1 brought the series unbelievable notoriety, but there was almost an onus on the show to “grow up” a bit the further Frank went up the political food chain, considering the enormity of Frank’s new responsibilities. The things that made Frank so charming were eschewed in favor of “character development,” where the more layers of Frank that were pulled off, you were supposed to realize he was indeed a human being underneath all that snark and cynicism.

The problem with that point of view is that Frank is SUPPOSED to be a send-up of political power. He’s a true caricature that represents the evils of what the power-hungry American politician strives for. In his biggest story arc, he goes after unemployment in his usual ruthless way. Assuming 10 million unemployed, Frank took the available funds from the Disaster Relief Fund to employ those without work. And because every senator and representative he faced on the issue opposed him, he decided to make an example of Washington D.C. (and its lack of a state-led government) by teaming with the mayor to get those unemployed to work. And it actually succeeded until an impending natural disaster was threatening to wipe out the money he appropriated. (It should also be noted he appropriated it semi-illegally, because of course it was.)

That type of story was typical Underwood; he had an idea and he was going to make it work regardless of the obstacles in front of him. It behooved him to act that way in making a name for himself, much like he did in education and the Military Sexual Assault bill that was championed by his wife, Claire. 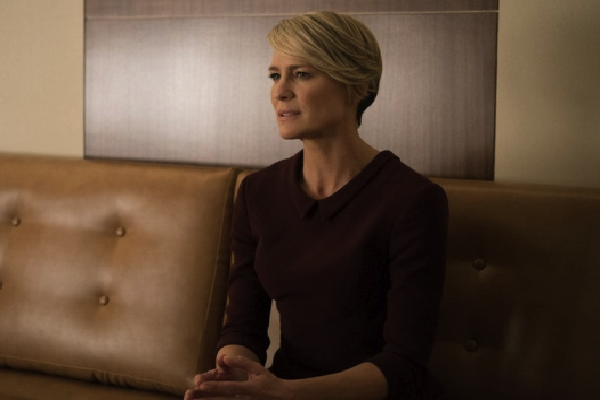 Claire takes on a much greater role in season 3 as the First Lady, and Robin Wright most definitely steps up to the plate with some of her most impressive acting yet in the series. (Wright also directed a couple episodes this season.) Perhaps the most intriguing portion of this season is Claire being the person fighting most of Frank’s international battles, thanks to her appointment as the U.S. representative to the United Nations. Claire was granted the spot by Frank after she was shot down in Congress by a close vote, leading the nepotism to run rampant in Frank’s dealings with Russia.

Beginning with a state visit to the White House, Lars Mikkelsen’s President Viktor Petrov shows interest in Claire from the beginning, going so far as to finish a Russian traditional dance with a kiss in front of Frank and their guests. It’s only the beginning, as Petrov had determined Claire’s weakness as an international bureaucrat and exploits it multiple times over the course of the season. (I’d be remiss in not mentioning the cameo by Pussy Riot, who got a chance to play themselves as revolutionary upstarts and perform a music video over the end credits in “Chapter 29.”)

But it’s the way the season ends that shows a completely different tone for the show going forward. In the first two seasons, Frank’s underhanded victories are canonized and become bookends on the stories written about his steps to the top. But this season ends with a pyrrhic victory, as Doug finally disposes of Rachel and Frank wins the Iowa caucus.

However, the final scene is of Claire walking out on Frank after both her forced resignation at the U.N. and Frank physically threatening her about her place in their marriage. Never before has a United States president in the modern age gone as a true bachelor, but the end of season 3 shows that Frank will have to at least consider it. More importantly, it shows that for the first time in a long time, the chinks in Frank’s armor are starting to become more prominent. The AmWorks bill was shot down in anticipation of the hurricane, his relationship with Russia and his country’s standing in the Middle East was being questioned. By the end, the only person that is truly by his side is Doug, who went to extreme lengths to make himself a part of Frank’s inner circle once more. 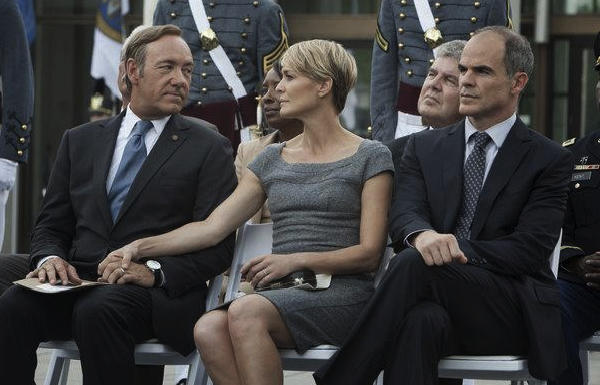 Even if they weren’t intentional, the nods to Breaking Bad in the season finale were a nice touch as Doug traveled to Santa Fe. A look to the sky sees two planes crossing high overhead, alluding to the plane crash that ended season 2 in Bad, and once Doug finds Rachel (after really taking it to Gavin upon finding out the hacker escaped to Caracas and lied to him about her death), a long drive into the middle of the desert leads to a dastardly burial deed. This time, instead of giant tubs of money being buried, it’s Rachel, but not before Doug really goes the extra mile in making you think he had a change of heart.

(Quick note about that scene: The way it’s implied, Doug didn’t necessarily bury her because of the orders from Frank insomuch as it was because she was no longer Rachel after changing her identity and because she screwed him over after he had feelings for her. Now THAT is cold blooded. He and Frank deserve each other.)

We’re now two years into the great Netflix television series experiment with House of Cards, and the big question has always been whether or not there’s staying power for the show after the viewer consumes it and moves on. Season 1 was an incredible barrage of soapy pulp, with Frank’s debonair anti-hero shining bright amongst the other television giants, but Season 2 saw the show give in to a necessity to grow up a bit, which undercut its growth, ironically. With Season 3, it seems like the game Frank loves to play won’t stick in the White House, and the question now becomes how quickly his downfall will progress.

Season 4 will obviously show his run for re-election, but the question is whether or not Netflix will ask Fincher to extend that downfall another season or two, a task that became quite the burden for shows like The Sopranos or Mad Men, whose natural progressions tended to be on the shorter side, yet popularity told the networks otherwise. It almost seems like there’s not much else the series can do with Frank, and if we’ve indeed hit the peak of what his undeniably evil tendencies can bring, then it’s without much doubt at all that the man who actually pissed on his father’s grave ranks amongst the pantheon of evil greats on the Silver Screen. The question is whether or not his downfall will be nearly as entertaining as his rise.