Fall is right around the corner. Fall beers fill store shelves, Halloween and Thanksgiving are fast approaching and my favorite form of casualwear — jeans and a hoodie — is socially acceptable. It also means that football season is here.

That doesn’t just mean watching my Hawkeyes and Bears every Saturday and Sunday. It’s planning 11 a.m. trips to sports bars, road trips to the college stadiums in the middle of nowhere, and adjusting fantasy lineups — all of which border on clinical obsession. Based on the attention and cash paid to the NCAA and NFL, I know I’m not the only American who spends half their year this way and I’m also sure many of them feel as guilty about it as I do.

Heading into this season, public opinion on the NFL and NCAA football is at an all-time low.

Last year, the NFL faced a number of PR nightmares with video of now-former Ravens running back Ray Rice punching out his wife and dragging her out of a casino elevator surfacing. Before those images leaked, the NFL saw fit to only suspend Rice for two games. But once the video footage was released, he was suspended and released by the Ravens. Greg Hardy and Ray McDonald faced similar charges and Minnesota Vikings running back Adrian Peterson was suspended all of last year after abusing his son. Many blame NFL Commissioner Roger Goodell for treating those situations as PR issues, rather than human concerns. 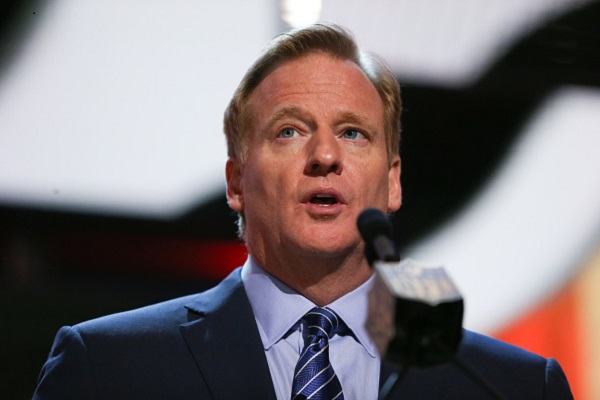 CHICAGO, IL – APRIL 30: NFL Commissioner Roger Goodell announces that Marcus Peters of the Washington Huskies was picked #18 overall by the Kansas City Chiefs during the first round of the 2015 NFL Draft at the Auditorium Theatre of Roosevelt University on April 30, 2015 in Chicago, Illinois. (Photo by Jonathan Daniel/Getty Images)

Equally controversial, the NCAA, college conferences and individual schools have been under close examination for generating billions of dollars in revenue, while the players see little money beyond their scholarships and a meal stipend. (Few of those scholarships are fulfilled through four years, as players leave school early to join the professional ranks.)

Finally, there’s also the risk of injury which has led to some frightening results as multiple players have suffered memory loss, brain damage and even depression, leading some to commit suicide. Despite all of this, football and the two largest organizations for which the game is played are at an all-time high in terms of popularity and profits.

In a world where money speaks louder than any tweet or Facebook post, I’m usually a strong proponent of consumers voting with their wallets. When possible, I’ve stayed clear of movies, TV shows, video games and websites when I feel they aren’t delivering the right product. Yet here I am listening to fantasy football podcasts in preparation after three drafts, buying new Bears and Hawkeye hats, and seeing if I can plan a weekend during which I see Iowa play Northwestern and make a trip to Detroit to see the Bears in the same weekend.

Yet if any other of my hobbies were tied to the types of offenses mentioned above, I would make significant changes in my habits. Call me a hypocrite if you want, but by that standard, America is full of such people. That doesn’t exonerate us but that fact speaks to the power of the game when it’s played at the highest level as we continue to hand over our money, directly and indirectly, making the game a billion dollar industry.

The most hardcore sports nerds — I mean “fans” — rival those of movies, comic books, video games and music. which can bring out the best and worst in people. We love being part of something larger than ourselves and with four major U.S. sports, we have a lot of options for community celebration. This often allows for Rashomon-like conversations where we share where we were when x-event happened and what we did to either celebrate victories or wallow in defeat.

The commercial embedded above is an example of the height of that joy. Along with the joy of victory, there’s nearly as much to be had in sharing in the misery of defeat, whether it’s at the game, a sports bar or a friend’s apartment.

Fantastic human interest stories often surround sports as well, whether it’s the exaggerated story in Rudy, Michael Jordan’s “Flu Game,” or even Brett Favre passing for 399 yards and four touchdowns on Monday Night Football one day after his father’s passing. The drama from the games can be equally as compelling. I’ll never forget watching Vince Young and the Texas Longhorns taking down top-ranked USC in the 2006 BCS championship game or knowing that every week, Friday Night Lights would give me that feeling. The opening prologue to this year’s Madden NFL 16 perfectly captures that feeling.

The first college football game dates back to 1869 and while none of today’s fans remember that season, football is steeped in our cultural traditions. Part of this is because the American brand of the game is exclusive to North America. Baseball might have the “American Pastime” title, but there’s no question that football is the game with which our country identifies.

This season, the NFL will hold Super Bowl 50 and throughout the season, we can expect to see even more NFL Films highlights than in a normal season. While this is largely due to the league’s desire to emphasize its rich history, we still eat it up because it gives our dedication meaning. Football feels important when it’s really just a game that’s insignificant compared to the issues many people have with it right now.

Despite all those reasons I love the game, poor player behavior, even worse management from NFL officials, and player exploitation in college all stick in the back of my mind. Yet there are no signs of fans slowing down. And judging by the constantly rising revenue for the NFL and NCAA, that’s not changing anytime soon. If the events of last season weren’t enough to lose fans, it looks like anything short of mass genocide is fair game. I hope both organizations do what they can to make up for their transgressions, even though fans — including this one —have made it clear that such measures aren’t necessary.