After last week’s very good but only slightly funny episode with Margaret Cho, Jerry Seinfeld might have opted for a punchline-heavy guest as a follow-up. Instead, Judd Apatow gave us a sadder episode that focused heavily on the late Garry Shandling. While Comedians in Cars Getting Coffee might not be the perfect medium for a eulogy, it was okay here. The episode didn’t reach the intensities of last week, as Apatow felt like a “safe” guest without much fanfare.

I did not see who this week’s guest was prior to the episode. So my first hint as to who might join Jerry was the car. I expected a guest to match the Solar Red 1968 Firebird 400. Seinfeld described the car as “the most powerful Firebird you could buy in 1968,” which made me think that the guest would be a hot-shot Alec Baldwin-type.

Turns out, it was a bait-and-switch. Seinfeld argues that because Judd Apatow didn’t have this type of car growing up, he became the comedy genius we know. Even the Escape from Syosset! parody described in the intro was never followed up. Just like the car, it showed a lot of promise (great photos and graphics) but didn’t fit the rest of the episode. It’s like having a thesis/introduction paragraph to an essay that doesn’t match the body and evidence.

Even the humorous moments disappointed as arguably the funniest moment was the call between Seinfeld and Apatow. Between a joke about pronouncing Apatow’s name and the guest wanting a cheeseburger and milkshake for breakfast, I truly thought this episode would be better than last week’s.

When Seinfeld picked up Apatow, they had a nice moment going through Garry Shandling’s things. The late comedian was a legend who clearly inspired both men. Among the old photos in Apatow’s messy office was a photograph of him with Seinfeld. Both men had a lot more hair, so it must have been taken years ago. Holding the photo and making the same faces was a nice moment.

The car segment had a couple of neat stories, including one that made me chuckle. The first was Apatow talking about returning to performing stand-up regularly. The e-mail from Louis C.K. about what to do on The Tonight Show, as was the short clip from his set. Then came talk of how his mother would rather have a Mercedes-Benz because it is a status symbol and how she’s “not an animal.”

As they walked into The 101 Coffee Shop, the comedians talked more about Shandling. Then they sat down for a breakfast of cheeseburgers, fries and milkshakes. Seinfeld was pretty judgmental of what Apatow considers breakfast. Personally, I am on Apatow’s side. Just this week, I had leftover pizza for breakfast, so I see no problem with having a cheeseburger and shake.

During the meal, there were shots of the burgers being made in lieu of tons of coffee footage. That was a nice touch, although it was evened out by a distracting amount of background noise in the diner. I assume a microphone broke or ran out of power in the diner because this was not an issue in the car, despite it being a convertible. At least the conversation was still audible despite the chatter around them. 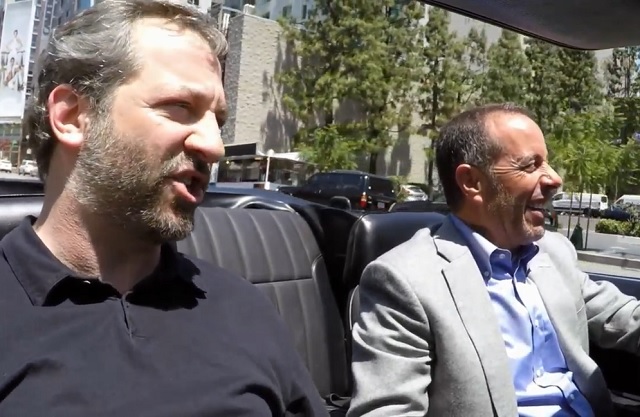 Apatow talked about how he isn’t recognized in public. I find that surprising, especially as he continues to make great work. But he’s very fortunate as someone who can be a big celebrity without being forced into the TMZ treatment everywhere he goes.

What could change this semi-hidden identity is his stand-up career. He’s doing more comedy and admitted he missed the interactions with fellow performers that come with the medium. Apparently, that’s why he got back into it after 22 years off. The more people that see Apatow’s face, the more recognizable he’ll become. Unless he wants the attention, maybe Apatow should just make jokes for his friends.

Apatow also admitted he considered Freaks and Geeks the pinnacle of his career and that everything else was the cherry on top. If that’s how he views things, then he’s had a lot of cherries! This topic also led to the best exchange of the episode:

Apatow: Nothing else matters. I can experiment. I can do anything because I did what I wanted to do perfectly once.

Seinfeld: That is very healthy. I don’t think you need to go to the shrink anymore.

Apatow finishes the bit by sucking on the straw of his chocolate milkshake and smiling like a naive adolescent.

The conversation shifted back to Garry Shandling once again, this time honoring how funny he was and how much he is missed. I am not one to judge how people should grieve, but I think the Shandling moments might have been better off spliced together instead of peppered within the episode. 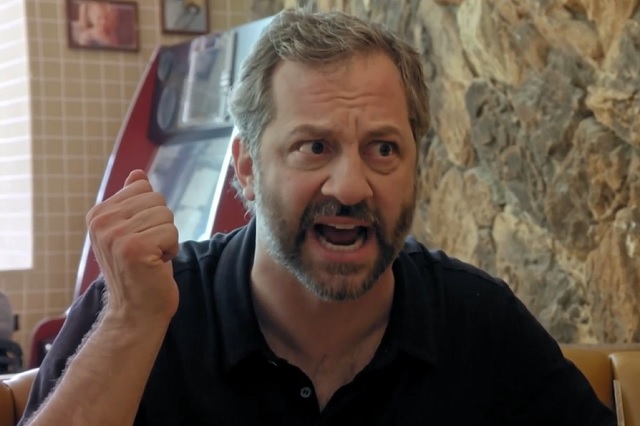 The diner segment ended stronger (and funnier) between Apatow talking about his kids, Seinfeld’s riff about sounds similar to sex, and Apatow and a friend seeing Frank Sinatra and Don Rickles using mushrooms. It was a great way to explain his addictive personality while still making it funny.

Aside from the Acura product placement, the episode ended with an abrupt whimper. With such a focus on the diner, the return car ride only spanned about 90 seconds. Sure, the stories were nice, but they came too late for any follow-up. Seinfeld should have circled the block and had Apatow talk more about his family and this experience in the comedy club.

After last week’s episode of extremes, this week’s Comedians in Cars proved to be significantly more mellow. Unfortunately, the mellowness led to a lack of anything memorable in the episode. There were a few chuckle-worthy moments that saved the episode from being outrightly bad, but the car was deceiving and the introduction misleading. I can’t imagine even the biggest Judd Apatow fans would find this entertaining. They’d be better off watching one of his movies on Netflix. 5/10

[You can read Alex’s other recaps of Comedians in Cars here and his recap of the Garry Shandling episode here.]