Hard to believe season eight of Comedians in Cars Getting Coffee is almost over. Last week saw a very upbeat comedian, J.B. Smoove, tone it down with Jerry. This week saw a much more subdued personality — Saturday Night Live creator Lorne Michaels — on the show. And while he was by no means energetic, Michaels was one of the best guests in Comedians in Cars‘ history.

Because Saturday Night Live is one of the most influential shows in the history of television, the homages were going to fit in somewhere. They started early, with a saxophone-heavy remix of the usual introduction music. All that was missing was Darrell Hammond dubbing the intro instead of Jerry Seinfeld, but it was still a proper salute to Michaels’ legacy.

The white 1955 Mercedes-Benz 300 SL was a neat car, with its gullwing doors and low frame, but it also made me scratch my head. Why would Seinfeld force a 71-year-old guest into a car that is so difficult to get in and out of?

It doesn’t even matter because Lorne Michaels can make anything and everything funny. It started when Seinfeld picked up his guest.

“Thank you for doing this,” Seinfeld said.

“Are you really?” Seinfeld asks.

That bit is so simple, yet so timeless, kind of like Michaels himself. It’s as if they were reading from a script. Knowing they weren’t, this is the first instance that made me think Michaels might actually be Seinfeld’s father.

The next one came during the car ride, as they talk about the importance of an audience to their preferred type of comedy. Saturday Night Live tapes in front of a studio audience, while Seinfeld is addicted to stand-up comedy and had a live audience for his sitcom. Both men are energized by a great reaction and fascinated by a poor one because it keeps them honest.

“Comedians trust the sound of things,” Michaels says. Thinking about that idea makes plenty of sense. The best stand-up specials do not need a visual to be successful. Comedy albums exist for a reason.

Later during the car portion, Michaels tells a fantastic story about John Belushi being let on the White House grounds even though he did not carry his ID. “That’s 1976,” Michaels says. “It’s not that way anymore.” Makes me think of when President Obama was on Comedians in Cars and they couldn’t even leave the property!

And then comes another moment to add to my “Lorne Michaels is Jerry Seinfeld’s real father” conspiracy theory. As they are pulling up to park, Michaels gives Seinfeld an interview question.

“Let me ask you why you decided to do this show this way,” Michaels says.

“Tell me about it,” said Michaels.

If they’re not related, they’re definitely cut from the same cloth as comedians.

The restaurant portion, at New York City’s The Monkey Bar, was both the darkest and fanciest restaurant in the show’s history. There were white tablecloths, candles and vases on the table, and mood lighting meant for patrons, not a film crew. That said, I think the choice to keep the shot dark instead of using tons of light made sense. It made the conversation more intimate and private. I felt like a fly on the wall. 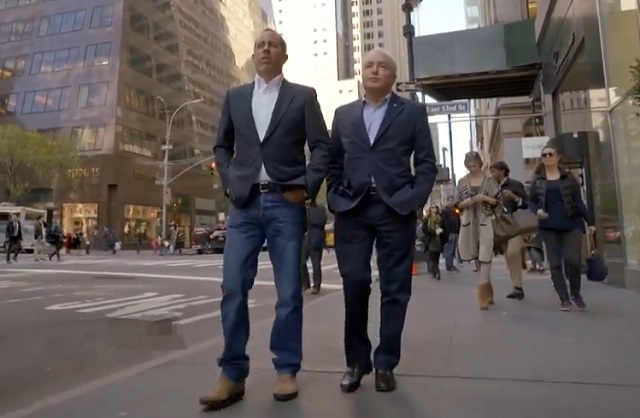 If you’re an SNL fan, even for a few comedians in the show’s illustrious timeline, you’ll find it fascinating hearing Michaels’ thoughts on former cast members like Chris Farley and Jimmy Fallon.

The Fallon chat devolves into Michaels thinking 1990s-era Jerry Seinfeld could have hosted a talk show. Then the chair is yanked from under him. “I mean, it might not have been a hit,” Michaels says. “but you could have done it.” That’s a great punchline.

A lot of the restaurant segment was cut to feature only Lorne’s quotes. He has a lot of wisdom and great lines that easily stand on their own. Conversation can be a crutch in Comedians in Cars as Seinfeld tries to set up a guest. Lorne Michaels makes comedy look effortless. In this regard, he and Seinfeld are complete opposites. While Michaels has one-liners that come naturally, Seinfeld tries to mine the best bit possible. Michaels’ own adage about comedians is that “you can’t tell when they’re working.” I think that applies to every comedian, except Jerry Seinfeld, who works extremely hard and gets great results, but he doesn’t make it look easy.

The zoo metaphor is fascinating about lions and bears. It was another metaphor that made me think. I’m from Cleveland. At the Cleveland Metroparks Zoo, the flamingos are situated right next to the food court. Who are the flamingos in this situation? And does the metaphor’s meaning change when you realize they were eating at The Monkey Bar?

But back to my conspiracy theory. Toward the end of the episode, Seinfeld and Michaels walk together, in rhythm. They’re even dressed the same and have their hands in pockets! It’s like one of those fake mirror bits. 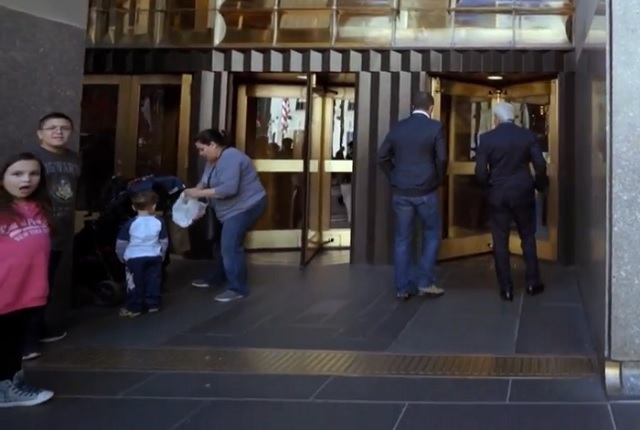 I can’t comprehend how a mob of people wasn’t watching Michaels and Seinfeld walk through New York City together. Granted, as they walk into 30 Rock, there is a priceless reaction of a young girl on the left side of the screen (14:29 mark). I don’t know when this episode was taped, but I’m guessing that she still hasn’t been able to pick her jaw up off the ground.

Upon entering the building, they point out this bizarre mural of NBC legends. The more I stare at that mural, the weirder it looks.

30 Rock is home to everything NBC, so, they had to stop by The Tonight Show with Jimmy Fallon. Afterward, they ran into Julia Louis-Dreyfus en route to Michaels’ office. Relating it back to the zoo bit, it’s as if Michaels was escorted back to his exhibit after one of those animal demonstration shows. While I would have liked to learn about all of the knick-knacks Michaels has collected over the years, it would have turned the episode into a 90-minute special.

For some reason, guests that are similar to Jerry Seinfeld typically make for subpar episodes of Comedians in Cars Getting Coffee. Lorne Michaels was so similar that Seinfeld should have called him “Dad.” They played off each other well and there was never a truly dull moment. No doubt, this is the best episode since I started reviewing the show in season six. Everyone involved should be proud of this masterpiece. 10/10