If you wondered what The Daily Show would look like had Comedy Central chosen correspondent Samantha Bee to replace Jon Stewart, Bee showed us with the debut of her new show Full Frontal Monday night on TBS. (Whether or not Bee is doing a better Daily Show than Trevor Noah is something we’ll be able to judge in the weeks to come, especially through election season.)

After TBS announced that it signed Bee to develop a late-night show, the question was what format the program would take. Would it be a faux newscast like The Daily Show? Would there be more taped segments or any sort of sketch comedy, as John Oliver is doing with Last Week Tonight? Would it follow the traditional late-night format of monologue, comedy bit, celebrity interview, then musical guest?

Perhaps it was silly to think that Bee would veer from her lane in any way. She achieved notoriety as a Daily Show correspondent and is obviously comfortable commenting on politics and current events. Smartly, Bee is sticking to what she’s good at and not trying too hard to provide anything different. Maybe she’ll take a few more chances in future shows, but for Monday’s debut, Bee relished the chance to take a few swings at the Republican and Democratic presidential races after sitting on the sidelines for months. 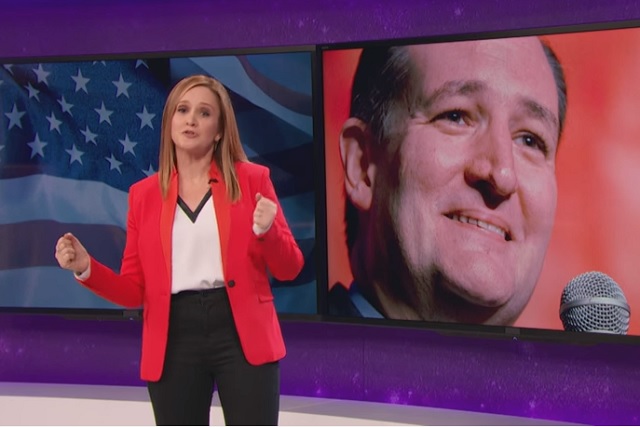 Objectivity? No, thanks. Bee made it quite clear how she feels about Senator Ted Cruz, calling him a “fist-faced, horseshit salesman.” That doesn’t leave much room for nuance. Reminding us that she was just as sharp a media critic as comedic political pundit on The Daily Show, Bee then punctured the narrative that Cruz was the GOP front-runner following his victory in the Iowa Caucus, pointing out how far behind polls have him in New Hampshire and how disliked he is by, well, everyone.

On the other side of the Republican spectrum is Jeb Bush, who once seemed like the presidency would be anointed to him. As those who follow politics — and even those who don’t know — the GOP race has not gone that way for him. Bush looks miserable, having to trade barbs in the press and among voters with Donald Trump, and his lack of charisma or energy has failed to engage voters. He’s the perfect subject for a somber, Werner Herzog-style documentary, which is what Full Frontal gave us.

In her sharpest segment of the evening, Bee singled out Kansas State Senator Mitch Holmes for wasting his elected position and taxpayer dollars on legislation motivated by his obvious dislike for women, such as a Senate dress code and frequent attempts to limit abortion. Never mind that his state has the nation’s highest food tax and a significant budget shortfall. Bee probably could not have had more fun ripping Holmes to shreds.

Like Oliver, Bee clearly enjoys having her own voice on her own platform, rather than playing a supporting role on a show that she’d outgrown. It would have been nice for her to succeed Stewart, especially because late-night TV is such a boys’ club — which Bee addressed head-on in the first segment of Monday’s premiere, as well as the silly questions that came with her breakthrough — but Bee is surely fortunate that she doesn’t have to sit at the Daily Show anchor desk and gets to do her own thing instead.

Of course, it isn’t fair to grade Bee after only one show, but Full Frontal had a strong debut. This is the show Bee has been waiting for and TBS appears to know exactly what sort of talent it has. As she becomes more comfortable and assured on her own stage (she’s literally on a stage, rather than behind a desk, virtually performing for a studio audience and cameras), we’ll see if Full Frontal develops any distinctions, such as Last Week Tonight has with its longform segments on specific subjects that aren’t receiving deeper coverage in the news. But that’s John Oliver’s thing.

Samantha Bee will have her thing. Maybe it will be striking back at the hypocrisy and anti-female sentiment within politics and throughout society. And that wouldn’t be a bad thing at all. Narrow-minded media sticking to a narrative have tried to put Bee in a box and make her the presumed spokeswoman for women in late-night comedy. Perhaps that’s a role Bee wouldn’t mind fulfilling. More importantly, she seems far more interested in providing a new voice. As crowded as the late-night landscape is, there’s still plenty of room for her and Bee looks ready to carve out her own space. If only TBS let her have that space more than once a week.