Actors playing fictional versions of themselves can often make for interesting television, as we’ve seen with everything from Seinfeld to Curb Your Enthusiasm to Louie to The Jim Gaffigan Show offering something along those lines.

But Alan Tudyk’s Con Man takes it in a new direction.  It provides a fascinating look at some elements of life (and especially conventions) for actors like Tudyk who became sci-fi stars, and gets incredibly meta at times, but the fictionalization and the light-hearted approach means that this is a very funny show first and foremost.

The series, which airs on subscription streaming channel Comic-Con HQ and is currently in its second season, is created, written, directed by and starring Tudyk, who plays Wray Nerely, an actor who was the pilot on canceled sci-fi show Spectrum. If you’re thinking that sounds like Firefly, it’s pretty much exactly that.

The show within the show bears plenty of similarities, especially when it comes to Tudyk’s interactions with other members of that fictional cast, including Jack Moore (Nathan Fillion, who’s also a producer on Con Man). The Con Man plot also involves plans for a Spectrum movie, which will be familiar to those who followed the saga of getting Serenity made. As previously mentioned, though, this show’s much more about using that setup for humor than a documentary look, and it produces some hilarious moments as a result. 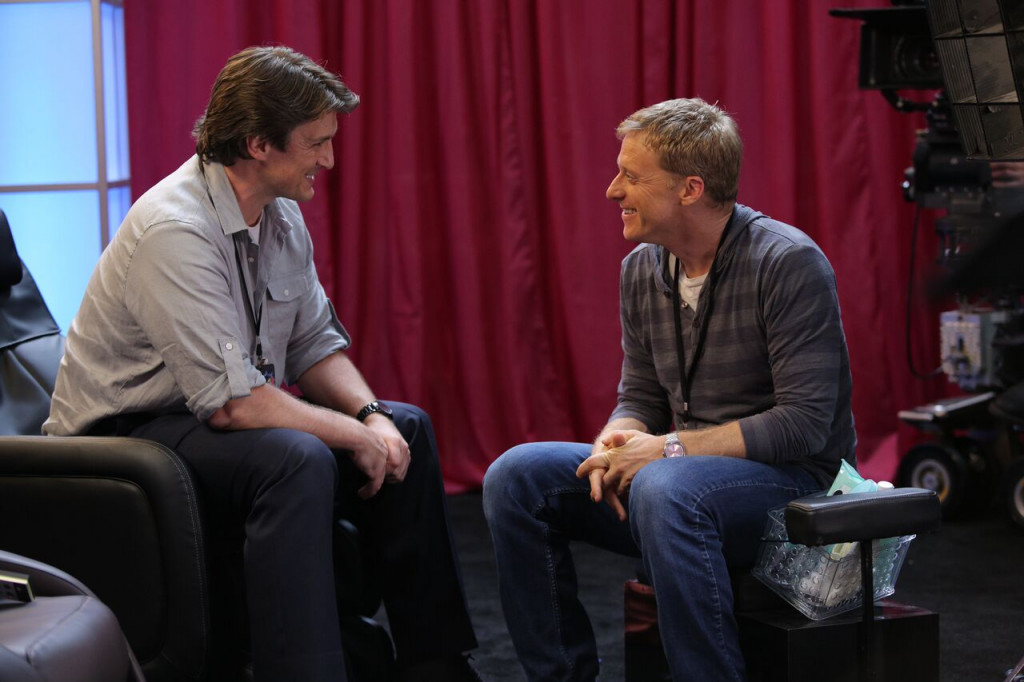 The overarching plot of the series is that Nerely isn’t happy with his sci-fi success and is constantly looking for more and bigger roles away from the sci-fi world. That leads to plenty of conflict at the various conventions he goes to, but this is handled well. The show doesn’t really fall into too many stereotypes about fans, but is rather focused on Nerely’s internal struggles and his encounters with the wide variety of characters who run or otherwise populate the con world.

Con Man does a great job of using guest stars both in cameo roles and as versions of themselves (Sean Astin was a highlight of season one, while Lou Ferrigno is fantastic in season two), and it also nicely draws its absurdly funny regulars, from Moore, his toupee and his action hero stardom to Mindy Sterling as Bobbie, Nerely’s booking agent with a high sex drive. 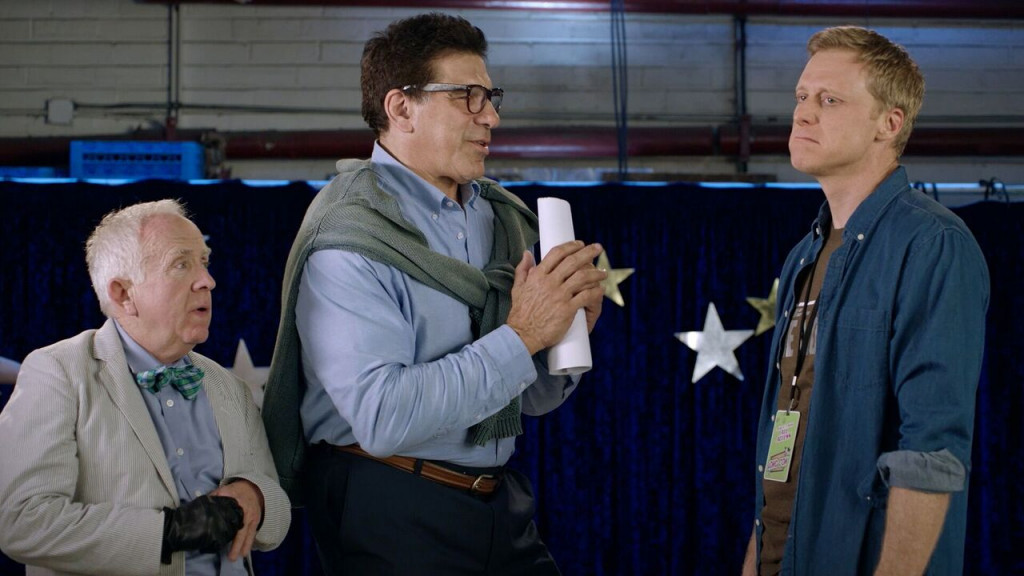 Leslie Jordan (as himself) watches Lou Ferrigno (as himself) ask Wray Nerely (Alan Tudyk) to be a part, “Of Mice and Men: I’M WITH STUPID” on “Con Man” season 2. (Comic-Con HQ).

Part of the success of Con Man comes from its willingness to really embrace absurdity, and that’s shown particularly well in episodes seven and eight of season two, “Pin Cushion” and “I’m With Stupid.” These feature Nerely meeting up with Ferrigno at a convention, and first begging for, then eventually landing a role in his off-Broadway Of Mice And Men musical, appropriately titled I’m With Stupid. The episode by that name is almost entirely the musical within the show, and it’s brilliant, providing a terrific parody of musical conventions that stacks up with recent successes along those lines like Galavant or Sex&Drugs&Rock&Roll‘s “Feast.” 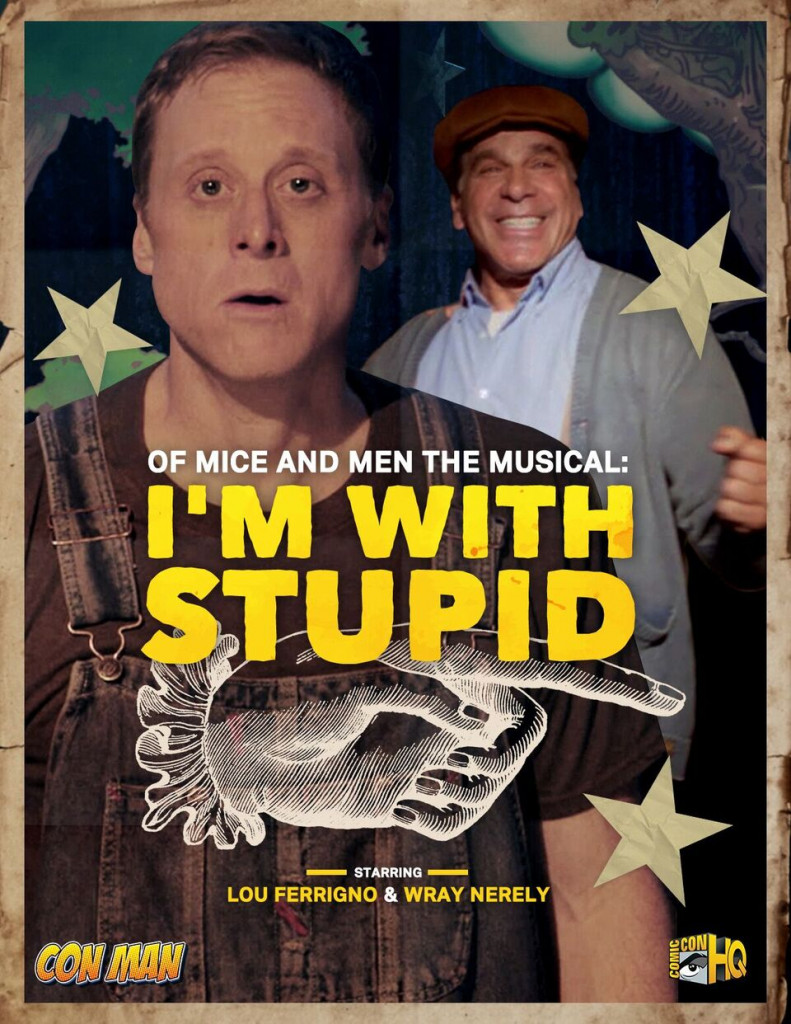 The poster for the musical within Con Man. (Comic-Con HQ.)

The setup to the musical (in “Pin Cushion”) plays out beautifully, with Nerely lobbying Ferrigno extensively at first and trying to convince him he’s not just in it for the money (which he mostly is), plus Ferrigno’s insistence that he should play smart-and-slight George and Nerely should play hulking-but-dumb Lenny.

Ferrigno makes a great reference to his past as The Hulk at one point, telling Nerely “You’re angry. They won’t like you when you’re… you know,” and there are also terrific moments with LongCon organizer Bucky trying to distract the crowds from the absent stars (who are all off rehearsing “I’m With Stupid” backstage) and explaining her nickname, which isn’t about her buck teeth but about how she says “I was pinned under an elk with the family dog. Which I had to eat.” 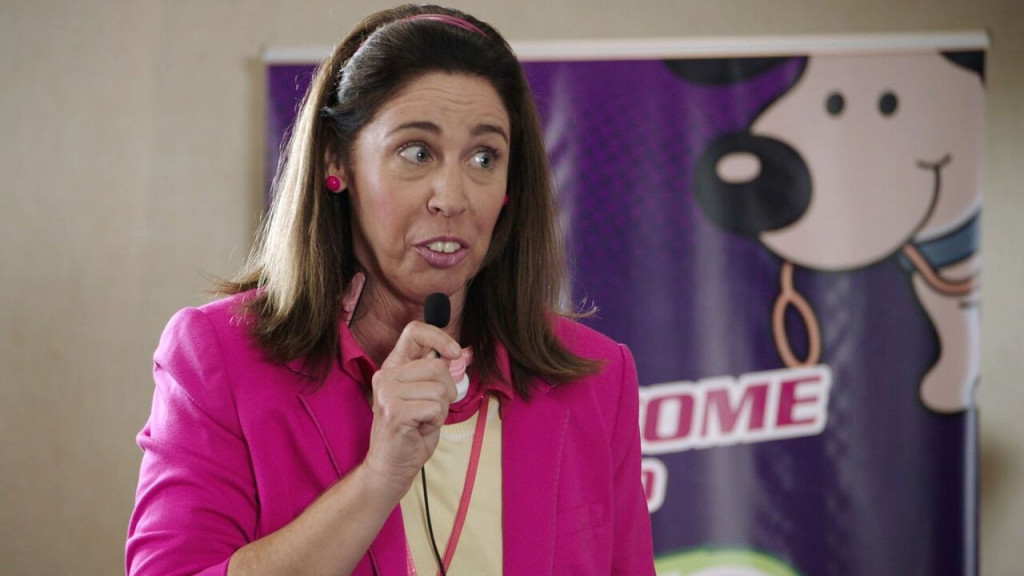 The musical itself is perhaps even better, though, especially when they wind up doing it for the entire con. There are lots of great gags in there, such as decoy stage managers and foreboding musical numbers, and a particular highlight is Leslie Jordan (playing Curley, complete with vaseline glove) hitting Nerely even after he switches roles with Ferrigno, saying “I can’t reach Lou!”

The whole musical plot also helps to reinforce larger themes of Nerely’s ongoing insecurity and the harsh breaks he often gets, and those carry on in future episodes, especially with the running gag of him losing out on roles to “Girth Hemsworth” (Liam McIntyre), a long-lost Hemsworth brother who “spent the last 20 years in the Outback on a walkabout.” That leads to a discussion of “How many Hemsworths are there?” “No one knows. They’re like zebras; they herd together to hide their numbers.” 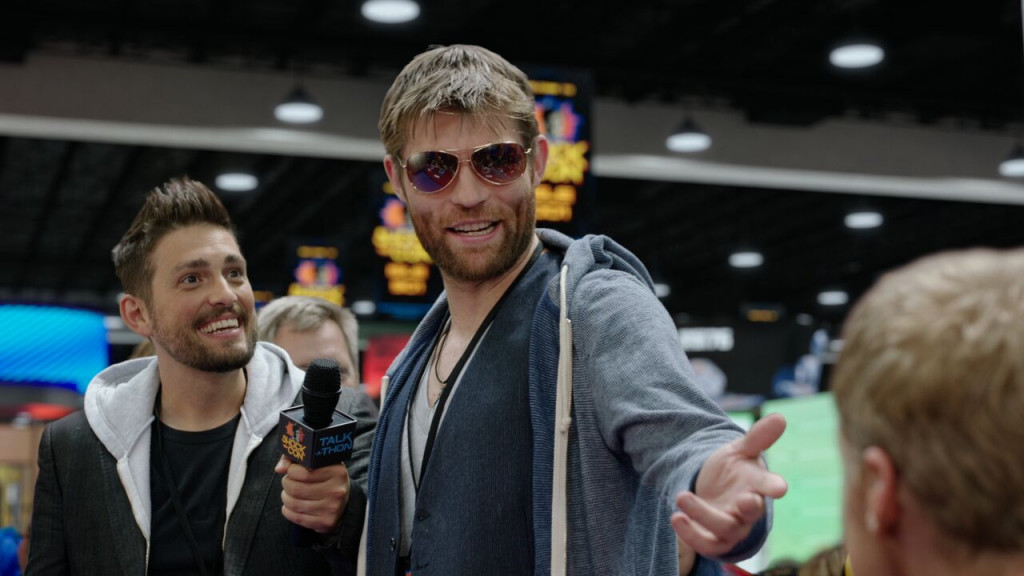 Con Man does well with ludicrous high-concept things such as the musical, but it also succeeds episode to episode with smaller stories. The Spectrum reunion at Shock-A-Con in episode nine, “Back to the Past,” is tremendous, especially with Henry Rollins’ “Stutter” character (who appears to be a thinly-veiled clone of Firefly‘s Adam Baldwin) sneaking around dressed as a tree and threatening to murder foreign Hemsworths.

There are other funny meta moments, such as Fillion’s Moore discussing his “Captain Hammertoe” (Dr. Horrible’s Sing-Along Blog fans will remember his Captain Hammer role), and a discussion of zeitgeisty “vertical integration” leading to a movie career “suffering an abation of brand affection.” There’s also a Stan Lee cameo, but quite a well-done one, and one that even makes fun of his numerous cameos. 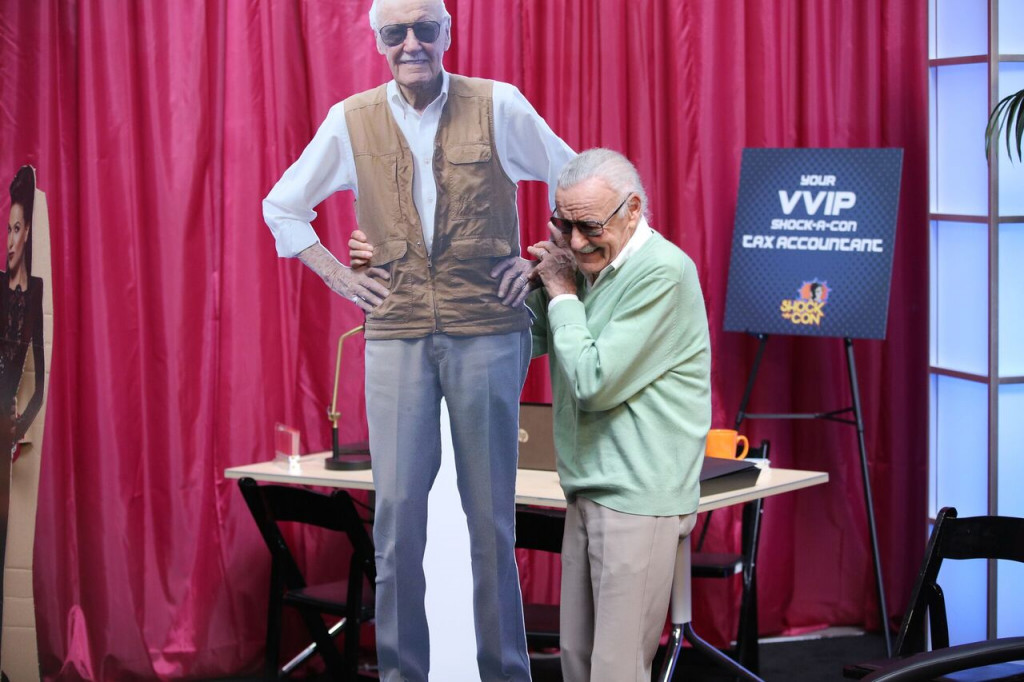 Stan Lee (as himself) holding a cardboard cutout of himself on “Con Man” season 2. (Comic-Con HQ.)

The discussions of conventions’ live-streaming, dangerous obstacles, and VVIP rooms can be pretty funny as well. Overall, this is a show that’s delightful when it’s completely absurd (an area it goes to often), but one that can be very humorous within constraints too. It’s an excellent look at show business, sci-fi and conventions, but most importantly, it’s consistently funny. It’s well worth checking out.