A Bentley and a bathrobe? That’s what happens when Jerry Seinfeld hangs with Cedric the Entertainer.

Cedric the Entertainer lived up to his name, delivering the best episode of Comedians in Cars Getting Coffee‘s season 9 yet. He was surprisingly open and personal, which might not have led to a funny episode, but it was definitely an entertaining one (pun intended).

[Editor’s note: You can read Alex’s other recaps of Comedians in Cars here.]

First off, it was weird hearing classical music at the beginning of the episode, considering who the guest was. I guess I buy the “high society” idea of the 1958 Bentley S-1 Continental in Caribbean Blue, but it felt half-baked. Even just the addition of Seinfeld in a butler’s tux and white gloves would have sold it for me.

When Seinfeld called up Cedric, I laughed when he said “Cedric the Entertainer, this is Jerry the person.” It’s a funny bit poking fun at Cedric’s stage name, which I am all for.

What I am not for, however, is Cedric’s fashion choices. The Muhammad Ali t-shirt was fine, but paired with a white hotel robe and a fedora? But he’s a very successful comedian, so I suppose he can dress however he wants.

In the car, I loved Cedric’s chuckle after Jerry’s first birthday/last birthday joke more than the joke itself because I’ve heard variations of that joke plenty of times before, including from Seinfeld himself.

After the birthday bit, there was good banter about listening to music in the car. I have heard stories of people getting speeding tickets because they were in tune with the music they were listening to, so that conversation landed well.

The last car conversation was the best. Apparently, Cedric used to work for State Farm as a claims adjuster. “I was bilingual because I spoke English and ‘angry Negro,'” he said. It’s also funny how a coworker got him into comedy and how he never actually quit his job. I feel like a “Cedric from State Farm” commercial would be hilarious.

Once they got out of the car, I am glad Cedric shed the robe. That he called out Seinfeld’s pre-laugh on the walk was even better. I’m not a fan of the pre-laugh, either. 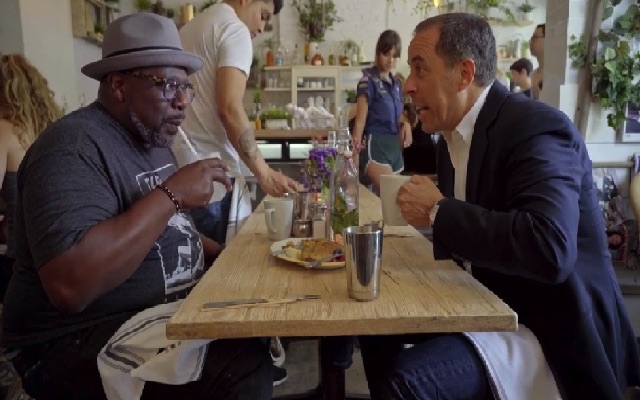 The restaurant for this episode felt pretty non-descript. It wasn’t even named in the episode. It was nothing like the House of Pies from a few weeks ago. But this was nice, as it put the focus squarely on the dialogue.

I wish I could be as cool as Cedric the Entertainer, who admitted he sips tequila from a teacup after some shows.

Seinfeld’s dictator joke fell flat, but that could be because I’ve done too much research on Cuba, a definite dictatorship outlier, and I tend to think of Fidel and Raul Castro when I think of dictators.

This episode was recorded right after Muhammad Ali died and I am glad they talked about it. Seinfeld and Cedric both made great points about the late boxer’s importance, and it makes Cedric’s Ali shirt much more justifiable as a fashion choice.

The restaurant segment felt quick, as did the return trip, but it did yield what I consider to be the episode’s funniest moment. I use Waze sometimes and, like Cedric, I trust that app more than any sort of navigational intuition I may have. Eventually, my GPS app is going to become self-aware and smarter than me. But I, for one, welcome our new computer overlords.

The episode felt short, but also focused, and I liked that. It shed more light on the guest, and Cedric the Entertainer was open. He told personal stories and wasn’t trying to hit punchlines every few seconds. I found it refreshing and think this is the best episode of the season so far.

[One more editor’s note: If you missed the big news about Comedians in Cars Getting Coffee and Netflix this week, check out our post on that development.]