Could an episode of Comedians in Cars Getting Coffee with Norm Macdonald be anything but just a little weird and morose?

Norm Macdonald, comedy’s biggest cynic, took a ride with Jerry Seinfeld this week and it is only fitting the trip came on a rainy day. While the poor weather and uncomfortable car (at least for Norm) made for one of the darkest Comedians in Cars episodes ever, it was still really funny, though your mileage may vary.

The episode opened unusually, with Seinfeld walking around a scrapyard describing the car. While I didn’t notice anything wrong with the 1958 Porsche Speedster in non-metallic blue, Seinfeld pointed out plenty of issues with what would become “a rusty car in the rain.” But the most fascinating part of this Porsche is that it is Seinfeld’s personal vehicle.

While the Porsche is owned by the host, its description is perfect for the guest. “Things that weren’t that well taken care of but hung in there anyway,” is how Seinfeld describes the car, which is fitting of Norm Macdonald, a man who had an illustrious Saturday Night Live career before Don Ohlmeyer unabashedly kicked him off the show. It’s also extremely small and low to the ground, leading to plenty of old man grunts from Macdonald as he got in and out.

The first car ride opened with a funny bit about old people. I thought the later conversation about Rodney Dangerfield was fascinating, as both men agreed Dangerfield’s profane language negatively influenced his act. That led into a short conversation about another comedian, Bill Cosby. In classic Macdonald comedy, he jumps on the fine line between funny and creepy like it’s a trampoline. I found Macdonald’s jokes here funny, but I can see how other people would turn off the episode right there.

At the restaurant, there was a great coffee sipping montage, which included Seinfeld dropping some French knowledge. I am grateful they added a definition of bonhomie at the bottom of the screen because otherwise I would have had no clue what it meant. 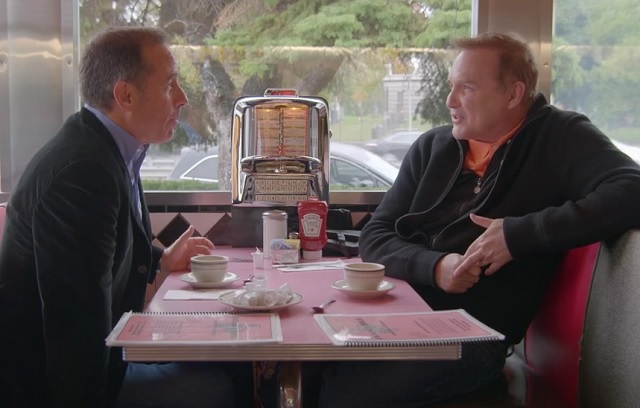 I felt that the Nixon bit missed, but that could be because I’m 21 years old and not a history major. Luckily, Macdonald redeemed himself with some witty lines about hot sauce and aging.

The conversation took a turn to Macdonald talking about Roseanne. His take, just like Seinfeld’s, is that sitcom jokes are inferior to stand-up jokes, which I agree with, but that is because sitcoms also tell a story. But Seinfeld has a good point about bad sitcoms, which not only tell really poor jokes, but also tell a bad story. And it has to be pretty bad if people won’t watch it despite it being free and beamed into your living room.

One of the best parts of this show is when Seinfeld and his guest get philosophical about comedy. This time around, it was when Macdonald asked Seinfeld, “If you don’t like a guy’s act, is there any chance you’d like him?” After thinking about for a few beats, Seinfeld says no.

When the dialogue moves on to talk about the James Bond series, Seinfeld makes the episode’s best — though not funniest — point. “How about a little smile once in a while?” he asks after spelling out all of the luxuries that come with being 007.

Seinfeld and company were very smart to show an extended clip of Macdonald’s last appearance on The Late Show With David Letterman. Aside from it being a brilliantly funny and edgy bit, it showed enough of the context. I’m glad Comedians in Cars got clearance to use that much footage.

However, that moment was definitely the last high point of the episode as the return drive was not very interesting or funny. Macdonald talked about his son being in college, and the only funny line was Seinfeld saying “poetry is bad stand-up.”

And that’s the whole episode. It was simple, going from car to restaurant to car. I didn’t really have an issue with length, though I am disappointed there was no talk of Burt Reynolds/Turd Ferguson and no mention of Macdonald’s sidekick Adam Eget. The episode was predictably paced, leaving Macdonald to fill the episode with his unpredictable and dark sense of humor. Though I enjoyed it, not everyone will.