A new year means a new season of Comedians in Cars Getting Coffee. Now in its ninth season, host Jerry Seinfeld has the unenviable task of keeping the show fresh. Of course, it helps when the guest is as personable as Kristen Wiig. While I didn’t laugh a ton, the episode took some production risks that gave it a different visual feel, which I enjoyed.

When I first saw the car Seinfeld chose, I thought it was more fitting of Kristen Bell than Kristen Wiig. It’s a very pale car — a 1964 Volvo 122S sedan in pearl white — which made me think of Frozen because, well, all the characters in that movie are white. As Seinfeld showed off the red leatherette interior, red insignias on the wheels, and even the “Amazon” nameplate, it was suddenly a much more vibrant — and cooler-looking — car. Despite only having 90 horses under the hood, the car came equipped with some neat safety features for the era, namely seatbelts and a padded dashboard. Once he explained the Scandinavian connection and showed off Wiig’s fandom for old Volvos, I was on board with the car choice.

Still in the intro, Seinfeld dives down the hipster rabbit hole, explaining his old Volvo is somehow like a bicycle with only one gear. Then he argues his jeans being rolled up and his sunglasses with translucent frames are hipster-ish enough for his “hipster day.” The only redeeming part of the biking montage is that he drove past a restaurant with a sign saying “COUNTER CULTURE.” Don’t get me wrong, I’m not a big fan of hipsters either, but this was overkill.

Wiig just about faints when she sees the car. The first conversation even revolves around how Wiig and her boyfriend have bonded over old Volvos. Before parking the car, there is a very neat shot panning across it, which is something I’ve never seen before on the show. I wonder if they filmed it using a drone because it looked like the car was still in motion when this happened.

Seinfeld and Wiig take some conversational detours on their way to the House of Pies. The pie montage when they enter made me hungry, while the conversation came across as very “fangirly.” Seinfeld talked up these moments of Wiig that weren’t very funny out of context, but he brought up the 2013 Golden Globes and Saturday Night Live. I didn’t like the fact I wasn’t laughing. Luckily, the man they saw with his dog earlier walked past the restaurant, even carrying his dog instead of walking it, leading to a laugh that could break up Seinfeld’s career crush on Wiig. 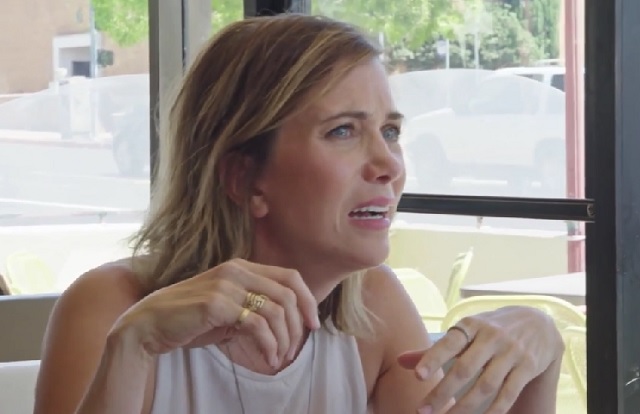 I thought Wiig’s insight on playing a character versus playing herself was the most fascinating part of the episode. She makes the distinction clear, including explaining why she doesn’t describe herself as funny.

Afterward, Wiig talks about her love of donuts, even preferring them to a cake on her birthday. That made me wonder why Seinfeld took her to a place called House of Pies, but it made for a funny moment. They ended up ordering a very good looking peach pie.

The conversation took a smart turn as Wiig talked about how SNL works behind the scenes. Hearing her explain what cutting time in a sketch was like and the importance of the show to her was nice. I also enjoyed her joke about the hectic hours that come with working on that show.

Each of the next three segments were dominated by Seinfeld, and only the last one, about the comedian with a bullhorn, was laugh-worthy. Luckily, Seinfeld’s fourth story was a funny one, about what a billboard for Sugar Models could be advertising. Wiig joined in on the fun and the fact they almost called the number shows how funny they thought it was. Too bad they didn’t call, as I’m sure the phone conversation would have been hilarious. 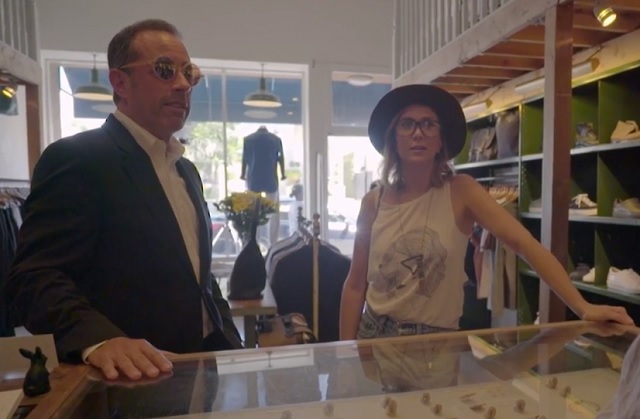 While Seinfeld is amazed by how inexpensive the check is, he missed an opportunity to bring the bit back later on. He could have complained about how pricey the sunglasses were during that scene, which included a great joke from Wiig, and he could have also gone off about how expensive Jeni’s Splendid Ice Creams (pie and ice cream, but no donuts?!) is. Don’t get me wrong, their ice cream is fantastic, but the two cones they got probably cost as much as brunch. Wiig signing an autograph and joking she wrote “I Hate You” on the paper was a funny way to end the scene.

I was in shock when they showed the car on its return trip and Wiig was driving. This rarely happens, let alone without the show making it known the guest is driving. I would have liked to see more of this, especially if she or the car had any issues, or if there were some funny moments from the drive. In fact, I would have enjoyed more time for all of the events post-House of Pies.

While the episode ended somewhat abruptly, Comedians in Cars followed its formula well to open up season nine. Kristen Wiig was pretty funny, even though there weren’t many memorable moments – good or bad – from the episode. Some great visuals made the episode look new, but they couldn’t take the episode from good to great.