Benedict Cumberbatch and Martin Freeman are back as Sherlock Holmes and Watson. Let’s talk about Sunday’s season four premiere, “The Six Thatchers.”

“The Six Thatchers” served as the fourth season premiere of Sherlock. And my goodness, what a return to this particular world.

So, there’s no real way to discuss the main developments of the episode without talking about the ending, so here’s a brief, spoiler-free review of the episode to start.

(Well, as spoiler-free as possible.)

The episode opens with Sherlock getting pardoned for his execution of Charles Magnussen, which occurred near the finale of season 3, all the way back in January of 2014. As you may or may not remember, he did that in order to protect John’s wife Mary, whose past as a highly-skilled mercenary could have been exposed, and would have been used for blackmail.

The pardon was necessary as Sherlock is going to be needed to battle a new threat from Moriarty, who is somehow pulling various strings from beyond the grave. That’s the setup at the beginning of the season 4 premiere and right away, the tone is much more in the mold of early-season Sherlock. In my preview on Friday, I addressed concerns that the upcoming season appeared very dark, at least from the trailers:

Early in the premiere, we get a familiar (and mostly welcome) montage of Cumberbatch tossing off less-interesting case opportunities as beneath him. He even diagnoses one man’s divorce as a result of halitosis, which is a callback. The main change, though, is that what began as a series centered as much or more on Martin Freeman’s Dr. Watson is now firmly rotating around Holmes. John is married and shortly into the episode, Amanda Abbington’s Mary delivers their child. That does set up a few scenes demonstrating domestic unhappiness, eerie in light of Freeman and Abbington’s real-life separation. 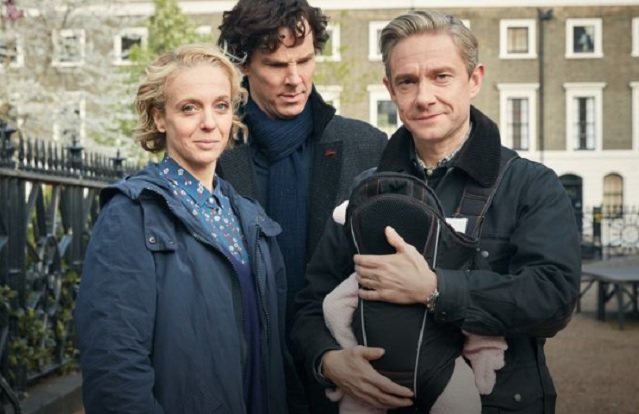 The reintroduction is handled deftly, with much more tonal coherence than season 3’s disjointed, never-fully-satisfying attempts to explain Sherlock’s bit of death-defiance. There is a framing device, with Sherlock reciting a parable, “The Appointment in Samarra,” about fate, death, and predestination. That gets referenced multiple times, and indeed seems likely to be a theme for the entire season. The show still offers its normal tricks and visuals, including texts being overlaid onscreen. This has been expanded to include FaceTime calls as well, which makes for an interesting, if crowded frame.

One of those calls is what drives the opening mystery, the first one Sherlock finds interesting enough to be worthy of his attention. The son of a politician (or government official of some sort; it’s British government, who can keep it straight) makes a video call to his father from Tibet, only to turn up dead in his father’s driveway a week later.

How that mystery is solved is probably best left to the show, and it’s clever enough. But it mostly serves to connect Sherlock, John, and Mary to the true throughline of the episode, a series of break-ins resulting in the destruction of identical busts of Margaret Thatcher.

That’s a problem, though, because it’s a freaking huge coincidence — so large, I at first assumed it was intentional. But no, it’s another example of Sherlock not exactly playing by the rules its protagonist worships.

Having said all of that, the story jumps over to one more focused on Mary Watson, and here, now, we must leave behind those of you that are looking to avoid spoilers. 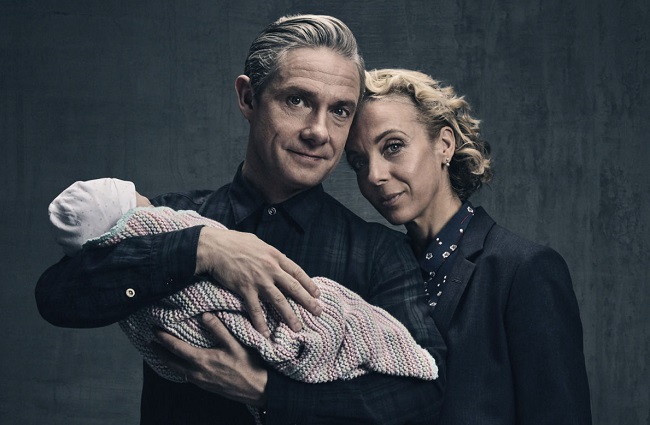 The main mystery of the show surrounds Mary’s background, and how her history continues to endanger her, and by extension John and their new child. Sherlock, of course, has sworn to protect her, so he’s in the line of fire as well. But revealing the entire plot of a mystery is pointless for a review, so let’s skip straight to the end, because my goodness.

In my Friday preview, this was one of my guesses for potential season 4 plots:

Well, about that. Near the end of the episode, Sherlock has figured out the mystery of who sold out Mary’s mercenaries six years prior, and tracked the culprit to an empty aquarium. (Oh, right, “The Six Thatchers” is heavy on shark imagery.) Instead of just apprehending the villain, Sherlock goes on a patented rant intended to demonstrate just how much smarter he is than his adversary, and how he’s predicted their every possible move.

That adversary decides to show Sherlock that he’s not as omnipotent as he thinks, by pointing a gun at him and pulling the trigger. Mary is the only person in the room to see this coming, and lunges in front of Sherlock, taking the bullet square in the chest. And unlike when she shot Sherlock back in season 3, she does not make it out alive. John arrives right then, in time to hear her final words.

And then she’s gone.

Watson’s grief is evident, and it’s painful and beautiful work from Freeman. This is certainly darker fare and if handled properly, Sherlock could really mine true depth from this. (It’s worth noting that it’s a development taken from the source, as well, not strictly something played for shock value.)

And so, with two episodes remaining in the season, we’ve lost Mary. John has fled from Sherlock, blaming him for Mary’s death. All while whatever plan Moriarty or someone like him has in store for Sherlock has yet to unfold.