The appearance of Spider-Man was one of the most anticipated and exciting aspects of last year’s Captain America: Civil War (now streaming on Netflix, if you haven’t seen it or need to watch again). After Sony struck out with its attempted reboot starring Andrew Garfield, the studio looked to Marvel for a life preserver, partnering up to produce a more faithful and popular cinematic version of the globally popular superhero.

We’ll see Marvel’s version of the friendly neighborhood web slinger this coming July in Spider-Man: Homecoming, but our first look at the yet-again-rebooted Spidey occurred in Civil War, notably during a scene in which Robert Downey Jr.’s Tony Stark visited the new Peter Parker (Tom Holland) at his apartment in Queens. At that point in the story, Spider-Man was trying his best to be a crime-fighter, albeit with the budget of a high school kid. And he’s been discovered by Stark, who’s looking for new blood to recruit.

(Unfortunately, there’s not a great version of the scene to embed here, likely to avoid Marvel sending the copyright Avengers after YouTube users. But this clip is serviceable.)

Though Stark’s video is surveillance footage that doesn’t provide a great look, we do sneak a peek at Parker’s homemade Spider-Man costume, what he was suiting up in before getting the significant tech upgrade that he’ll receive from his new superheroic benefactor in Spider-Man: Homecoming.

The notable piece of Parker’s consignment ensemble was the goggles that emulated the signature Spider-Man eyes. This is actually an item that was teased nearly two years ago by directors Joe and Anthony Rizzo on Twitter while filming Civil War.

As Birth.Movies.Death’s Devin Faraci speculated at the time, what else could that be but part of Spider-Man’s makeshift costume? The red and black colors were certainly evocative of his signature look. Spidey was already reported to be making an appearance in Civil War, though we didn’t know what sort of role he would be playing in the story.

But it figured that if Marvel was going back to the beginning with the character, then Parker wouldn’t have had the resources to put together the Spider-Man suit that we’re accustomed to seeing. As we now know, that was exactly the case as Stark found the upstart superhero and gave him an Avengers-style makeover to better prepare him for the showdown with Captain America and his allies.

Yet other than that quick peek in Civil War, we never got a look at the pre-Stark Spider-Man costume. That is, until now. As superhero movies have become more popular while studios try to be as secretive as possible to maintain mystery and avoid spoilers, toy companies that have licenses with the production often give away costume reveals or story points when they reveal new products during showcase events.

This isn’t a spoiler, per se, unless it gives away a scene in Homecoming, but Hasbro did reveal what the old Spider-Man costume looked like while showing off its line of new Spidey toys (via Yahoo! Movies). 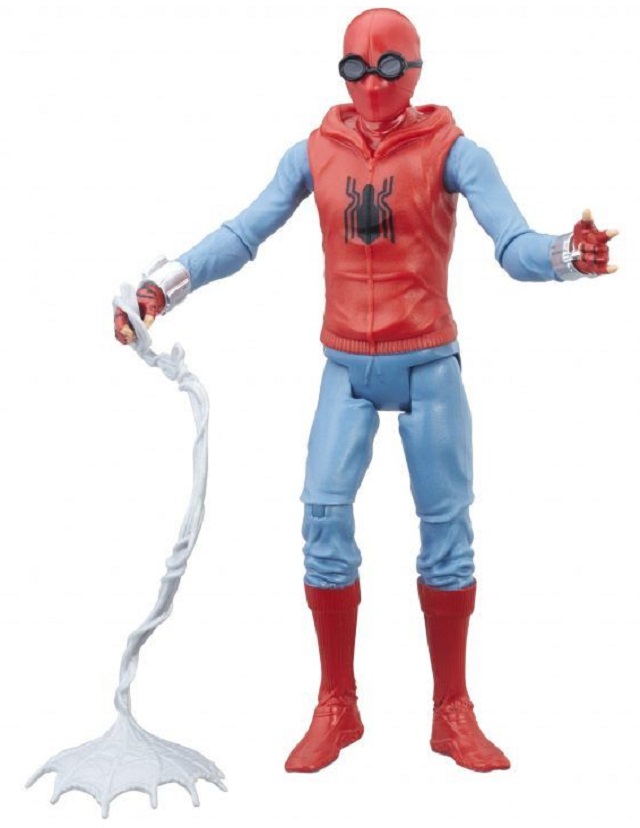 As Parker tells Stark in that Civil War scene, “it’s not a onesie.” But we do see those goggles with a ski mask and hoodie sweatshirt. He’s probably wearing sweatpants. What about those boots? Are those fancy socks or modified fly fishing waders? All of those questions are probably moot, now that Parker got his significant costume and equipment upgrade from Stark. But it’s fun to get a look at, especially for diehard fans of the character who love to see his evolution as a superhero.

Hoodies and goggles. Many parents could be relieved this coming Halloween, knowing that they could possibly go into their closet or peruse a garage sale to put together a makeshift Spider-Man costume for their kids. And if this version of Spidey shows up in Homecoming, those moms and dads can point to that scene and say yes, that is Spider-Man. We don’t have to spend more money on a licensed costume. You’ll probably look cooler and stand out among classmates and the trick-or-treaters anyway as old-school Spidey.

Or the kids might just want the “homemade suit” action figure to go along with the regular Spider-Man toy when those hit the shelves of your nearest Target, Walmart or Toys R Us. Yahoo! Movies has a look at the entire line of Spider-Man: Homecoming toys. Go give those a look. (Some of us grown-up kids might be looking for those, as well.)