What would happen if Jerry Seinfeld grew up in the Midwest, was Catholic and had red hair? That is a question I pondered while watching the season 8 premiere of Comedians in Cars Getting Coffee. The answer to that riddle is this week’s guest, Jim Gaffigan.

The Indiana-born Catholic comedian from New York had a similar approach to host Jerry Seinfeld (a Jewish New Yorker), despite the two coming at their observations from different perspectives. While this could have made the banter feel redundant, it actually helped the conversation build and made for strong dialogue. Team that with a great car and some small style tweaks and Comedians in Cars feels fresh for a show in its eighth season. 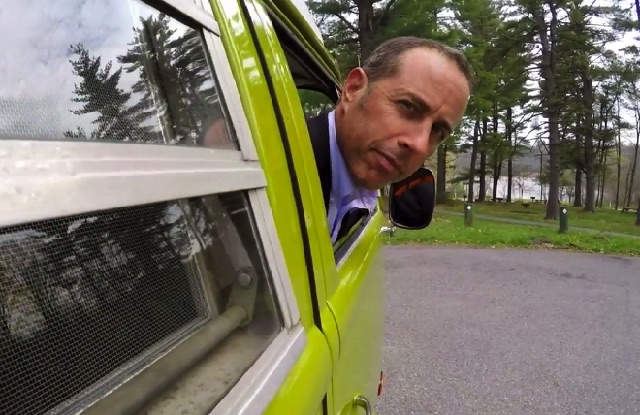 I hinted at a great car, and maybe it is the Scooby-Doo fan in me, but a Volkswagen Bus is a groovy vehicle. This one happened to be a 1977 model in a “sage green,” a color that should not exist, let alone be put on a car. It also has a plaid interior, which is somehow better than the color on the outside, which should tell you how ugly sage green looks. Unless I am watching the music video for Fancy, I should not see those colors or patterns!

I digress. The car is also a camping model, which turns it into a tiny house on wheels, complete with a bed, closets, a kitchen, a sink, a pop-top roof that expands the height of the bus. What’s sad is that the bus might be bigger than my dorm room.

The first style change I noticed was the intro, which included a different shot of coffee pouring and the Comedians in Cars logo overlaid onto the car window instead of just appearing on the screen. I think every show should change a few little things every few seasons, so this was definitely overdue.

After Gaffigan is introduced, the first bit is about how he opened for the Pope, which is met with a comeback of “I did an episode of this show with the President” from Seinfeld. Clearly, these are two very accomplished comedians, even if they self-admittedly never expected to have moments like these to brag about.

With Seinfeld as an established and extremely successful Jewish comedian, does that make Gaffigan his Catholic counterpart? I think so and so does the host. “I cannot believe how similar we are,” Seinfeld said early on during the episode, to which Gaffigan responds “You’re a big influence on me. Is it Jerry?” If I didn’t put names in this exchange, you’d really have to guess at who is saying what.

I am not extremely familiar with Jim Gaffigan’s work, but he comes across as a very efficient person. While this could be seen as laziness, it is more a prioritization than a way of life. When he talks about the “closest best burger” and convenience, I took it more as him talking about the hectic travel schedule of a stand-up comedian than him wanting to sit on a couch doing nothing all day.

The opening drive was strong, highlighted by the convenience bit and the bit about horses, mainly because the two set each other up to deliver strong punchlines. This led into the bit about reading in the park and the “camping,” which was two lawn chairs in front of the VW bus.

This “camping” scene might have produced the best line of the episode. Gaffigan turned the tables on Seinfeld, something I like in small doses. Upon finding out that Seinfeld’s son does not like cars, Gaffigan asks “Is there a sense of disappointment?” Seinfeld responds immediately, as if he knew the question was coming and that it would be worded like that. “No, it’s actual disappointment.”

The second driving portion fell flat compared to the first, though it was funny to talk about how much Gaffigan said “right?” at the end of his sentences. I didn’t care for the self-reference of Seinfeld’s “high and gay” line.

Once the duo entered the 2nd Ave. Deli, I knew the lunch scene was going to be epic. While the conversation could have been better, the food looked fantastic. I am not a fan of pastrami, but their sandwiches made me want some. The “that’s good” montage about the food was edited like a scene from The Big Lebowski, which made it trippy and cool. Hard to believe that was only the second-best montage in the episode.

After the meal, the conversation was subpar until the very end, when Gaffigan had a good story involving Bill Cosby. It wrapped up with another mention of meeting the Pope, to which Seinfeld came back with “it was like me meeting Mel Brooks. That’s as high as it goes.” It’s a small joke but a quality one, in my opinion.

The final drive made me laugh because of how it more or less unintentionally broke the fourth wall. It started with the two joking about how many networks there are for shows, which is funny when you consider Comedians in Cars airs on an online network. Then, when they ran into another show shooting on the street, the whole segment came together. I just wish I knew what show they converged with.

A strong ending makes me want to watch the final 30 seconds over and over again. The compilation of Gaffigan saying “right?” — with a few from Seinfeld peppered in for good measure — was hysterical. It felt like a “single shot” one-off video, but it was all the same subject, making it funnier.

After seven full seasons, Comedians in Cars Getting Coffee has a formula that works. A few minor style tweaks made some smaller improvements, though not enough to prevent some slower sections. The episode had an awkward flow between great segments and unmemorable ones, but delivered some funny lines. Jim Gaffigan is very similar to Jerry Seinfeld, which made him easy to work with as a guest. Nothing felt forced and there was some good conversational to-and-fro. I might even have to start watching The Jim Gaffigan Show! 8.25/10