After last week’s strong season premiere with Jim Gaffigan, Comedians in Cars Getting Coffee had pretty big shoes to fill. In this case, make those pink boots, as Margaret Cho stole the show. She was unafraid to talk about rape, masculinity, sexuality and plenty of other risqué topics, showing a side of her that was both candid and honest.

Margaret Cho is a fascinating woman. She is Korean, bisexual, a rape survivor and a comedienne. I learned all of this from watching the episode, but it brings me to my first question. Is it insensitive if the car is Asian, but not Korean? Host Jerry Seinfeld chose a white 1967 Mazda Cosmo Sport with black-and-white houndstooth-patterned seats and fittingly fancy red carpeting. It was only sold in Japan and comes with a Wankel engine.

I’m glad that Seinfeld gave me a diagram and description of this unusual engine type. It’s funny how he was able to jog my memory. I learned about this specific engine type as a sophomore in high school because my math teacher had a car with a Wankel engine and used it for a lesson. Alas, the Wankel engine is no more, but it lives on through my former math teacher and this rare car.

“This car is different,” Seinfeld said. “It’s unusual. It’s rare. It’s unique.” All of those are the perfect words to describe Margaret Cho, and once I knew what the guest was going to be like, I buckled in for a wild ride. Cho definitely did not disappoint.

Also of note, the introduction went back to the old title card style and lacked the more detailed pouring section. While I am not completely heartbroken, I liked the change last week and hope it comes back next week. At least the humorous Acura product placement made a return.

The first car conversation is about Cho performing in Korea, but it ends up being about Korean culture. Cho gives examples of how Korean people act in conversations and it sounded a lot like Tim Allen’s grunts on Home Improvement.

During the rest of the car ride, Cho mentions she is bisexual and tells a story about a transgender couple. When she exits the car at the first stop, her boots come into view and they are fantastic. Knee-high hot pink boots are not something just anyone can pull off, but Margaret Cho does it with, dare I say, flying colors.

When the pair stopped for coffee, Cho told a hilarious story about how important education was in her family. This bit alone would have made the stop worthwhile, but then came Cho telling Seinfeld about the first time they met, when Cho was very young and apparently a college-aged dropout. Getting a compliment from someone you idolize and respect can be so powerful and meaningful. That applies now more than ever in the age of social media.

Cho also talked about rape, rage and bombing a show during the coffee segment. The rape discussion is by far the most powerful because it relates to the show bombing story and shows how Cho has taken power back from the rapist. While she does not “glorify” him by divulging a name, she talks about it freely and, as she admits, makes him scared about what she could do next. 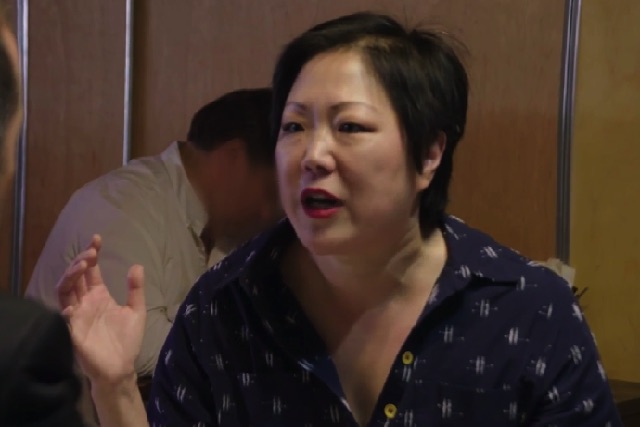 Before leaving the café, Cho and Seinfeld talk about social media, relating to the idea of compliments and how people hiding behind keyboards can be so insanely vicious. Cho also brings up the show she bombed and promises to make it up to the people in the audience. Sure, she’s a professional, but being able to show humility and own up to poor performances is admirable in any field.

Seinfeld and Cho head to a guitar shop next, where he mentions the replica Hindenburg lacking a Swastika. This is brought up later when Seinfeld notices some symbols on the highway. I’m Jewish and enjoy jokes about my religion, but I think these two jokes should have been cut from the episode. It isn’t that they’re not funny because they can stand on their own. It takes away from Margaret Cho because it doesn’t relate to her. Considering how much she is talking about othering, I would have preferred the episode focus on the othering she is mentioning, instead of a completely separate and independent example that doesn’t tie into the rest of the episode.

Even though I just spent half a dozen sentences explaining why I didn’t like Seinfeld’s Holocaust-based example of othering, it wasn’t a complete waste. It might have missed the mark, but I think the ensuing ice skating bit was spot on. That topic illustrated how masculinity and femininity can appear from the same object being used in two similar, but independent ways.

It seems Cho can talk about everything, as she is “all of these different things” and does not get offended despite more discussions about race, feminism (the loud braking in the background was one of the episode’s funniest moments) and sexuality. This is nice in a time where PC culture has made it impossible to talk about anything without someone getting offended. 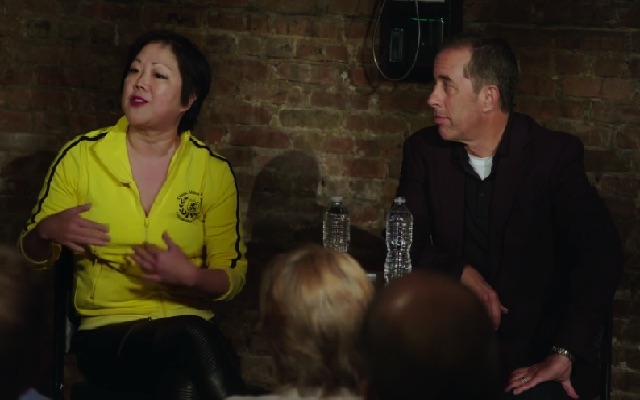 Next was a trip to Cho’s neck of the woods, where the two visited an Asian market and a coffee shop, where they got some “Hot Cohcolate.” This led to Seinfeld offering to film Cho’s return to the club to make amends. The comedienne accepted and the filming took place two weeks later.

While I thought the filming of Cho’s return would solely be highlights from a comedy show, it was much more than that. Prior to a montage of moments from their stand-up shows, Cho, Seinfeld and the crowd had a nice talkback-style discussion that allowed for a few laughs and a lot of fence mending.

In the end, while this episode lacked laughs compared to what is typical of Comedians in Cars Getting Coffee, it subbed in a handful of high-quality, thought-provoking moments on a number of modern issues. I thought it was great, but depending on how much you like seeing an envelope pushed off a cliff, your results may vary. My only knock is a lack of memorable quotes (hence the inclusion of only a few). Even though specific lines were not memorable, I enjoyed the constant focus on topics that some might consider “uncomfortable.” 9/10