Along with Celebrity Family Feud and The $100,000 Pyramid, ABC’s new “Sunday Fun & Games” block brought back Match Game. Since the final Gene Rayburn-hosted version went off the air over 30 years ago, it has been the victim of subpar revivals. Is Alec Baldwin fit to hold Rayburn’s microphone or does Match Game flounder like its previous revivals?

Growing up, I watched a lot of Match Game reruns on GSN. Young Alex thought Gene Rayburn was the most interesting man in the world. I also thought Brett Somers and Charles Nelson Reilly were royalty. Pretty much everyone from the original run is dead now, although watching it definitely made me a hipster when it came to Betty White’s nonagenarian career revival.

I preface this review with that information because Match Game is my favorite game show, so this revival was held to a very high standard.

Immediately, I was caked in nostalgia with the same open and theme song I knew from years ago. Sure, it was modernized for 2016 and HD televisions, but it felt like the same Match Game I know and love. The set is brighter than before, but has the same aesthetic as the old versions. It looks fresher. If Match Game had run for the last 30-plus years without going off the air, this is how it would look.

The competition round was untouched from the original, with two rounds of questions for contestants to match the six-celebrity panel. This is the round that Match Game is known for and I’m glad no one tried to change it or create a gimmick with it. The show filled out an hour with two games, each fitting within half of the episode. Even though there are no returning winners, there was continuity during the hour. Baldwin chatted with the panelists between games, an opportunity for a few of them to promote their work. ABC’s other Sunday night premieres were half-hour shows joined together. Match Game felt like it was designed to fill an hour.

The first game’s questions might have been too meta and mature for Match Game. In the first round, there was one explicitly about sex (the old show was heavy on double entendres but wasn’t so obvious with them) and one about host Alec Baldwin, these questions were not as open to viewers who watched it blind. The clown college streaker and hickey limerick, while closer to the Match Game I remember, still came across as a bit too adult.

Questions were better in the second game, including a “How _____ was it?” audience talkback. There was also an obligatory Donald Trump question. It contained a smart premise, enabling everyone to joke about the “orange slug,” as Rosie O’Donnell described him, without it feeling like a roast. Maybe the first game was just for old Match Game fans and the questions in future episodes will be more like the second game.

None of this applies to “Super Match,” where the format was practically a copy of the original. It was simple and it worked.

My only issue with “Super Match” was the prize money. It maxes out at $25,000 for the grand prize. Considering contestants do not defend their wins, this is their only chance to win a significant amount of money. In 2016, no primetime game show on network television should have such an embarrassingly small top prize. The new revival of The $100,000 Pyramid maxes out at $50,000 in the first winner’s circle trip and the titular $100K if a player wins there twice. Even the daytime “little engine that could,” Celebrity Name Game, has a grand prize of $20,000! Taking these into account makes me think the top prize for Match Game should have been $50,000.

While I can keep complaining about the paltry prize money, Match Game is more about the people: the contestants, the host, and the panel.

The contestants were too excited considering how little (comparatively) money was at stake. But they were able to show enough personality to make them relatable that I wanted them all to win.

Baldwin is a good, albeit talkative host. His skinny microphone (now wireless!) was a nice homage to Rayburn. I was concerned the microphone would be one of many ways Baldwin copied Match Game‘s original host, but this wasn’t an issue. While Baldwin made too many one-liners for my liking, I can’t complain too much because I laughed at nearly all of them. Plus, he was able to relate well to every single panelist, which made them more comfortable and led to great answers and reactions.

Which leads me to the panel. The producers all deserve raises because they picked a group of celebrities that made the show entertaining. Everyone wanted to be there and had fun filling out their blue cards. 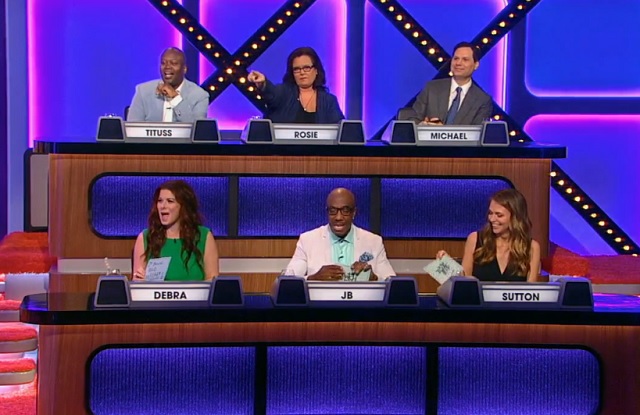 Tituss Burgess, Michael Ian Black, and JB Smoove were able to show off their comedy chops, even if they weren’t the best guessers. Black was the biggest disappointment considering he hosted two different game shows, but he was still adequate, at worst. Smoove had a ton of energy, though this took away from the game at times. Again, not a huge problem, but something noticeable that took away from the show.

The women were all very strong, especially from a reactions perspective. Debra Messing’s laugh was great, as was Sutton Foster holding her head or grabbing her hair. Some might have found Messing’s reactions a bit over the top, but I didn’t think they were faked. Foster was put in the unenviable position of going last and sitting next to Smoove. She was still pretty good, but anyone going after Smoove would have had it tough.

Last, and certainly not least, was the star of the panel. In a sea of strong waves, Rosie O’Donnell was a tsunami. She sat in Brett Somers’ old chair, squarely in the middle of the top row. She didn’t speak a lot, but she made every line count. She was also, in my opinion, the best guesser on the panel. The contestants saw something in her, too, as both winners chose her for the head-to-head match. Maybe I was influenced by her strong performance on The $100,000 Pyramid, but I geuinely believe O’Donnell can be the glue of a panel no matter who else is next to her.

Match Game ended abruptly compared to the original, although this might have been due to the games being fit into half an hour apiece and the panel chat portion moved to the middle. I would have enjoyed a preview of next week’s panel, but in the era of binge watching and DVRs, it’s an understandable omission.

Despite what I think is a not-so-grand prize, Match Game is a revival that stays true to the original with a mostly unchanged format and strong panelists. It isn’t perfect, with some over-the-top comedians and overly (and overtly, for that matter) mature questions, but I shouldn’t complain. For the first time in my life, there are new episodes of Match Game, and they’re good! 8/10