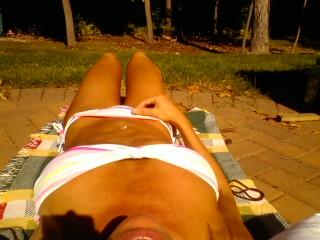 It’s been entirely too long since we brought you an update on the saga of “Front Row” Amy Williams so as a public service announcement, we’re going to take care of that now.

Front Row Amy’s life changed for good about a week ago when Deadspin’s I-team discovered her as “the buxom lass behind home plate at Miller Park.”

Since then, she’s become much more than that. To say the least, she has become the apple of the blogosphere’s eye, a Brewers fan turned micro-celebrity who all of you turned in to one of the most popular posts in this site’s history.

So how have things gone for her since then?

Front Row Amy has seen her Twitter following increase nearly 700%, from around 200 when she enjoyed a life of blissful anonymity as a Wisconsin housewife/accounting professional to 1300+ as the woman of many baseball fans’ dreams. Because again, she’s really attractive and clearly cares about her favorite squad.

She’s also got a Facebook fan page with more than 700 fans, something that is sure to grow as interest in the Brewers does.

But what does she think about all the added attention?

“That just completely amazes me,” she told me in a brief conversation over Twitter. “I’m just being me!”

Being her is clearly working on multiple levels.

On her Facebook fan page and her Twitter feed, Front Row Amy clearly hasn’t let all the added attention go to her head. This despite the fact that she’s attracted significant attention in both the local Milwaukee as well as the national media. She’s still as exuberant about the team, endearing herself to her newfound fan club with posts like this one:

Front Row AmyDo you guys feel the Kwan as much as I do? This #Brewers team is AMAZING – individually & collectively. This season is a treasure! 🙂

Because at the end of the day, Front Row Amy is still the same everywoman she was before she became famous.

Since she entered our collective consciousness, the Brewers have gone 4-3, dropping the first three games after she appeared on our radar before rattling off four wins in a row to extend their lead in the NL Central over the Cardinals to 10.5 games. Amy herself has engaged in a friendly Facebook competition with Brewers southpaw Chris Narveson to see who can get more followers. As of this posting, the beauty is leading the beast by a margin of 709-698.

And who can blame Brewers fans for liking Front Row Amy more than the Narve Dog? After all, while Narveson has put together a decent season at 10-6, 4.26 ERA, as you can see from the picture above, he’s got absolutely nothing on Wisconsin’s newest sweetheart.

Whether Front Row Amy’s lucky streak continues on through the World Series remains to be seen. But one thing’s for sure — if nothing else, she’s made an already great season for the Brewers even more interesting.