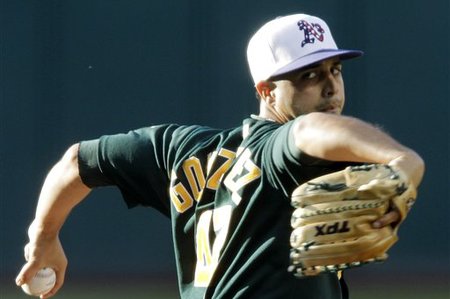 Most people agree that the Nationals and A’s matched up relatively well on the Gio Gonzalez trade.  I won’t bother debating that.  My personal feelings are that Gio Gonzalez is a solid #3 starter whose value has skyrocketed because of the lack of depth in the free agent market and the Nats paid a good, but not astronomical price for Gonzalez’s services.  Still, this trade carries a higher than normal degree of risk for both teams.  Risk is unavoidable in trades where prospects are involved and a player switches leagues.  However the nature of the prospects involved and the environment Gonzalez is leaving and heading toward make this a riskier deal than most.

A.J. Cole – Cole has a very good fastball, and that’s about it so far.  I love the mid-90’s heat that he brings, it should set up all the rest of his pitches well, but it doesn’t.  His curve and change up are nothing worth writing home about.  Because of his fastball and big physical presence I can see Cole becoming a big league reliever, but I don’t envision Cole remaining in a rotation in the future unless his curve and change show drastic improvement.

Tom Milone – Milone is the perfect example of a pitcher that gets by on control and intangibles despite well below average offerings.  Oakland is the perfect environment for Milone to thrive in, because he’s going to get hit and hit hard by major leaguers, but he needs to be in a cavernous ballpark that keeps homeruns in.  Milone will probably have fits trying to deal with the deep Texas and improved Angel lineups throughout the year, but he looks like an average fifth starter to me.

Derek Norris – Norris has already earned the reputation as an “all-or-nothing” type of hitter in the minors and from what I’ve seen of him, he’s done nothing to dispel this outlook.  He’s a well-built, solid defensive catcher that swings for the fences.  When he makes contact, the ball reaches the fences.  The problem with Norris is, history doesn’t generally shine brightly upon those who hit a meager .210 in AA with 117 K’s.  Norris will be a big league catcher because he’s terrific defensively, but he won’t make enough contact to become good major league catcher.

Brad Peacock – I like Peacock, he has clean mechanics and spots his average fastball and above average curve relatively well.  I haven’ seen his change up yet but reports indicate it’s coming along.  Peacock is probably only a year away from become a staple of the A’s major league rotation and he has the look of a decent number three of four starter to me.

As you can see, no prospects that are going to knock your socks off.  All four look like they’ll become big league ball players, but none actually look like they’ll become all-stars like Gio Gonzalez is.  Frankly, following the Mat Latos trade I expected quite a bit more in return for a steady mid/front of the rotation lefty like Gio, but it appears the Latos deal was an outlier and that the Gonzalez trade has probably brought the market back to its equilibrium.  It is possible that the Nationals overpaid though, because Gio Gonzalez comes with some minor question marks himself.

Gonzalez isn’t a physically imposing pitcher to begin with.  He won’t overpower hitters with his 92 mph fastball and while he is left-handed, he’s not particularly deceptive.  What he does offer is a decent two-seamer that induces ground balls and an above average big looping lefty curve.  There really isn’t much of a change up yet, but he’ll throw it from time to time just to keep hitters honest.  His arsenal suggests he’s a mid rotation starter, but his numbers may suggest otherwise.

The last two years he’s posted an ERA of 3.23 and 3.12.  He’s topped 200 innings both seasons and held a healthy K/9.  Gonzalez offers too many free passes and his WHIP isn’t particularly great though (1.31 in 2010 and 2011) but he seems to get by without sustaining too much damage.  However, take a closer look at Gio and it appears a great deal of his success is attributed to pitching in the cavernous Oakland Coliseum.  In 2010 his ERA in Oakland was 2.56.  Away from Oakland it was more than a full run higher at 3.92.  In 2011 it was more of the same, 2.70 in Oakland and 3.62 away from his home.  He’s moving to a relatively unforgiving ballpark in Washington, so chances are he’ll need to rely heavily on his two-seam fastball to get by.

I expect Gonzalez’s ERA to jump up into the high threes with a shift out of Oakland, but he should still be a solid number three starter for the Nationals.  He may not be the top of the rotation southpaw much of the media will try to convince fans of, but he’s not a bad pitcher by any means.  The prospects Oakland got in return weren’t exactly elite though.  The A’s won’t particularly a better team in the future with the infusion of Milone, Norris, Cole and Peacock but they certainly be worse.  They weren’t likely to compete even if they held onto Gonzalez though.  The Nationals aren’t losing much in terms of future production and Gonzalez makes them a better team now, but not so much better that they’ll be ready to challenge for a division title.  It’s not a lose-lose deal, but neither team is really getting too much better here.  I guess if I were to award a slight edge in this deal it would be to the Nationals.