The long ball. Once the focal point of baseball throughout the late 1990s and into the early 2000s, it is now very much still apart of the game, but one that has seen its frequency cut dramatically due to the implementation of strict PED testing. However, that testing doesn't keep players from finding power surges of their own from year-to-year. This series will look at ten players who had a minimum of 350 plate appearances in 2011 and saw an increase of at least 15 or more dingers this season.

Adam Dunn
2011 HRs: 11
2012 HRs: 41
Difference: 30
Moving from the expansive ballpark in Washington — where Dunn had hit 38 home runs in back-to-back seasons — and into the homer-friendly "Cell," it was thought to be certain that Dunn would continue to hit home runs at a top-level pace. 496 plate appearances and 11 home runs later, we were not only wrong, but completely baffled by what had occurred to Dunn. It was a historically bad season in which Dunn hit only .158 with a sub-.300 on-base percentage — Dunn's previous low OBP was .356 (2010).
Maybe it was the pressures of his first true long-term contract. Maybe it was an adjustment to the American League and to not playing defense on a daily basis. Obviously, Dunn put too much pressure on himself and my general observation was that he was dipping his back shoulder too much too often, turning an already long swing into one that would not only produce more strikeouts, but more pop-ups as well. Sure enough, Dunn saw his strikeout rate shoot to a career high 36-percent as well as a an infield pop-up rate of about 13-percent, something he hadn't done since 2005 according to FanGraphs. However, despite his miserable season and the reasons behind it, I predicted that he would resume doing what he had done for his entire big league career.

…Dunn's track record speaks for itself. If there's anyone in the game who has a chance to do a complete 180 for next year, it's Dunn. We have about 300 plate appearances worth of straight-up miserable production, but we also have about 6000 more plate appearances that suggest he can't be this bad forever. It's not as if he's over the Hill — he won't turn 32 until November — and he still has very good plate discipline (14.6 percent walk rate). This could all come down to something as simple as a mechanical correction in his swing. Whether he fixes that problem in this season's second half or takes the offseason to do so, the chances are that eventually he does work things out. When he does, the power numbers should skyrocket. – From Fantasy Baseball 365, in July of 2011

You can see from the pictures below, that Dunn has made some mechanical adjustments in his stance from 2011 to 2012. 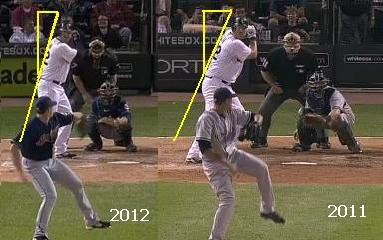 Notice that Dunn is more upright this season (closer to how he looked in video from 2009) and has closed up his front leg a bit. This has lessened his pre-pitch movement and allowed him to be a big quicker on inside pitches — his swing rate on inside pitches is up from last year — and more importantly, cover outside pitches much more effectively.

He found even more of a differential on pitches put in play down the middle of the plate, slugging .639 in 2011 and 1.102 so far this season.
Basically, Dunn has returned to form this season and proven that the compounding circumstances that led to a bust of a season in 2011 were a one-year fluke. Eventually, Dunn will enter a decline phase, but for now he looks to keep on going deep, just like he always had before 2011.