This year's free agent crop of catchers is rather thin with only three players that can truly be considered every-day starters and GMs looking to add a starting catcher this offseason are going to have to do their due diligence in choosing who to pursue. Can A.J. Pierzynski can repeat his career year at age 36? Can Russell Martin continue to stay healthy enough to put up the solid power numbers he has over the past two seasons? Is Mike Napoli worth a long-term investment given his falloff this past season?

Note: This list does not include players with club options. 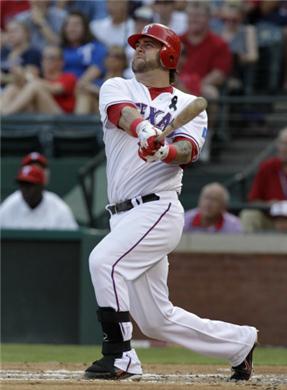 1. Mike Napoli – As far as power and patience at the plate goes, Napoli is the cream of this year's free agent catcher crop. Though he battled through some injures this past season, and regressed from his career best 2011 numbers, he still got on base at a .343 clip while blasting 24 home runs. While Napoli's defense will never be a big attribute, he has refined that part of his game enough to not be a big negative factor behind the dish. Even as his skills erode as a catcher, his power will allow him to slide into a primary 1B/DH role toward the end of his next contract.

Early prediction: Texas has the cash and wants Napoli's bat back between catcher and first. 5 years and around $72M.

2. Russell Martin – While Martin struggled to hit for AVG this season (.211 with no help from a career low .222 BABIP), he still drew walks in 11-percent of his plate appearances and launched 21 homers. Power and plate discipline are valuable assets to find in a catcher that works well with a pitching staff and the fact that Martin is the youngest of the top-three free agent catchers also works in his favor. He won't get Mike Napoli money or length of contract, but he should see a raise coming with a few multi-year deals on the table.

Early prediction: Ultimately, the Yanks know that their top catching prospect, Austin Romine, is a couple of years away and if they want to continue to compete in the AL East, they'll need Martin's power bat in the lineup. 3 years and around $27M.

3. A.J. Pierzynski – After never hitting more than 18 home runs in a single season, Pierzynski busted out with 27 dingers this past season at the age of 35. Aside from the huge jump in power, the rest of A.J.'s skill set remained mostly unchanged; he still held a low strikeout rate, but also continued to show a lack of plate discipline. Ultimately, his age is going to limit what teams should be willing to offer, which leaves the door open for him to return to Chicago on a one-year deal if the market is weary of a massive regression. Any team looking to add A.J. should be looking to contend, which also limits who should be interested.

Early prediction: I would hope that in this day and age every team has smart player analysis personnel on-hand that will see a massive regression coming — catchers are typically out of baseball by their mid-30s, not blowing past their career high in home runs. Pierzynski finds that teams are more willing to go with young and inexpensive options and he accepts a one-year deal that brings him back to the south side where he can platoon with right-handed power hitting catcher Tyler Flowers should his skills fall off sharply. 1 year and around $8M.

4. David Ross – Ross just completed his tenth year of his major league career and while he's never been an every-day player, he has certainly earned the respect of managers and general managers alike. Though he has never appeared in more than 115 games in a single season, Ross is about as solid of a back-up as any team will find with the ability to hit a few home runs in his limited playing time.

Early prediction: Given the recent shoulder surgery performed on star catcher Brian McCann, the Braves — Ross's employer of the past four years — will want him back given his familiarity with the pitching staff and ability to hit for extra bases should McCann suffer any setbacks. 1 year and around $2M.

5. Gerald Laird – Laird performed admirably while star catcher Alex Avila was on the DL, hitting .282 with a .337 on-base percentage in 191 plate appearances. He should once again find work as a big league back-up.

Early prediction: The Tigers bring Laird back to back-up Avila once again. 1 year and around $1.35M

6. Kelly Shoppach – Some pop, solid skills behind the plate and the ability to lead a pitching staff make Shoppach a decent asset to any major league club. However, with the good comes very little production in terms of AVG/OBP. Bottom line: his work behind the plate and veteran presence will continue to earn him a part-time big league job.

Early prediction: The Giants bring Shoppach in to back-up Buster Posey, giving Shoppach more playing time behind the dish than he would have gotten elsewhere when Posey shifts to first base on given days. 1 year and around $1.75M.

Early prediction: The Mets bring Paulino back and give him a shot to platoon with left-handed hitting Josh Thole. One year and around $975K.