What do you get when you mix a couple of World Series heroes with a bunch of middle-of-the-road middle infield free agents? Why, this top 10 free agent list of course! 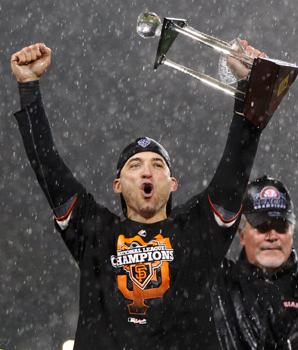 Early prediction: Unfortunately for Giants fans, his heroism over a small sample size will probably influence the front office to bring him back (i.e. Aubrey Huff after 2010). Scuatro is 37, so pray that if he does come back, it's only on a one-year deal. 1 year, around $7.5M.

2. Kelly Johnson – Johnson's inconsistent career continued in 2012, as he once agian hit for a low AVG/OBP and saw a drop-off in power numbers from 21 homers in 2011 to only 16 last year — along with an extremely poor .365 SLG. Still, he provides the power/speed combination that is impossible to find among the rest of this year's middle infield free agent crop. He's still relatively young (31 in February), so I wouldn't be surprised if there are some multi-year offers on the table.

Early prediction: The slugging Blue Jays liked Johnson before, and I don't think they are ready to trust Adeiny Hechavarria just yet (if ever). 2 years, around $12.25M.

3. Stephen Drew – At one point, Drew was a steady glove that could hit double-digit home runs with an AVG/OBP that wouldn't kill an offense. Unfortunately, he has been unable to play in only 165 big league games over the last two seasons. Being one of the younger middle infield options — and a solid shortstop — Drew is sure to find work, but it will likely come on a one-year, incentive laden deal.

Early prediction: One-year, incentive laden sounds like a perfect fit in Oakland, where Drew spent half of his 2012 season. 1 year, around $4M plus incentives.

4. Jeff Keppinger – One of the more valuable free agent signings of the 2012 offseason, Keppinger accrued a career-best 2.8 fWAR while hitting .325/.367/.439. While no team should expect the soon-to-be 33-year-old to duplicate those numbers in 2013, there should be plenty of interest in Keppinger's excellent contact skills and the ability to play adequately around the infield.

5. Maicer Izturis – After a long stay in Anaheim, it looks like Might Maicer will find a new home this offseason. While he doesn't do any one thing great, he has plenty of skills that multiple teams will look to acquire. He can play all over the infield, doesn't strike-out often, can steal a few bases and punch a home run every once in a while.

Early prediction: As was evident in the playoffs against the Giants, the Cardinals are far from set in the middle infield and look to add Izturis for his flexibility. 1 year, around $3.5M.

6. Jason Bartlett – After putting together an out-of-nowhere career year in 2009, Bartlett has declined in each season since. In 2012, a knee injury ended any chance for yet another regression. Still, players like Bartlett — experienced with a chance to get healthy and be an above replacement asset — find work.

Early prediction: Bartlett heads back to where his big league career began, Minnesota. 1 year, around $2M plus incentives.

7. Alex Gonzalez – At this point, the one thing that Gonzalez has in his favor is a track record of good defense and the ability to pop a few baseballs out of the yard. He'll be 36 next season with a career OBP under .300, so don't expect much in terms of a guaranteed deal as he tries to come back from an injury plagued 2012.

Early prediction: To add some depth, the Mets give Gonzalez a shot. 1 year, around $1M plus incentives.

8. Orlando Hudson – Hudson is defineitly in decline, but his experience and locker room presence will keep teams interested should he accept a backup role.

9. Ryan Theriot – Theriot was thee definition of a replacement level player in 2012 (0.0 fWAR) and has pretty much been just that since 2010. Still, he seems to find work and win championships…not that that makes him worthy of either in 2013 mind you.

10. Freddy Sanchez – Needs to actually stay healthy, but his potential to hit .290-.300 will intrigue teams enough to get him a chance in spring training.