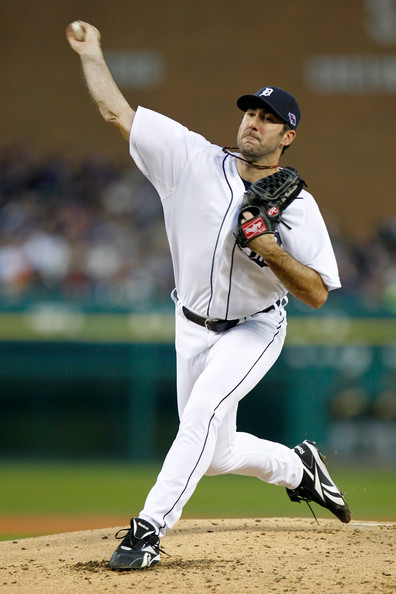 The Detroit Tigers, led by ace Justin Verlander, beat the Oakland A's 3-1 in game one of the American League Division Series on Saturday night to take a 1-0 series lead.

Verlander's evening had a shocking start, as he allowed a lead-off homer to Coco Crisp to send Oakland to a 1-0 lead. But that would really be all for the A's, who never had more than one runner on base over the rest of the game, and only had one runner in scoring position all game. It really was a tough go for Oakland against Verlander, who finished by allowing just the one run on three hits over seven innings, walking an uncharacteristic four hitters and striking out 11.

The Tigers didn't stay behind for long though, as Miguel Cabrera brought a run home with a double play in the first inning off of Jarrod Parker to tie the game at one after an Austin Jackson double and Quintin Berry infield single put runners on the corners with none out. Detroit would take the lead against Parker in the third, when Omar Infante doubled with one out in the inning and scored on a fielding error by Parker on what would be the third out on a dribbler down the first base line. The Tigers tacked on an insurance run after an Alex Avila solo homer in the fifth to take a 3-1 lead, the score they'd eventually win by. Parker really didn't have a bad day for the A's, allowing just the pair of earned runs on seven hits over 6 1/3, striking out five and walking only one.

For the A's to have won this game, Parker needed to keep them close, which he did. But the go-ahead run that he literally tossed away would end up being the one that decided the game. Verlander was absolutely on point, and with him on the hill, you knew it would be an abbreviated outing for the Tigers bullpen. It was, and that was that for the A's.

On a more sentimental note, Pat Neshek threw 2/3 of an inning in the seventh for the A's. Neshek lost his newborn son after less than 24 hours earlier this week, and he must have been pitching with an incredibly heavy heart. He retired both batters he faced, including striking out Austin Jackson before pointing to a memorial patch that all of the A's players are wearing for his late son and then pointing at the sky. What a great moment.

Game two will be Sunday, and the teams will get little rest with a 12:07 PM eastern first pitch. Tommy Milone will take on Doug Fister, and the A's have to look at this as a must-win. You don't want to be down 0-2 going back home with Verlander looming again in game five of the series. Milone's struggles on the road are well documented, and a solid outing would do a lot towards helping Oakland's goal of advancing to the ALCS.