We’re about one month away from the post season and the advent of the second wild card has more cities across America intensely rooting on their teams than ever before. While our hearts and minds are focused on the current playoff push, it’s also a good time to remind ourselves that the current success of many of the playoff hunting ball-clubs can be charted back to this past offseason. Below is a list of some of the best offseason free agent signings made by the teams now eyeing a 2012 playoff spot. 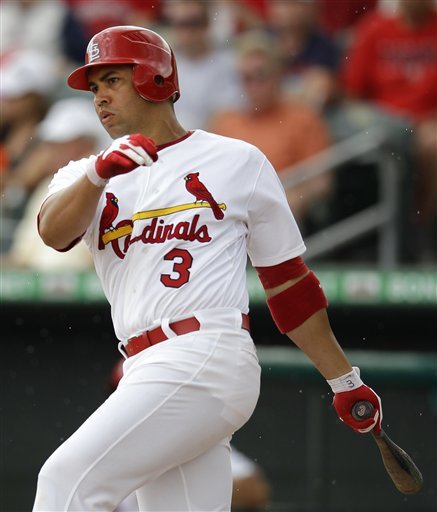 It didn’t take long for St. Louis to move on from the loss of Albert Pujols and, thanks in large part to Beltran, they continue to hunt for a 2012 playoff spot. Beltran’s .836 OPS puts him in the top 20 of the National League while his 28 home runs are the fourth most in the NL.

One criticism is that Beltran has struggled mightily at the dish since July. However, even with the massive second half slump, Beltran has still amassed 2.9 fWAR (Wins Above Replacement according to FanGraphs) and has roughly earned his $13M salary already. Should the Cardinals make the postseason, he certainly has the skills to breakout once again in October.

The surprising A’s continue to turn heads as they seemingly refuse to lose down the home stretch and Crisp has been a huge part of that success. Health has always been an issue with Crisp, and he has missed some time this season, but when on the field the production on both offense and defense has been evident.

Though he’s only hitting .258, Crisp still gets on base at a league average clip and his stolen base prowess has not only been above average, but extremely efficient as well. Crisp is 31 for 35 (89-percent) in stolen base attempts, a huge positive in terms of not giving away outs.

On the defensive side, Crisp has been above average in terms of his range, playing his part in keeping the A’s pitching staff’s BABIP at a MLB low .276.

When the Rays signed Rodney to a $2M deal in the offseason, it seemed like a very “unRayslike” move. After all, Rodney had not posted an ERA or xFIP under four since 2007 and last season while with the Angels, he posted a higher walk rate than strikeout rate. However, a slight mechanical change – eliminating a high leg kick to start his delivery — seems to have changed everything. Not only does Rodney boast a dominant 0.73 ERA, but the improvement in his K/BB ratio is astounding.

Rodney has always had electric stuff – which is why teams continued to give him chance after chance – but now he has added elite control and command to the package, one that has been worth 1.8 fWAR to date at the cost of only $2M.

The Orioles might very well be the biggest surprise in baseball and to become a surprise team, you have to have some surprising performances. It’s always tough judge expectations for international players, but the Orioles made a fine judgement when signing Chen. To-date, Chen has posted a 3.79 ERA and 4.29 xFIP. He has also made 27 starts and logged 163.2 valuable innings while providing 2.3 fWAR at the mere cost of just over $3M. Though his .267 BABIP against seems like an indication of regression in the future, there’s no doubt that the O’s have made out like bandits with regard to what they are paying Chen in 2012 and perhaps already the deal as a whole.

Despite getting up there in age and moving from the NL West to the AL East, Kuroda has done nothing but continue to be a vastly valuable pitcher. With a 3.04 ERA, 183.1 innings pitched and 3.4 fWAR (tied for eighth most in the AL), Kuroda has already earned the $10M the Yanks dished out to acquire his services in the offseason.

It seems like light years since Ludwick was a surprise star slugging 37 home runs for the Cardinals. Four years and some so-so seasons later, Ludwick has made another big impact for the team with the best record in the National League. With 25 home runs in only 404 plate appearances and the ninth best OPS in the NL, he has provided much more value than the cost of his $2.5M salary.

It might seem odd to see Jonny Gomes on the list of best offseason signings, but he has done everything the A’s expected him to do and a bit more. Gomes has always crushed lefties and this season has been no different (nine home runs and a .919 OPS vs LHP so far this season). However, he has even provided some value against righties as well, posting a slightly above average .339 OBP while blasting six home runs in 118 plate appearances. While Gomes’s overall numbers don’t look overly impressive, if you consider what he has done in the role he was meant to play, his value easily exceeds the $1M he signed for in January.

Personally, I’ve always liked Keppinger. He can play a few different infield positions, doesn’t strike out a lot at the plate and will pop the occasional long-ball. In 88 games and 312 plate appearances for the Rays this season, Keppinger has exceeded expectations to the tune of a .331 batting average and excellent .379 OBP. Defensive metrics bump up his fWAR, but I would put a little caution in using those as a definite judge of his worth. Regardless, $1.575M is not a lot to pay for a versatile player who has provided a ton of value with his bat.

Chavez, at one point in his career, was a superstar. However, the last five or so years have been a struggle with both staying on the field and then producing when healthy. This season, Chavez has experienced a minor resurgence as a part-time player for the Yankees. He has now played in his most games since 2006 while putting up an impressive line of .291/.347/.498. His health may very well be a struggle once again in the next few years, but for now the Yanks are enjoying the rewards of their relatively speaking small investment.