It’s so very easy to get lost in the numbers and endless online analysis. It’s easy to forget that the minor leagues are about more than just production, they’re also about development on and off the field. While players don’t face nearly as much media scrutiny at the minor league level as they do in the big leagues, they are certainly subjected to the awesome quirkiness that is minor league baseball.

Unique promotions and in-between inning on-field games are an ingrained part of the minor league mantra and the players, though sometimes reluctantly so, are part of the fun. Earlier this season, the Visalia Rawhide held their second annual “Belle of the Ballpark” contest. During the game, the contestants – all women at least 65 years or older – would compete in several in-between inning events such as a cheek pinching contest and a white t-shirt contest. Helping out with these games were none other than two of the Diamondback’s top pitching prospects: David Holmberg (pictured) and Andrew Charin. While it seems that most players would just as soon remain in the dugout, being a part of this type of fan entertainment helps to remind the players that the game of baseball is about the fans. After all, these players are being paid to play a game. After the cheek pinching contest, both Holmberg and Chafin were welcomed by their teammates back to the dugout with some more playful cheek pinching and a lot of laughs.

A simple, yet necessary reminder that this is still a child’s game.

Sometimes, players actually want to be involved with the quirky bus league promotions. In Lake Elsinore (High-A affiliate of the Padres), teams seem more than happy to participate in the Grounds Crew Gorilla routine, in which the visitors get to beat the lovable gorilla with Styrofoam sticks.

Then, there are those players who are willing to go above and beyond; as in those players willing to milk a cow and then drink said milk, as is the case on Dairy Day, an annual promotion of the Visalia Rawhide. 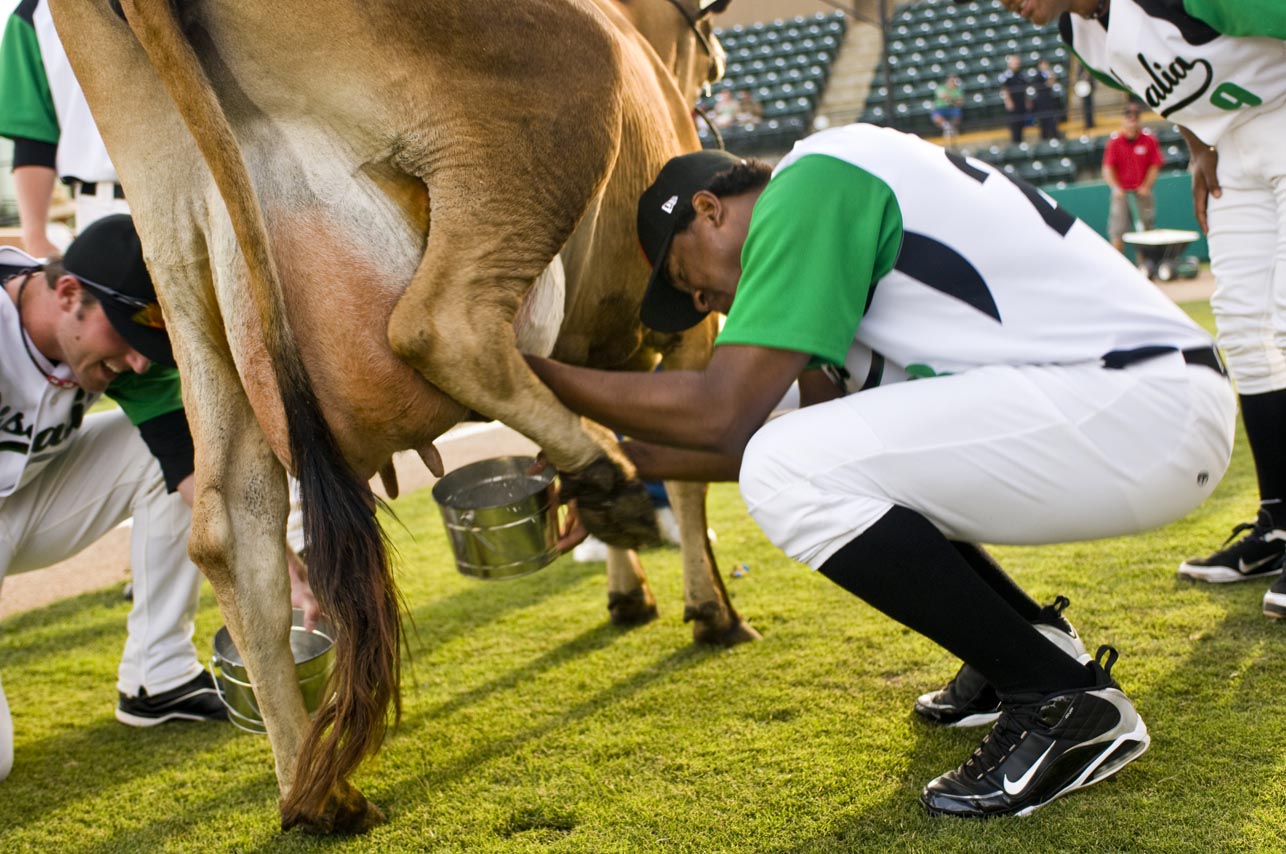 Of course, not all participation is fun, or easy.

Part of being a minor league baseball player is giving back to the community. Sometimes that means visiting a hospital or making a service club appearance, Sometimes, it means facing your fears and speaking in front of hundreds of elementary school students.

Andrew Chafin, who just happens to be the minor league leader in strikeouts with 77 in 58.2 innings, stood alongside teammate Bo Schultz in front of a few hundred elementary students to talk about making good decisions and being a leader rather than a follower. Chafin, a dominant bulldog on the mound, but a somewhat reserved character off the field, said me after speaking briefly in front of the kids, “I’m literally shaking right now…I’m fine pitching in front of 20,000 people, but this is nerve-racking.” There I was, standing next to one of the nastiest pitchers in minor league baseball, a guy who has a chance to develop into a two or three starter in the big leagues, and his knees are shaking from talking in front of a group of children much like his slider makes the knees of his opponents shake in awe of it’s sharp bite.

It’s part of the process, part of the character development of each and every one of these players. As they head toward the big leagues, it doesn’t get any easier. Not only dot the crowds get bigger, but the social demands do as well.

The minor leagues are about so much more than just a pitcher developing his offspeed stuff, or a hitter smoothing out his swing. It takes mental strength to sustain a big league career. It takes the ability to not only grind through a 162-game season, but to also grind through the demands of the media and community. It also helps to find those precious moments that remind all of us that baseball is a game; a child’s game. A fun game.